Sometimes your idea of something is so much better than it actually is.

Take Lombard Street, for example. Dubbed the “crookedest street in the world,” the famous block between Hyde and Leavenworth is the subject of many an overpriced postcard.

The block began as a straight cobblestone street with a 27% grade. In the 1920s, the residents wanted cars, but the hill was too steep for vehicles. The landowners approached city engineer Clyde Healy, who came up with the design.

When the two-way brick-paved street was constructed in 1922, the curved switchbacks were installed and the grade was reduced to 16%. The street consisted of eight turns and approximately 250 steps on each side.

When the work was completed, people could drive up and down, and the property values rose.

One resident on the block, Peter Bercut, bulldozed all the plants and started planting flowers on the curves of the block. After a trip back to his native France, he had the idea to plant hydrangeas.

In the late 1950s, a photograph showing the hydrangeas in bloom was published, and in 1961 was printed on a postcard. Soon thousands of tourists were coming to visit.

The street was made one-way in 1939. In its high season, summer weekends, as many as 350 cars per hour drive down the block.

And with all the hype surrounding it, wouldn’t you want to visit too?

By now, I’ve realized that my idea of Lombard Street is more beautiful than it actually is. Because—let’s face it—what it actually is is a zigzag downhill residential drive.

I can’t imagine living in one of the houses there, being inundated with flashing cameras every time you head out. It might be fun to pretend you’re Kim Kardashian for a week, but that gets old.

It’s not the best experience for a sightseer either. There’s only one thing to do around here—take photos. And for this purpose, Lombard fails terribly.

First, tourists are everywhere in this area. Everywhere. You need actual skill to take snapshots of the place without capturing a big group of tourists along with it.

Second, cars drive down the street at an appalling rate. While there is a speed limit, there’s no ugliness limit. If you enjoy looking at cars, you might not mind. But for someone like me, for whom a car is just a large piece of machinery to get you from Point A to Point B, it gets annoying very quickly when they get all over my Lombard photos.

It doesn’t help that there’s a huge Do Not Enter sign in front of the whole street. This sign is captured in pretty much every picture ever taken here, ever.

So how exactly do you take a good photo on Lombard Street?

Idea # 1: Capture a smaller part of the scene so as to statistically end up with fewer unwanted elements (tourists, cars) in your picture. Try a close-range selfie, which allows you to stealthily hide an enormous car behind your head. 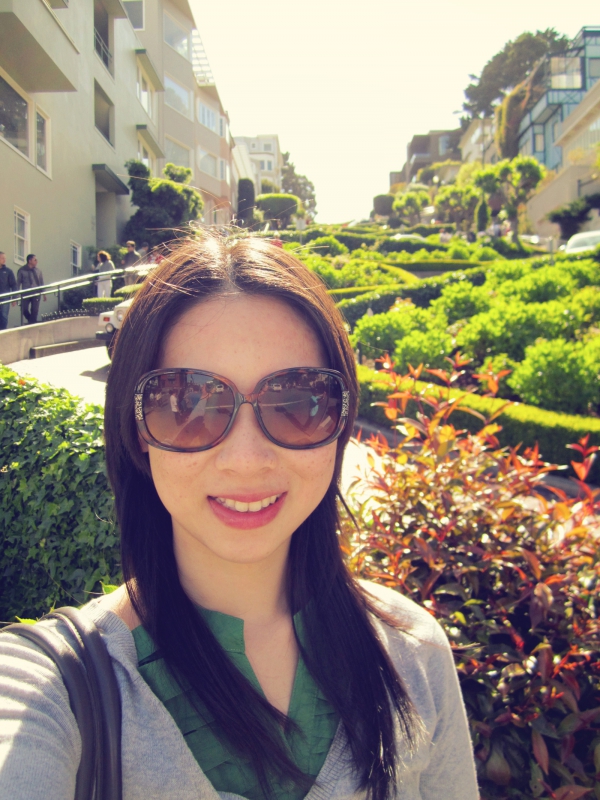 Idea # 2: Visit the place with someone you know who has a reasonable amount of patience. Your brother, for example. Strike a pose and hold it. Have him stand there and wait until he can capture a perfect shot with a minimum of unwanted elements in the background. 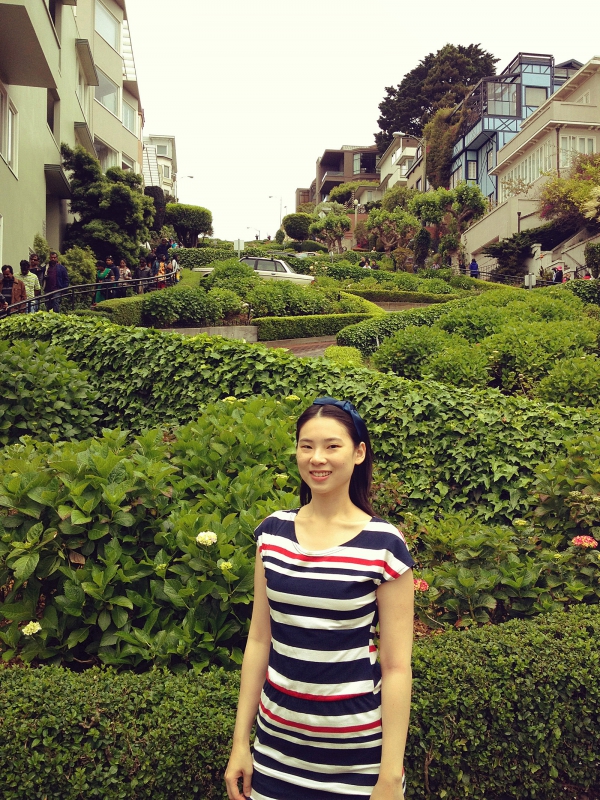 Idea # 3: Take your photo from across the street. There will still be cars, but they’ll be smaller. If you wait until a car passes, there will be a few seconds when the next car is still inching downhill. Seize the opportunity; take a snapshot. 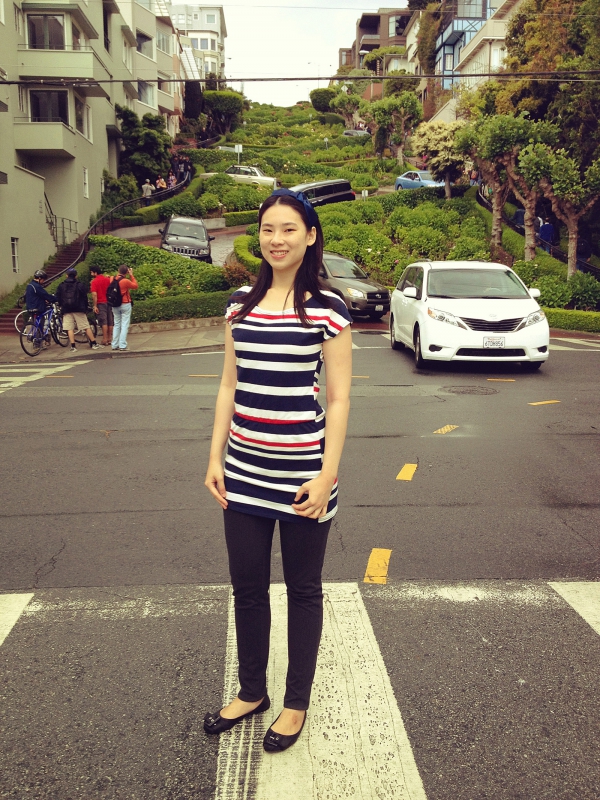 Now I know what you’re thinking. “But Maddy, why are you so busy taking photos when you should be enjoying the moment?” To which I say: There is no enjoying the moment at Lombard Street. It’s a high-traffic residential thoroughfare. This tourist attraction was practically made for street photography practice. Try to capture the best shots while trying not to get hit by a car.

But wait. Before you start thinking it’s all downhill from here (harhar), I’m gonna let you in on a little secret.

The Secret to Enjoying Lombard

People tend to reach the bottom of the crooked street, look around, take their pictures, and leave. Most of them don’t go up the hill because you can’t capture the switchbacks from there (and also because it’s already quite a climb to get to the bottom). It’s an opportunity lost, if you ask me.

I was with my brother the last time I visited Lombard Street. The sky was overcast and it had started drizzling. After our requisite photo op, we climbed to the top of the hill and turned around.

Time stood still. There was a break in traffic and the tourists were all downstairs. Spread out in front of us was a lovely view of the city. The San Francisco Bay, calm and resting on a gray day. The Coit Tower standing high. And the Bay Bridge peeking out from behind the foliage.

I was in San Francisco. And I was with my brother for the first time in months. And in that moment, that was really all I could have wanted.

Is Lombard Street a must-see? If you’re only spending a few days in San Francisco, there are more interesting places to visit. But if you’re staying for a week or two, come around sometime. Go on a weekday and bring someone you love.