Harry Potter Studio Tour: The Making of a Magical World

If you’re not a Harry Potter fan, you might wonder why the story of a boy who goes to a magical school is so well-loved. Yes, it’s an imaginative and well-written series of books—but so are many others. What makes it so special?

Everyone has their own reasons for loving Harry Potter. This is mine:

I started reading the books in late grade school, and the films started coming out in high school. During this time, I felt ill at ease with my life, the way you feel when you go about your day in too-tight clothes. I lived a regimented life mostly driven by other people.

So I read books. They were my favorite escape.

What made Harry Potter so special to me was the world that J.K. Rowling had built—a world where incredible things happened at every turn. Anything was possible and there was so much to discover.

In my first year of high school, I convinced my parents to take me and my siblings to the cinema to see The Sorcerer’s Stone. We watched it at Ever Gotesco Mall, which was appropriately shaped like a castle.

I loved the film. It was a faithful adaptation in both content and spirit. The casting of Harry, Ron, and Hermione was spot on. But what I loved most was how the film brought Hogwarts to life.

Over the years, I not only followed the story, but also read and watched as the magical world in the books expanded with every new release. Like a curtain lifting to reveal so much more than you knew existed.

As someone who loves reading and travel in equal measure, I was excited to visit the country where some of my favorite authors came from. I would see the actual places that inspired their work; the places their stories were set in.

As I researched things to do, I was happy to discover Warner Bros. Studio Tour London: The Making of Harry Potter, which I’d never heard of.

The Studio Tour is located in Leavesden, a residential/commercial area in Hertfordshire, England. In fact, you may not find it if you look for attractions in London. I only found it myself because I searched specifically for Harry Potter related tours.

For more than a decade, the Harry Potter film series used the Leavesden studio as its home base. After filming, the production team had thousands of artifacts left—sets, props, and costumes that had been used for the films. They decided to preserve these for the fans to enjoy. Many of the original cast and crew reassembled the sets and recorded interviews about their memories of filming. In March 2012, the Studio Tour opened beside the actual studios where the films were made.

Based on the research I’d done, I thought I knew exactly what to expect from the Studio Tour. What I didn’t expect was to have my mind blown.

But first things first. As you may recall, N- and I took two of the longest Uber rides ever just to pick up our suitcases. It was almost noon by the time we got back to our apartment. Our Studio Tour reservation was for 12:30 PM.

We quickly freshened up, I finally changed into new clothes, and we went on our way.

We took the Underground, the National Rail (we missed the express and had to take the regular train), and the Warner Bros. Shuttle to arrive at the Studio at 2:45 PM. 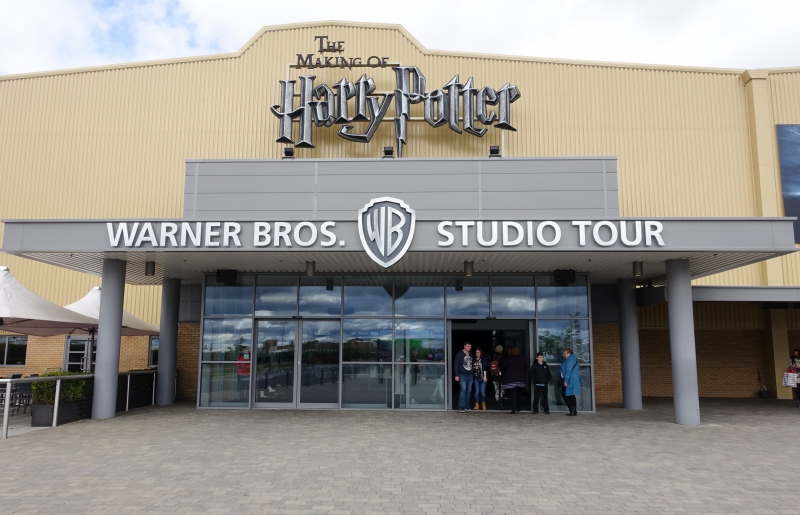 After a quick lunch at the café, we fell in line at the Studio Tour entrance. It was 3:15 PM by this time. Thankfully, neither the ticket machine nor the attendants noticed (or cared) that our tickets said 12:30 PM.

The Cupboard Under the Stairs

This set was beside the line-up area. I wondered why it was in such an awkward location. The line was either moving quickly, or not moving at all, so it was difficult to take pictures. Little did I know that the cupboard was a tiny part of this amazing tour. 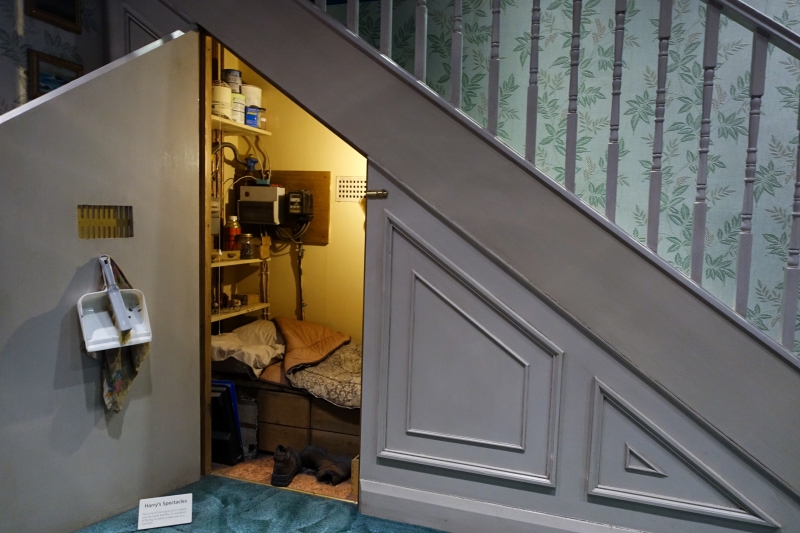 We all filed into a large room for a briefing. Then we were ushered into a theater, where we watched a short video about the making of the films. In the video, Daniel Radcliffe, Rupert Grint, and Emma Watson reminisced about filming and introduced the tour. They were standing in front of the Great Hall’s doors. In the end, they opened one of the doors ajar and slipped in.

The movie screen rolled up to reveal the actual doors of the Great Hall. 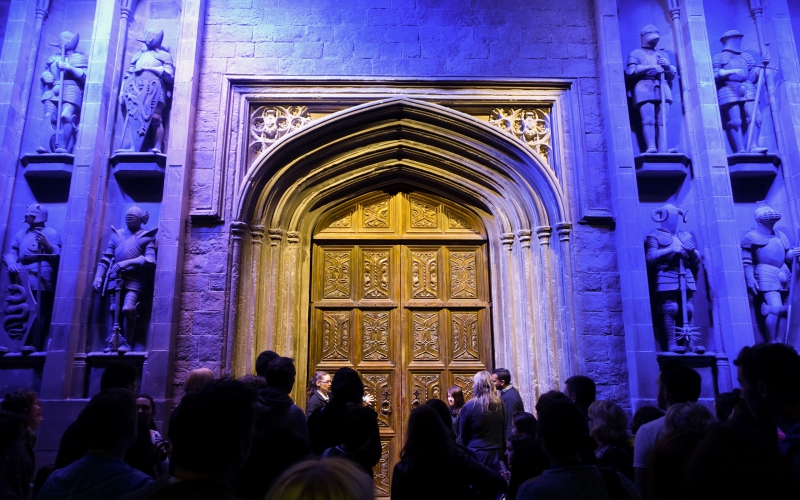 We gathered round. The guide and an audience volunteer opened the doors to reveal the Great Hall. 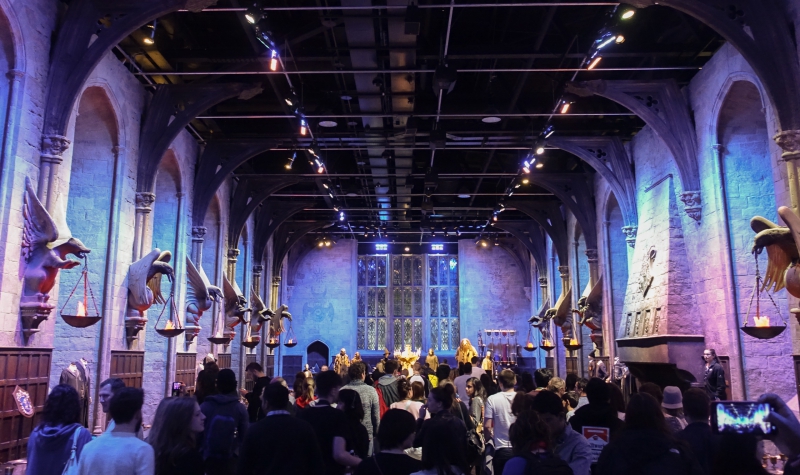 We let out a collective murmur of awe as we walked in.

I felt exactly like the first years must have felt in the story when they entered the hall for the first time. It was magnificent. It was just like the movies.

Out of the 588 sets created for the Harry Potter films, the Great Hall was one of the first to be built, appearing in seven out of the eight movies. It was large enough to seat more than 400 children. The House Point Counter stood behind the teachers’ area, each hourglass containing thousands of Indian glass beads.

The Great Hall was the only part of the Studio Tour that let you stay for a limited time. The rest of the tour was self-guided and you could go at your own pace until closing time.

There were far too many wonderful things in the Studio Tour, so I’m not going to to talk about all of them here. But these were my favorite parts. 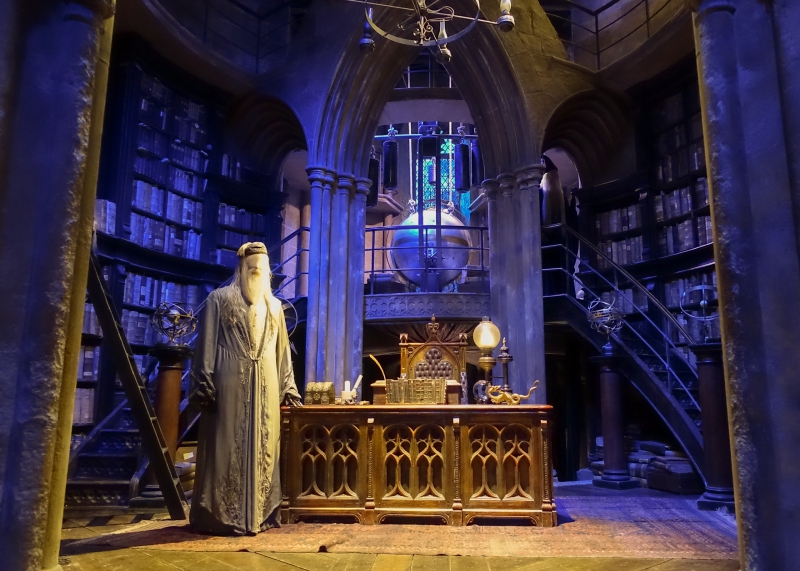 This set was first built for The Chamber of Secrets. Supposedly located in one of the highest towers of Hogwarts, it contained one of the most expensive props they made—a working telescope that was rarely seen on screen. This set also featured Dumbledore’s memory cabinet, for which the Prop Department hand-made and labeled 800 small vials.

These were originally built as two connected sets. The common room staircase spiraled up to a hallway going in two directions: one leading to the boys’ dormitory and one going nowhere.

The common room looked warm and cozy. I especially liked the wall mural.

The knitting needles were knitting and the pan was washing in the sink. These were functioning mechanical gadgets.

The Weasley clock was there as well. It was customized from a grandfather clock bought at an auction. 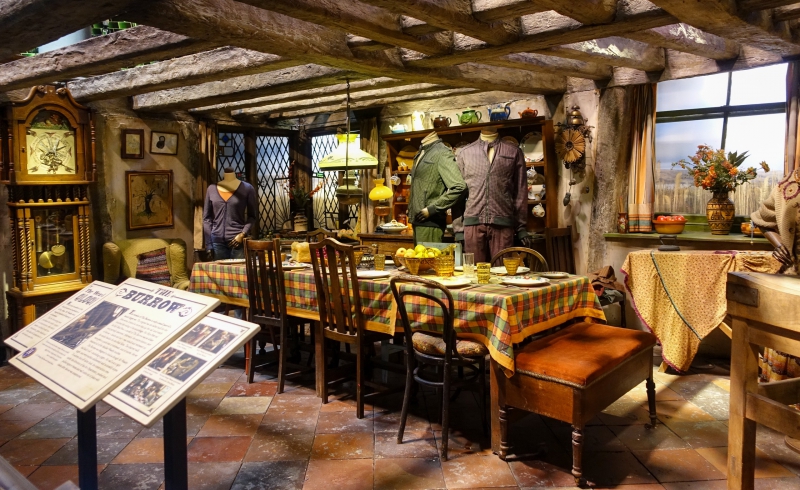 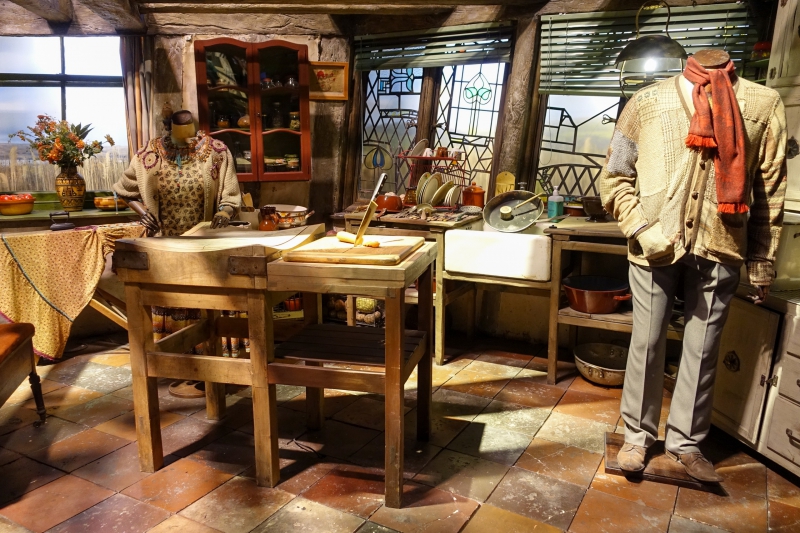 Introduced in The Order of the Phoenix, the atrium was the largest set created for the films. Only a small part of it ended up in the Studio Tour. The design was inspired by Victorian architecture. The tiles looked authentic, but they were actually made of fiberboard. 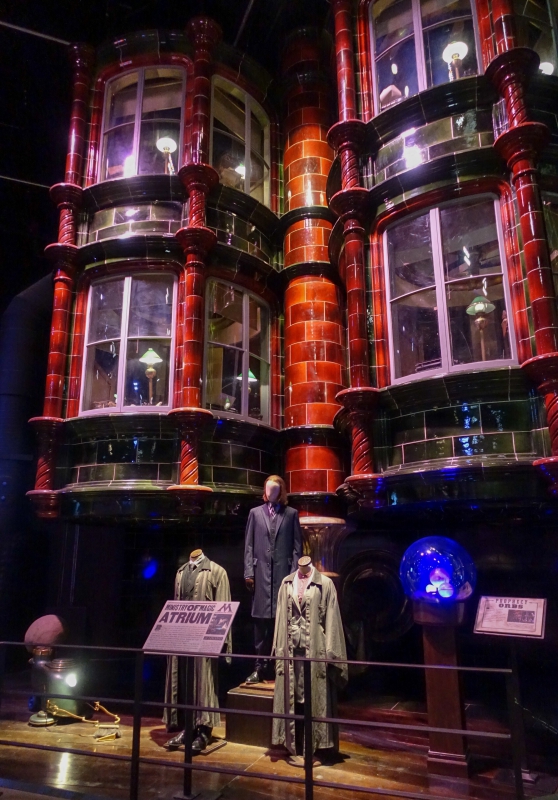 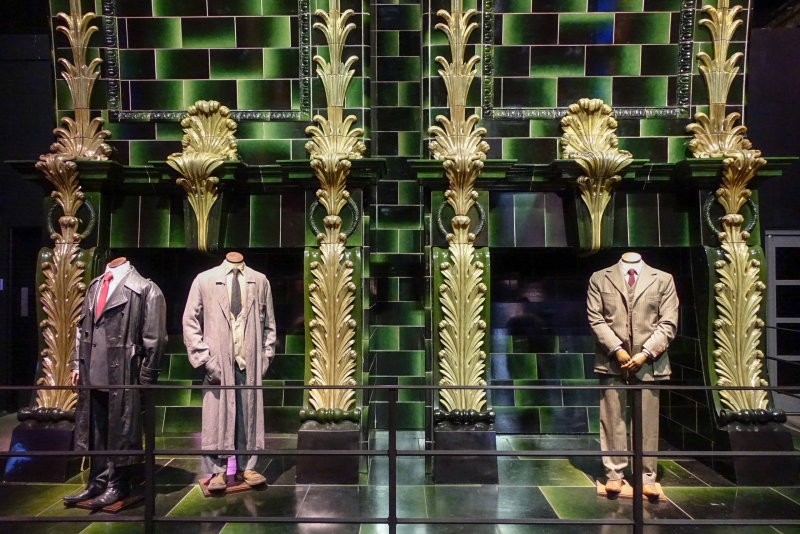 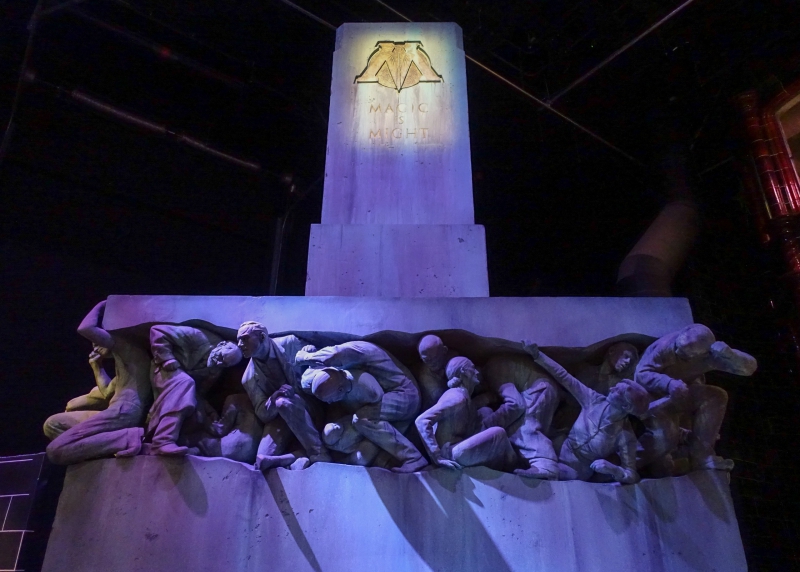 This set was used for several purposes: Slughorn’s classroom, Snape’s office, and the room where Fluffy guarded the trap door. But it was most well-known as the Potions classroom. It featured hundreds of jars and bottles on the walls, all containing ingredients such dried leaves and animal bones from the local butcher. 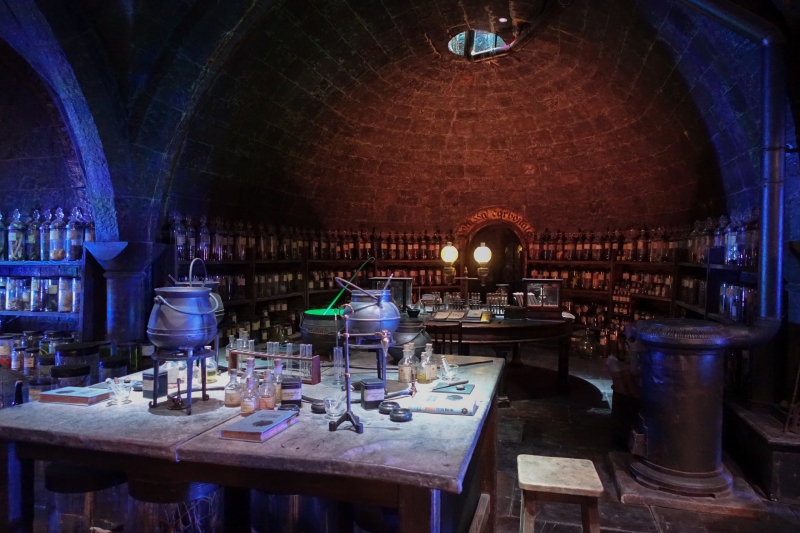 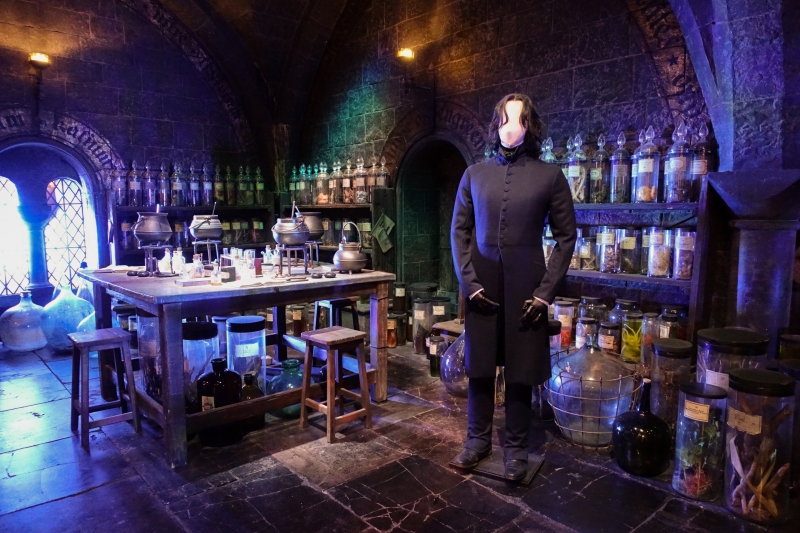 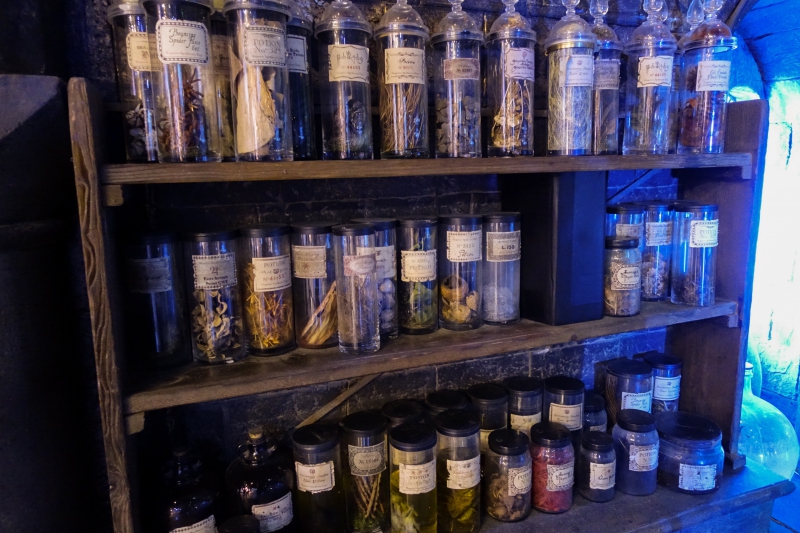 They actually made two versions of Hagrid’s Hut—this regular-sized one, and a smaller one to make Hagrid look bigger. 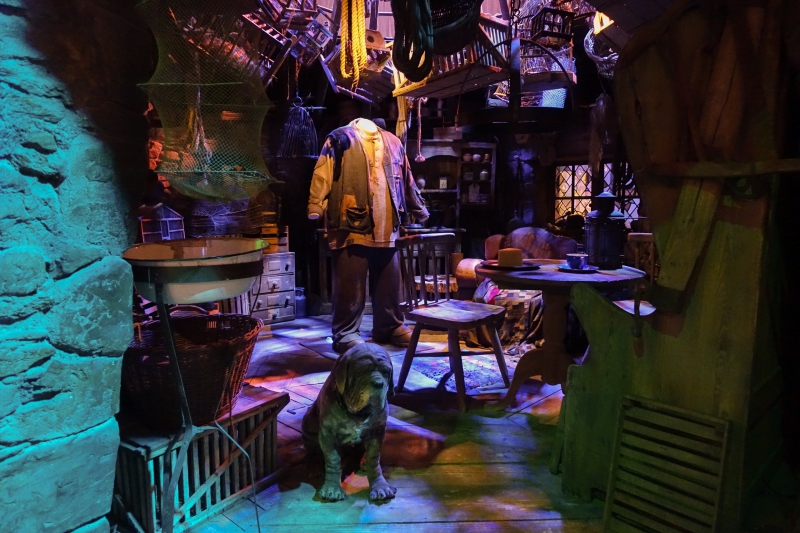 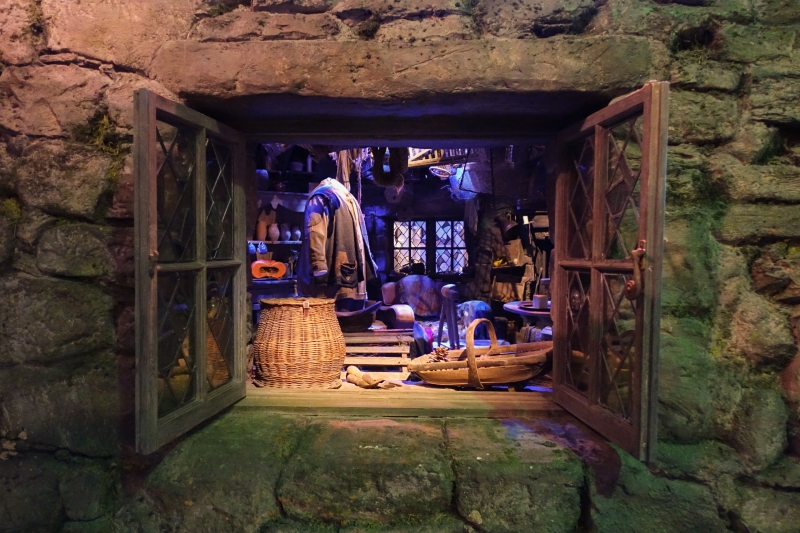 This set depicted the Death Eater meeting where Voldemort killed Charity Burbage, the Muggle Studies professor. She was a robot swinging over the dinner table. 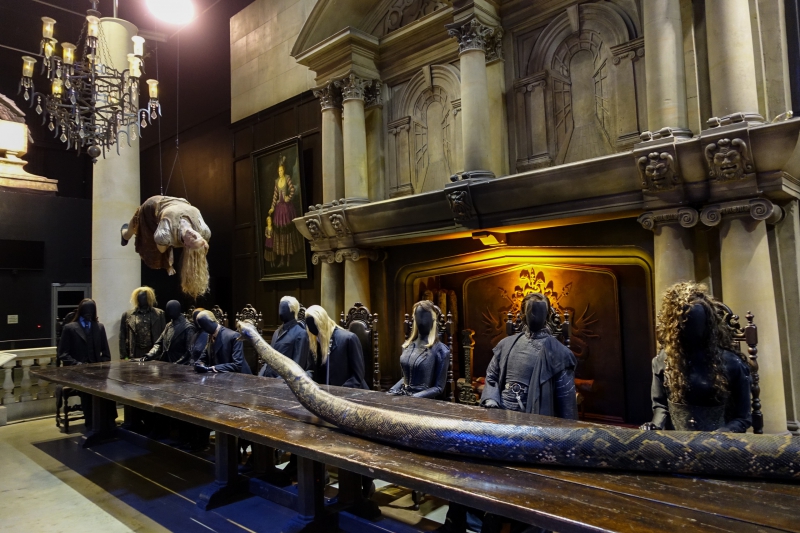 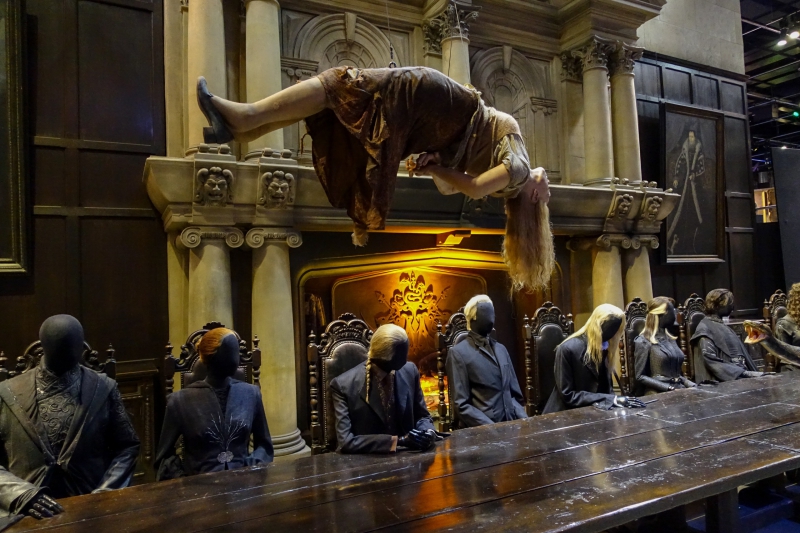 A lot of costumes were on display. I especially liked Fleur’s Beauxbatons uniform.

The Prop Department hand-crafted thousands of objects for the films. There were gadgets and gizmos aplenty, from detailed entrance doors to small coins and jars.

It was wonderful to see the door to the Chamber of Secrets. Built by the Special Effects Department, it featured snakes that mechanically slithered along the slotted tracks, powered by an electric motor behind the door. 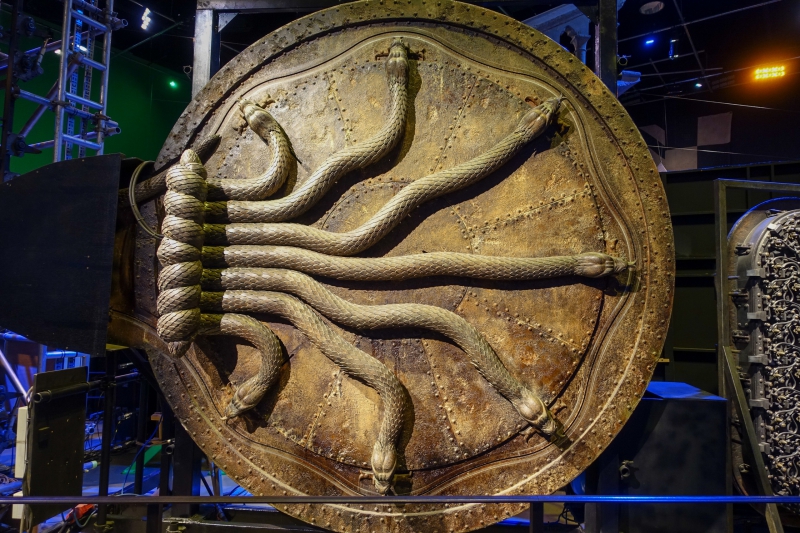 I liked that you could step inside and peek into the cabins, where various props used in the train scenes were displayed.

There was a lot to see in the first sound stage, so it was where we spent most of our time. Little did we know that we were only half done with the tour.

In Part 2, I cover my favorite parts of the backlot and the second sound stage—including the most impressive masterpiece in the Studio Tour. See Part 2 here.