This is the second of two posts about Warner Bros. Studio Tour London: The Making of Harry Potter. See Part 1 here.

After the first sound stage, we enjoyed some butterbeer at the backlot café. It was a beer-colored cream soda topped with whipped butterscotch cream. 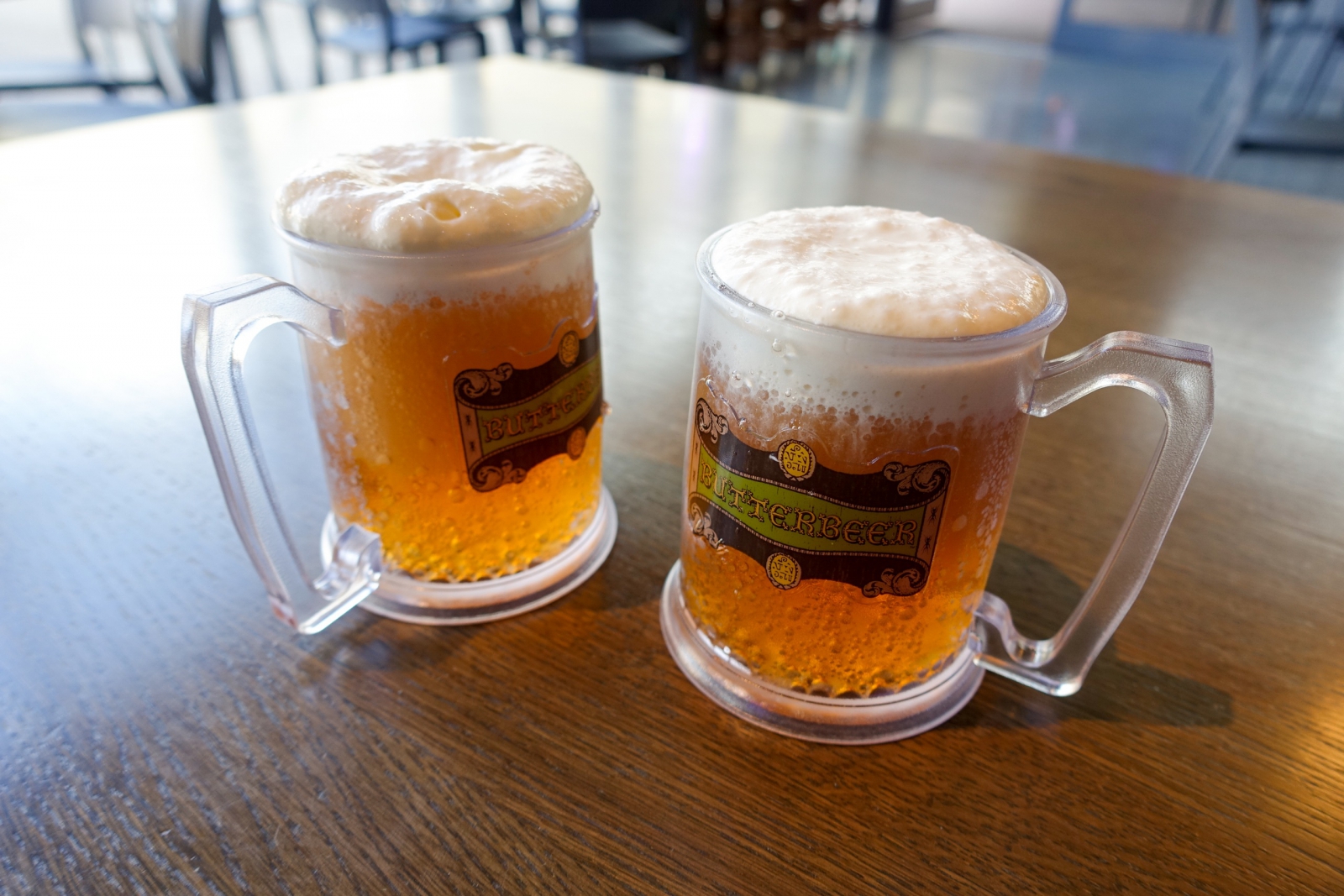 Then we went out to the backlot, an open area featuring outdoor sets.

The Knight Bus first appeared in The Prisoner of Azkaban. This triple-decker bus was built out of parts from vintage double-decker buses. London streets were shut down so the film crew could drive it through the city. Given the bus’s height, the route had to be mapped out carefully. 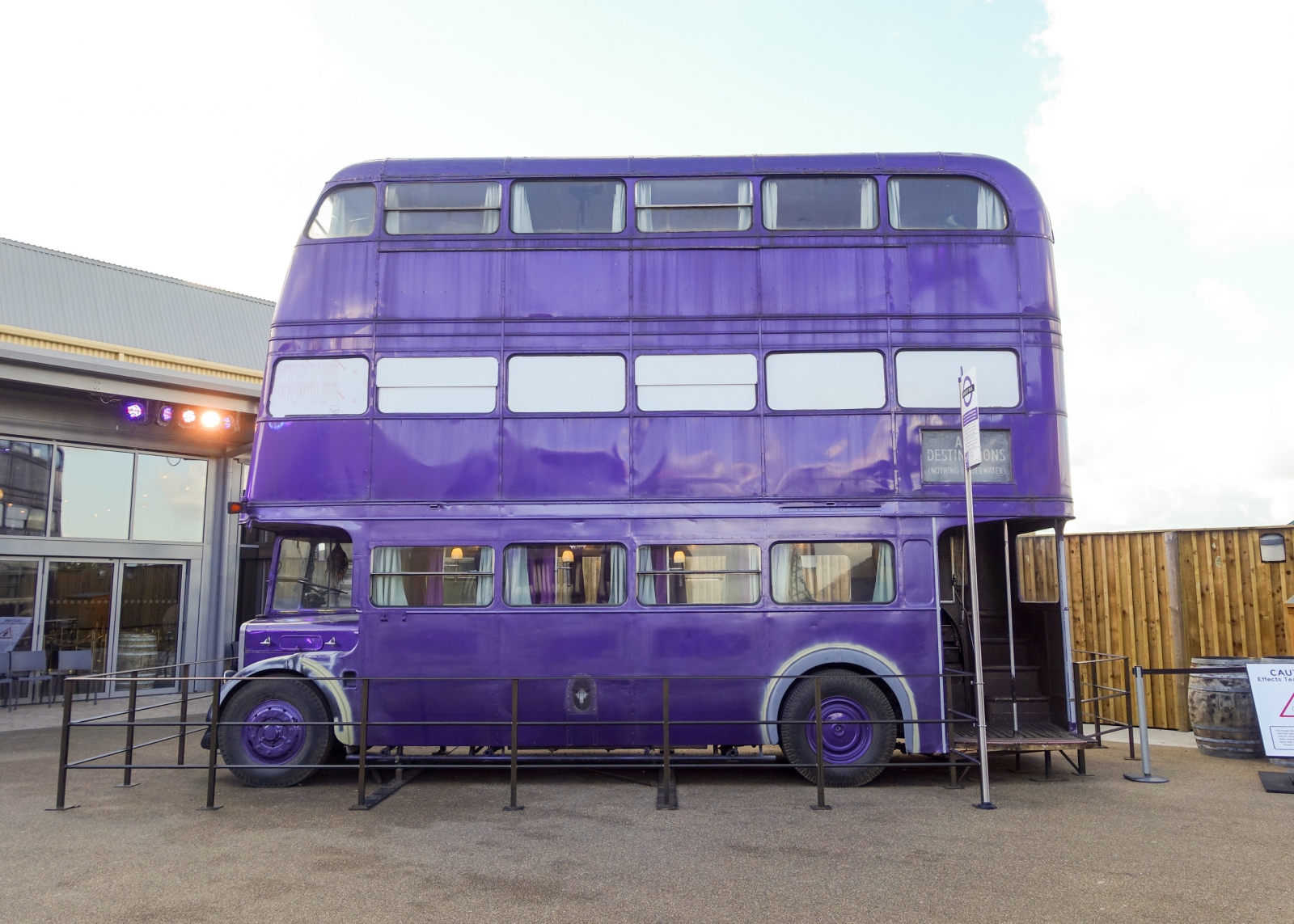 In The Sorcerer’s Stone, No. 4 was filmed at a real house. They recreated it in the studio for the subsequent films. 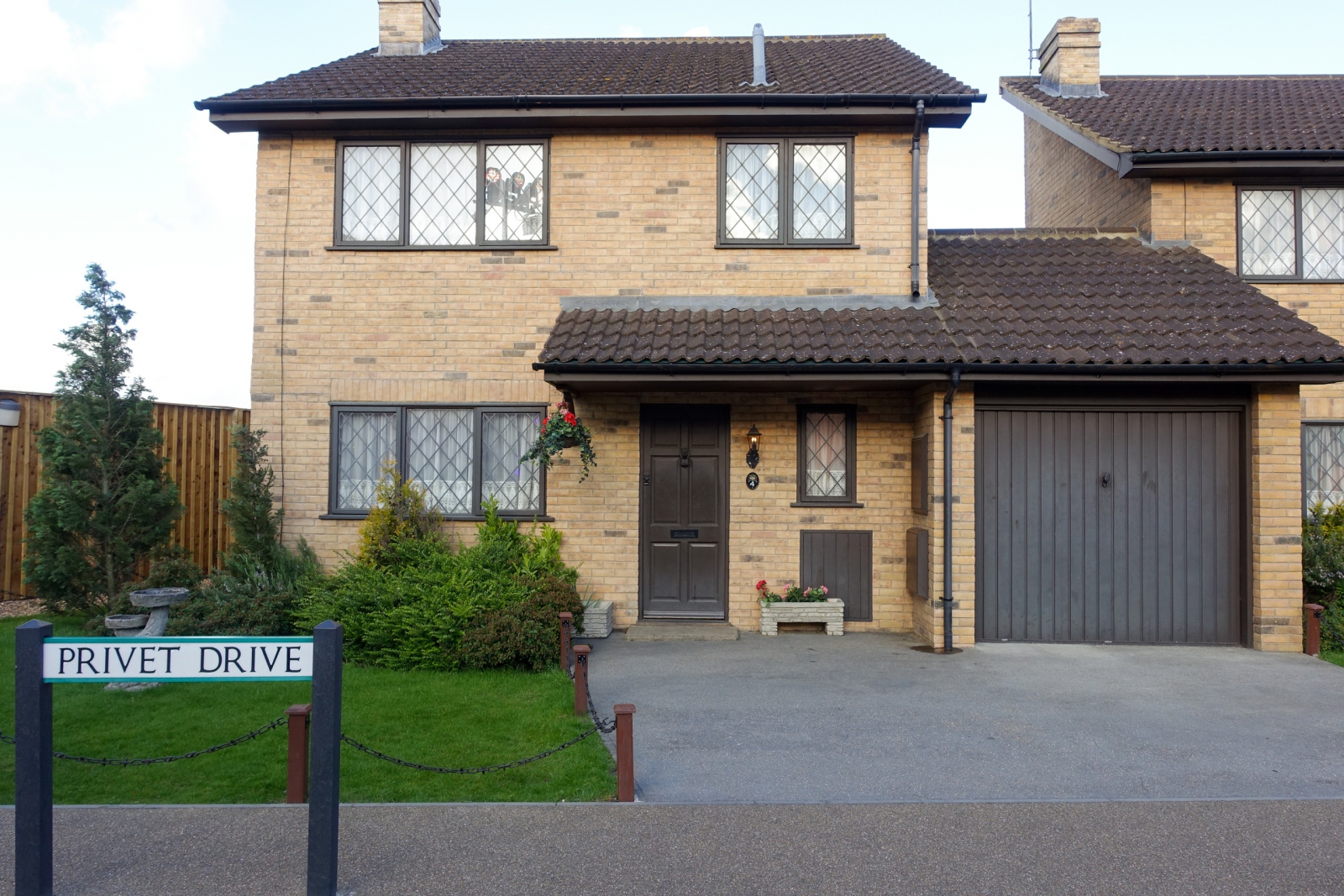 This was my favorite place in film Hogwarts, and I was so happy to see it here. It wasn’t in the original book or script, but Alfonso Cuarón added it to The Prisoner of Azkaban to make Harry and Hermione’s time-turner journey more exciting. This section was the only one that was physically built; the rest of the bridge was created with CGI. 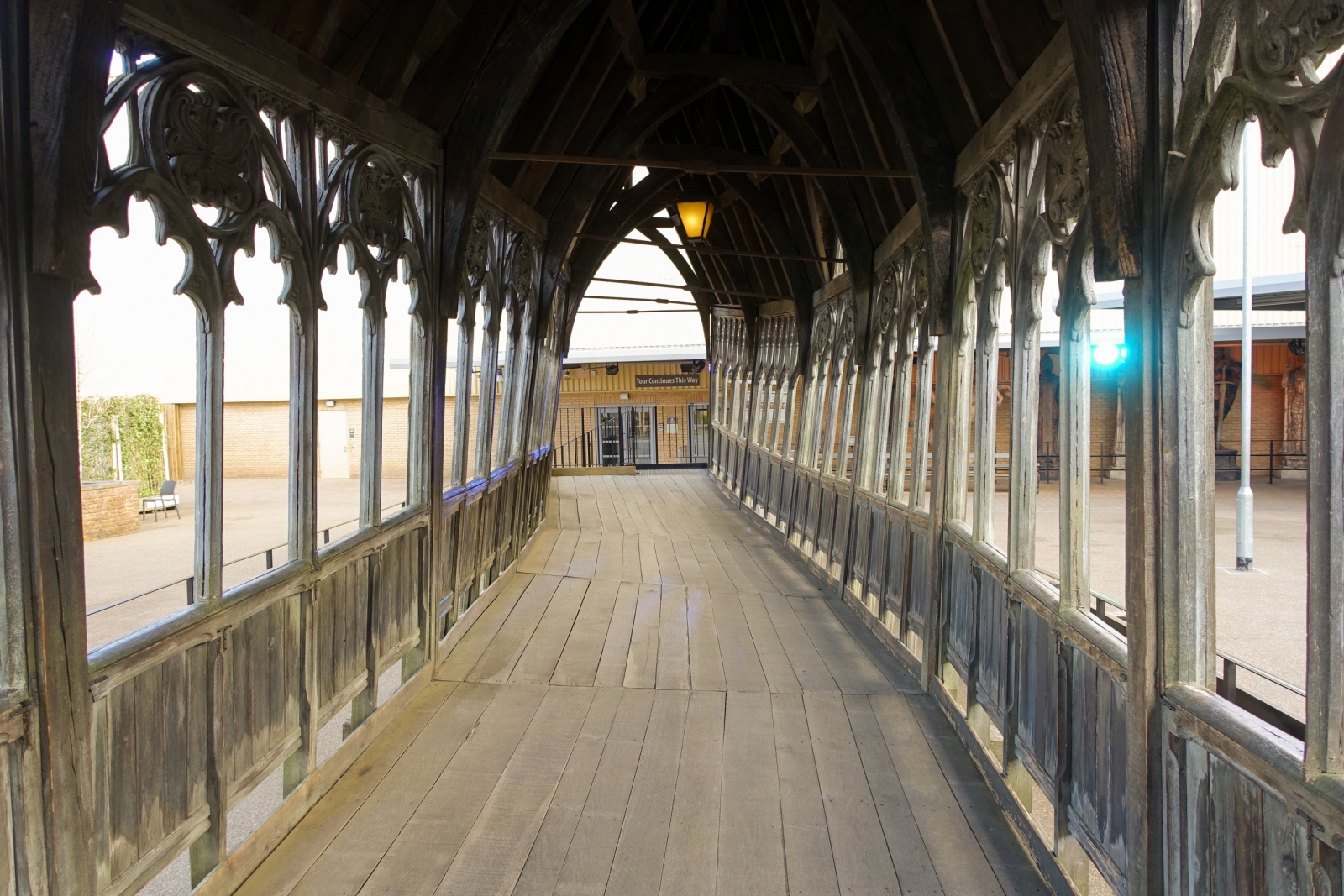 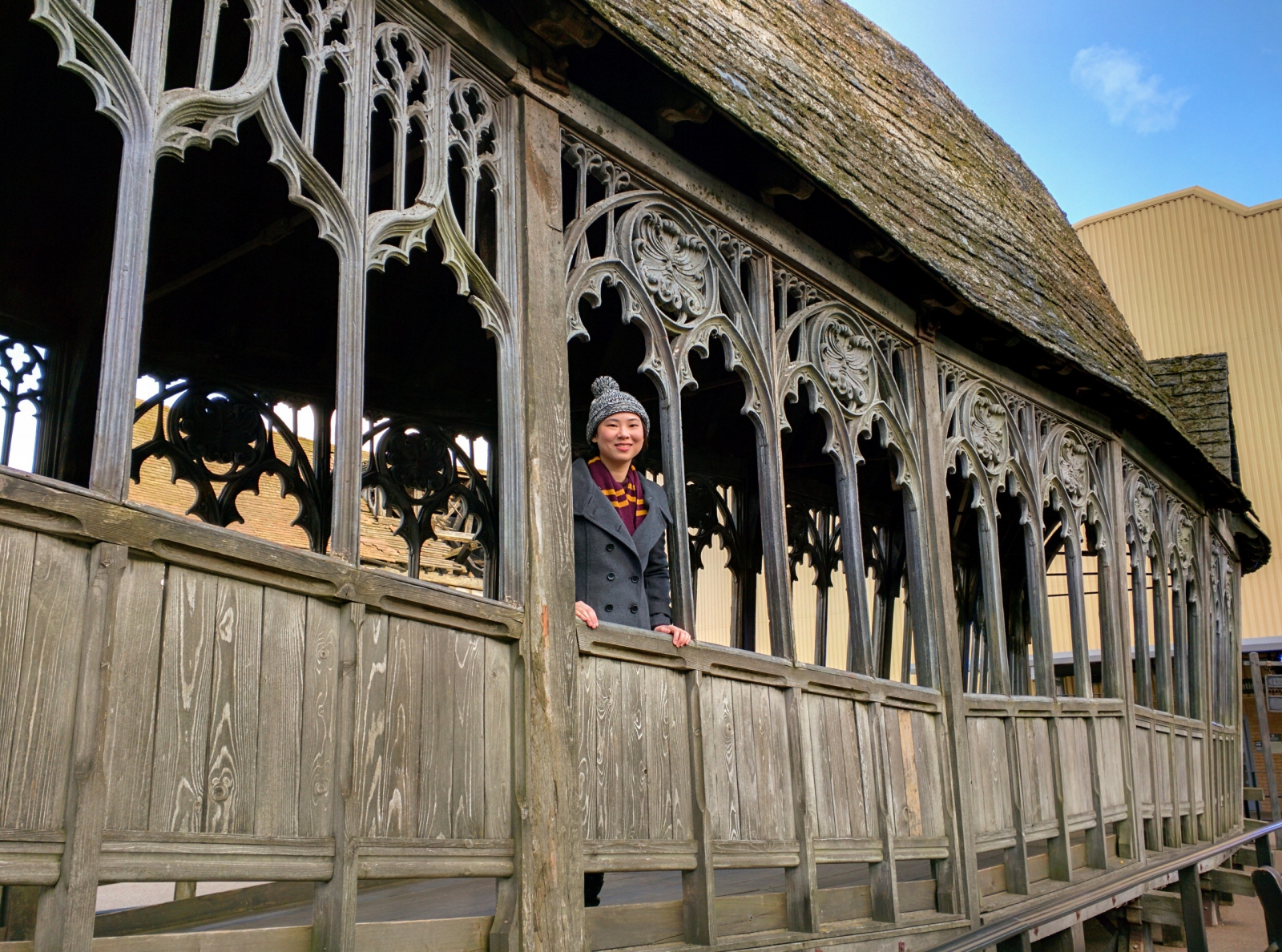 As we explored the backlot, one of the attendants told us that we should hurry—we had an hour before the last shuttle left, and we were only about three-fifths done.

We had to rush through the rest of the Studio Tour.

If we’d arrived on time and had an extra three hours, I have no doubt we would have stayed and enjoyed every minute. As it happens, we wasted those three hours picking up our lost luggage. Thanks, Virgin Atlantic.

After the first sound stage, I thought that was it for the sets—so I was surprised, and pleasantly so, to see the Diagon Alley set here. We saw the storefronts for Ollivanders, Flourish & Blotts, Madam Malkin’s, and more.

This exhibit showcased architectural drawings and concept art for the films. 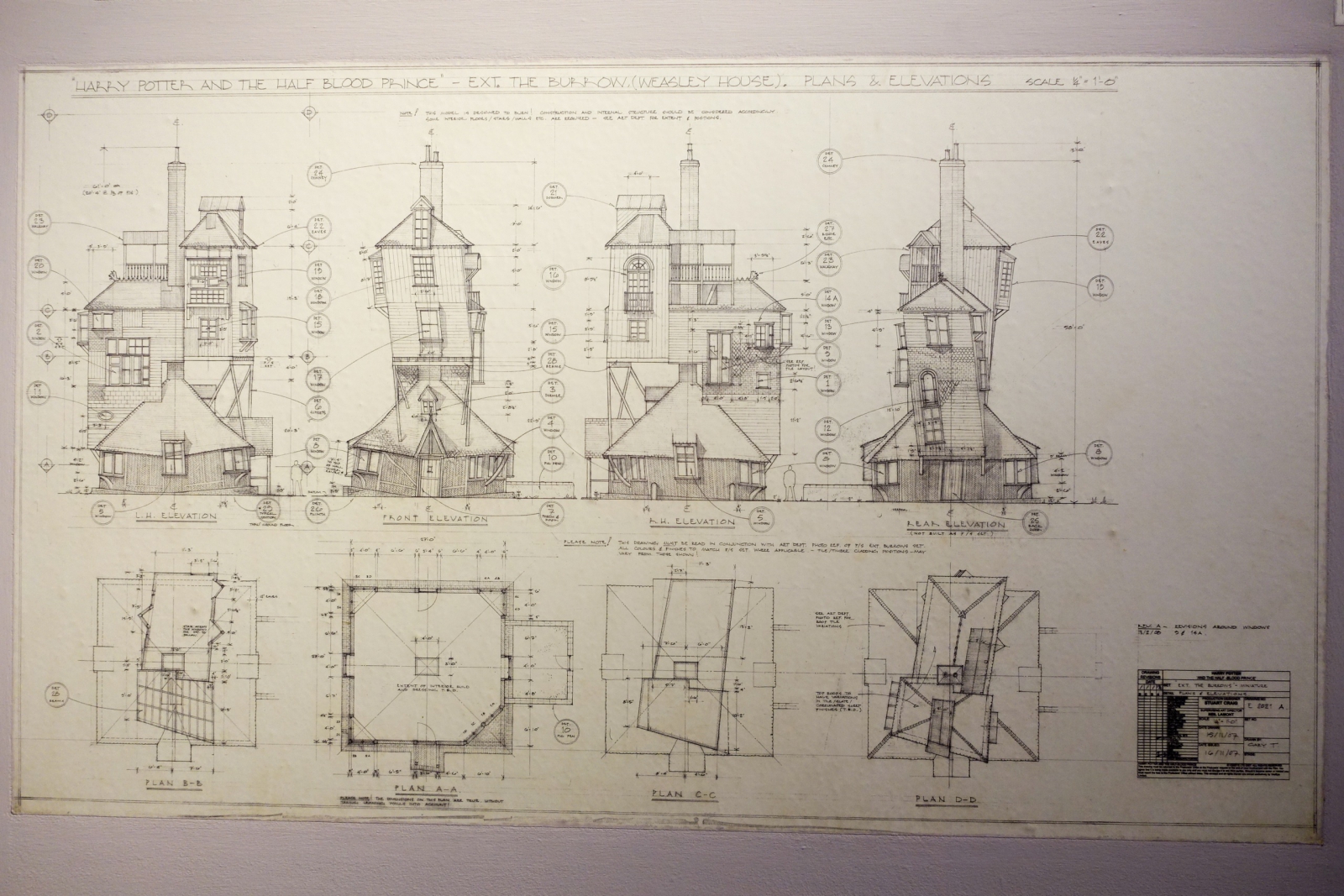 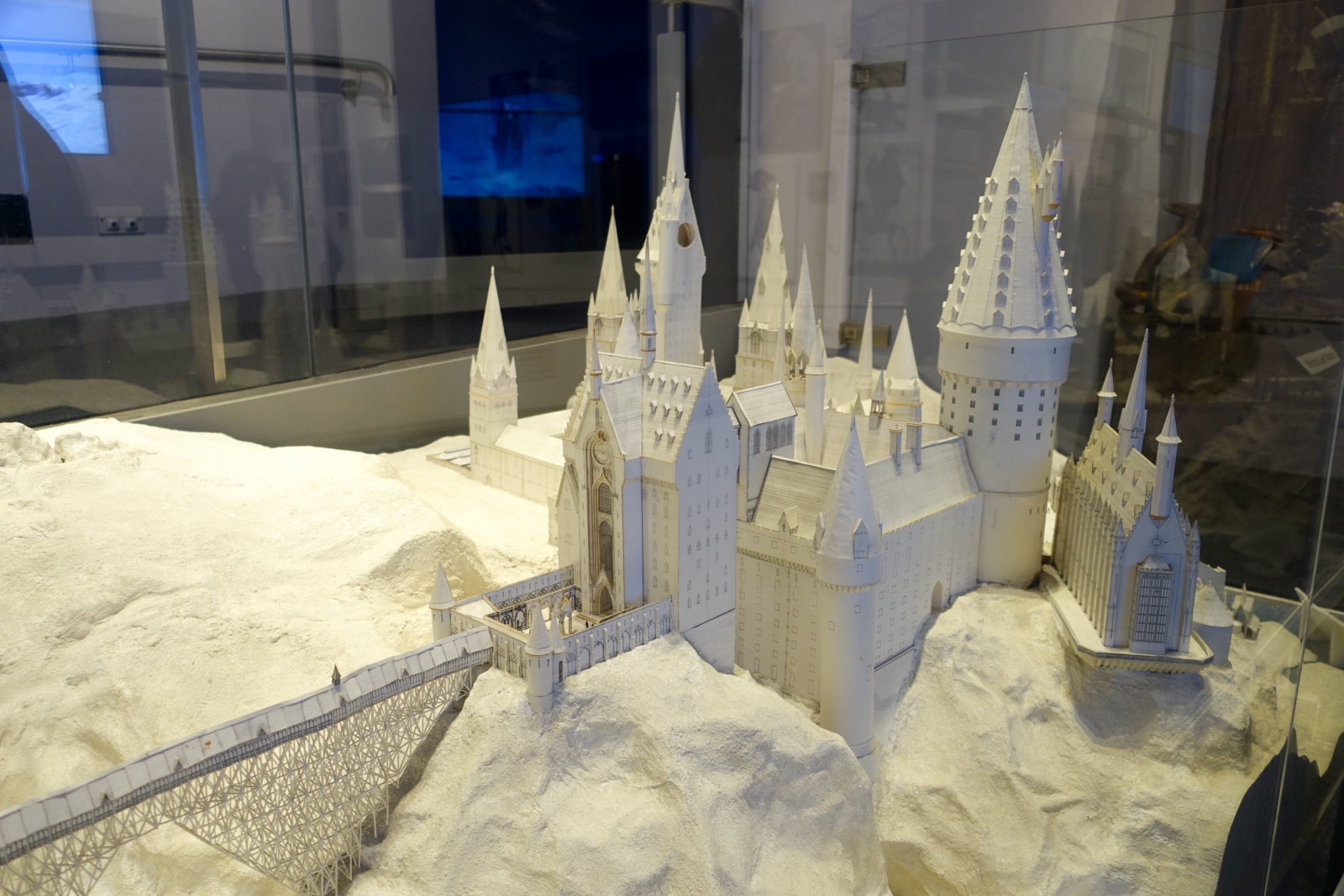 Appropriately placed near the end, it was the pièce de résistance of the Studio Tour. This massive 1:24 scale model of the Hogwarts castle was made for The Sorcerer’s Stone and used throughout the rest of the series. It was filmed and enhanced with digital effects. 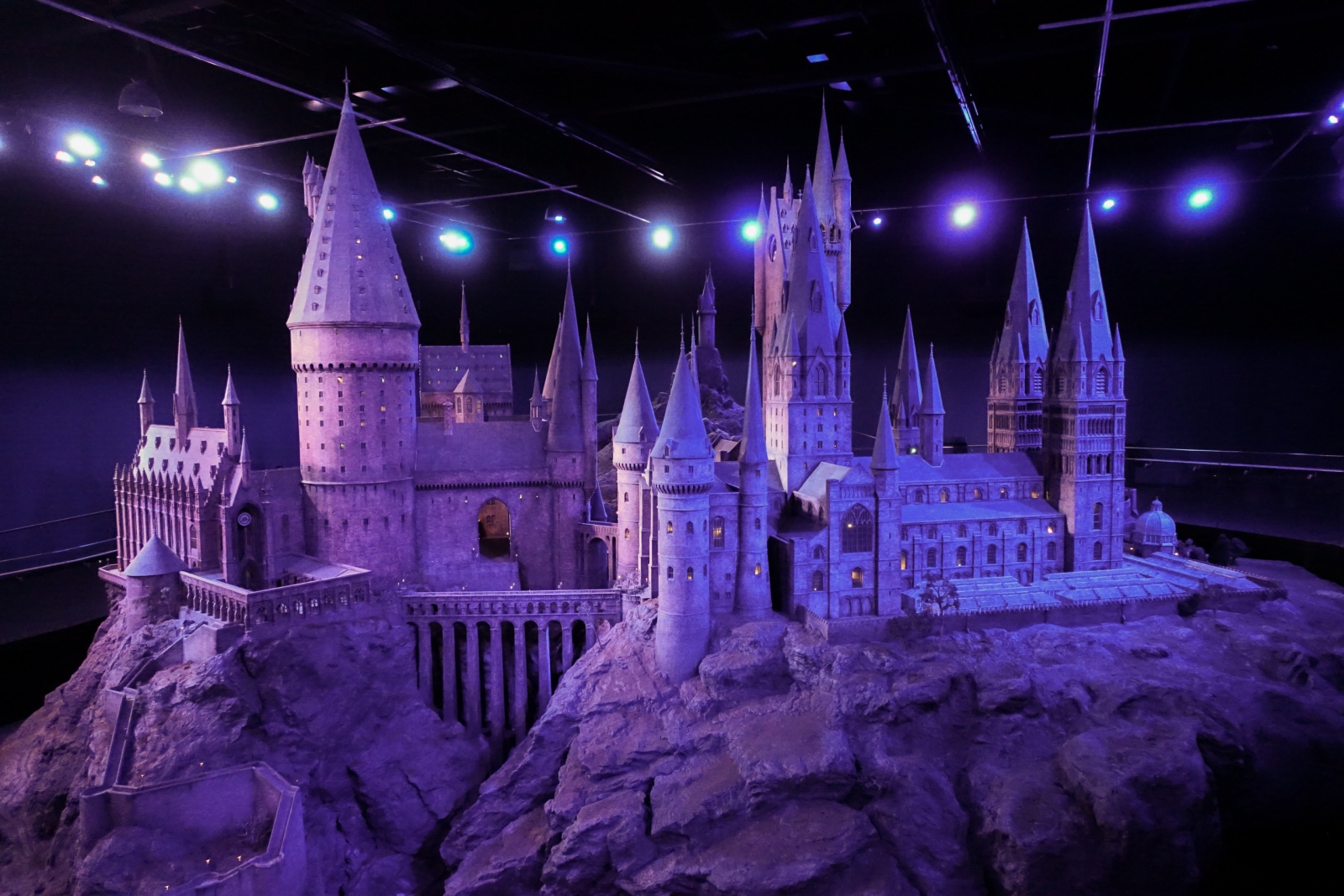 Every detail was sculpted by hand and made to scale. They used hundreds of fiber optic lights to simulate lanterns and torches, as well as real gravel for boulders and real plants for trees. The landscape was inspired by the Scottish Highlands.

I knew there would be a scale model, but I didn’t know it would be this large, this spectacular. This was the Hogwarts I knew and loved in all its glory. It was familiar and amazing all at once. 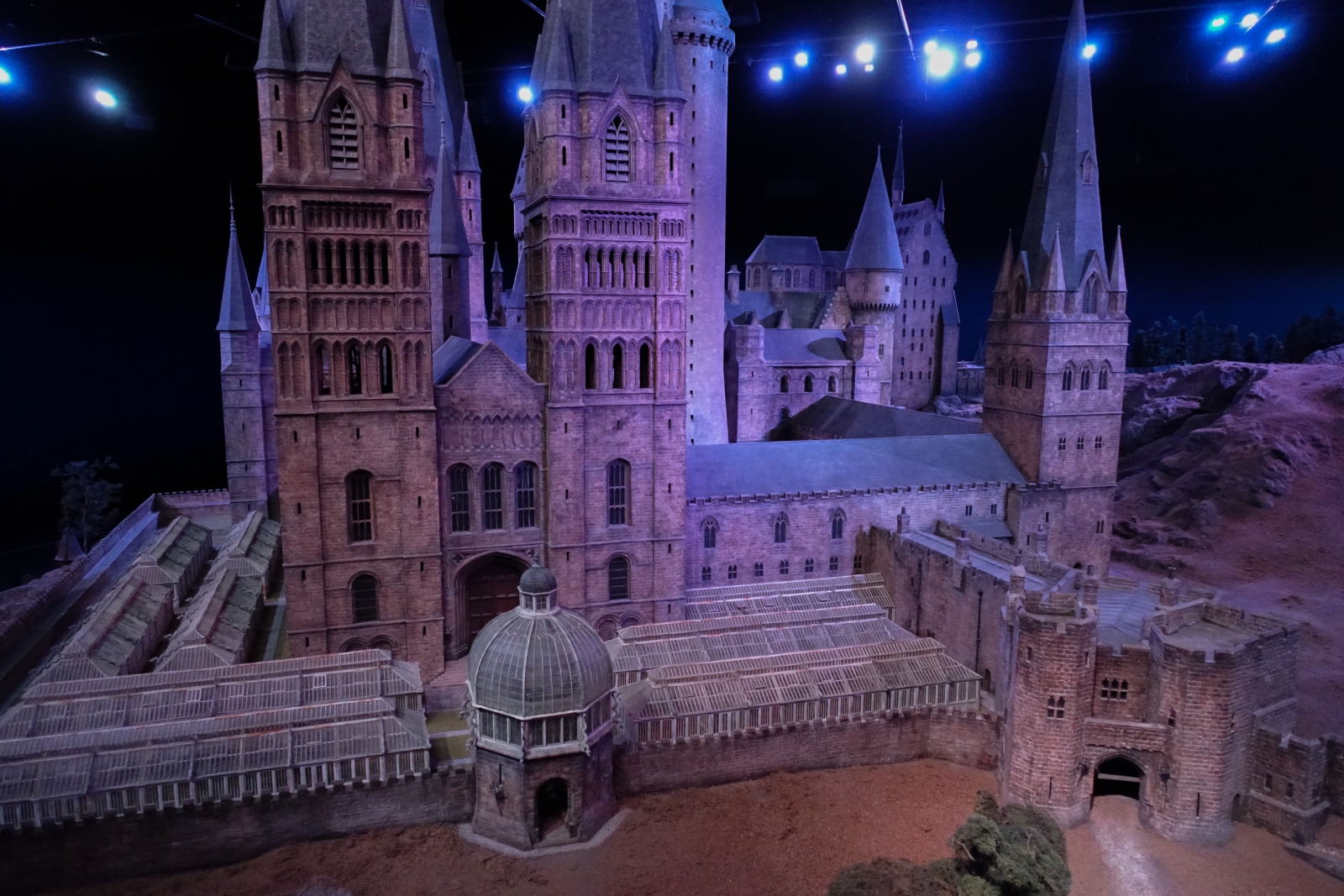 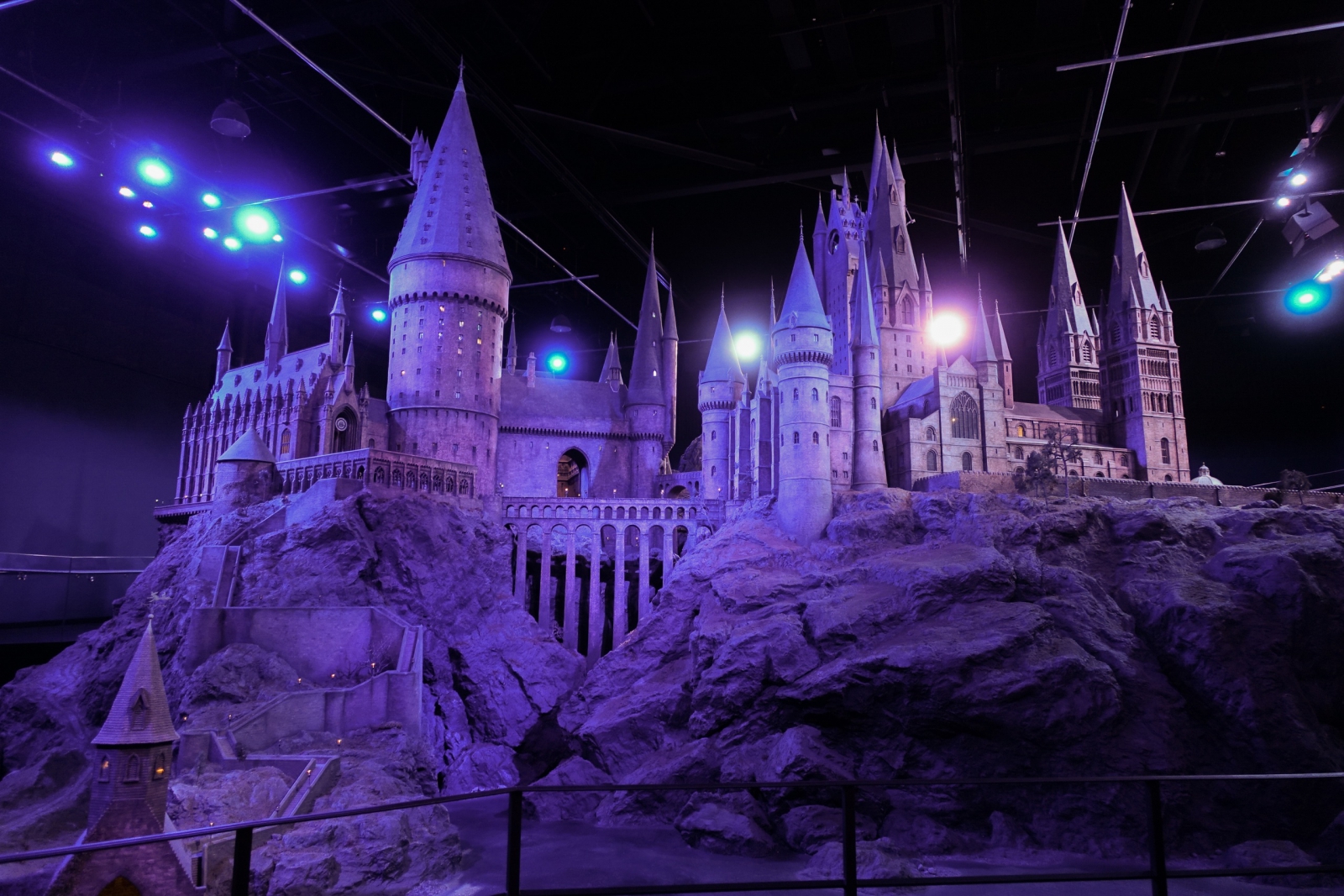 Why I Loved the Harry Potter Studio Tour

Five hours wasn’t nearly enough time for us to take in the Harry Potter Studio Tour. It was, hands down, our favorite place we visited while staying in London.

The Studio Tour is an organized, well thought-out experience with a wealth of fascinating sets and exhibits. It’s a fun place to visit not just for Harry Potter fans, but also for anyone with an interest in filmmaking, special effects, or set/costume/prop design.

That said, I have more personal reasons for loving my visit there:

It made me feel proud to be a Harry Potter fan.

An incredible amount of work went into this studio—eight films’ worth of sets, props, costumes, paintings, drawings, and sculptures—all made by people who lived and breathed Harry Potter.

They could have done half of this work with CGI, but it wouldn’t have been the same. From the colossal Hogwarts scale model to the tiny bottles in Dumbledore’s memory cabinet, they literally built the world of Harry Potter. I saw the care that went into the work. The attention to detail that made it extraordinary.

The people behind the film series did well by their fans. They gave it the thought and effort that it deserved. So I’m happy to call myself a fan of Harry Potter. And I view the films now not just with enthusiasm, but also with great respect.

It made the world of Harry Potter come to life.

One of the reasons why I love to travel is because it’s imagination come to life. You imagine a faraway place—a place that, for you, only exists in your head. Then you do some research, save money, make plans, and take the trip. Suddenly you’re there, and the place is real.

This was how I felt about the Studio Tour.

Up until my visit, the world of Harry Potter existed only in books, in films, and in my imagination.

I remember my 14-year-old self, marveling at The Sorcerer’s Stone in the dark theater of a castle-shaped mall in Manila. If you had told her she would one day see the actual castle they used in the films, she wouldn’t have believed you.

But here I was.

When I stepped into the Great Hall, for the briefest moment, I felt like I was in a story of my own.

I was in England on a trip I’d wanted to do all my life. And if I’d made it here, if I’d actually made it here, what could possibly happen next?

And my heart swelled with something—a kind of hope or excitement. A glimmer of everything yet to come.

It’s hard to describe in words. But you know what? It felt almost like magic. 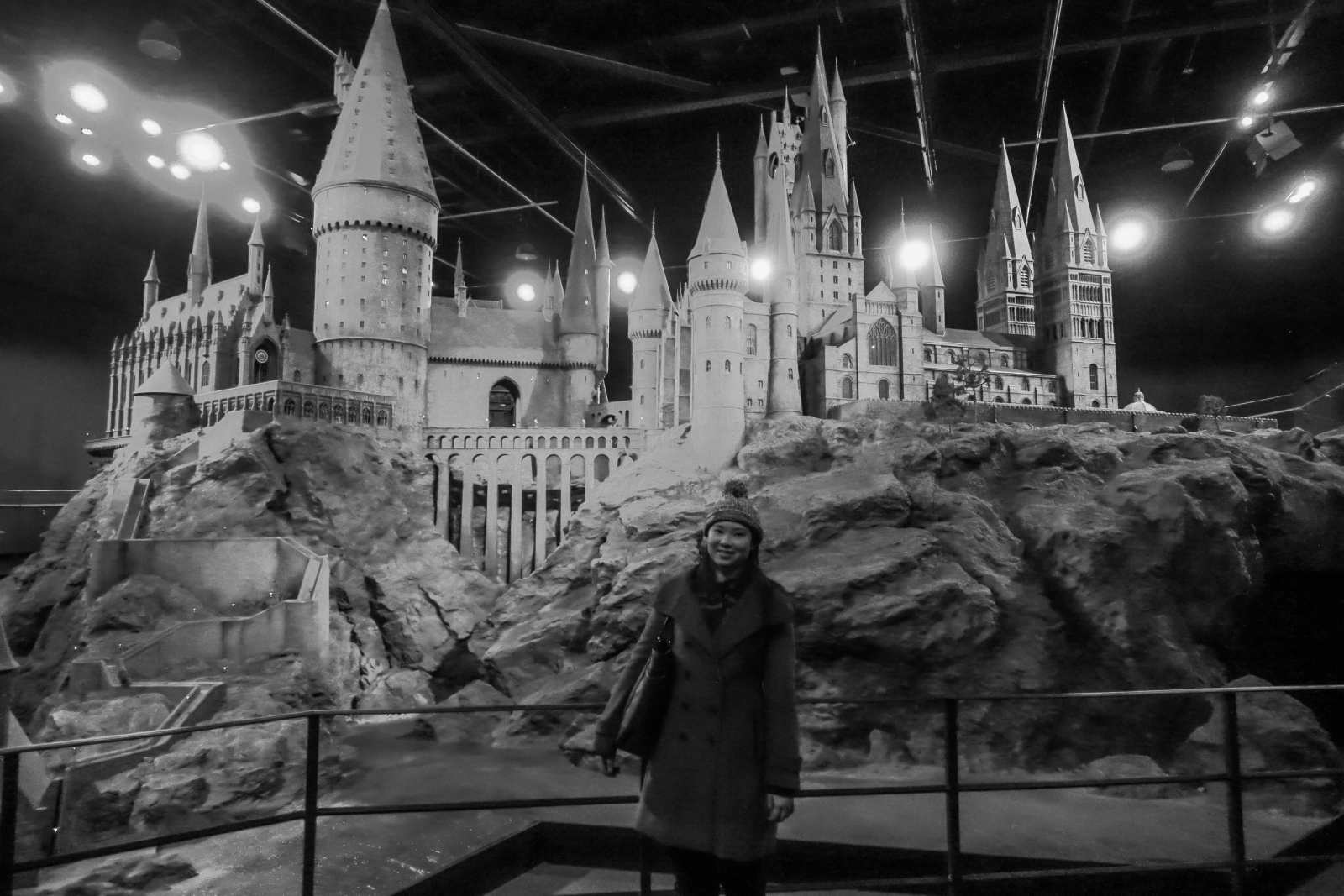 Reservations required. Do it as soon as your trip is booked.

Visit in any weather. Only the backlot is outdoors.

Timed entry. The more you like Harry Potter, the earlier in the day you should schedule your time slot. Once you’re inside, you’re free to go at your own pace until closing time.

Tip: If you sit at the front of the theater, you’ll be one of the first to enter the Great Hall.

Getting there: From London, take the National Rail train to Watford Junction, then take the Warner Bros. Shuttle to the Studio Tour. The entire trip takes about an hour if you take the express train. You could also drive, which takes 1 to 2 hours.