A Day Trip to Bath

We left the apartment at a leisurely 11:00 AM. With a bag of almond croissants in hand for breakfast, we took the subway to Paddington station. Then we bought tickets for the National Rail and took a packed train to Bath. The ride was an hour and a half long.

The City of Bath

The city of Bath was founded by Romans as a sanctuary of healing and relaxation. They developed the city around its three natural hot springs. They built a reservoir, a series of baths, and a temple dedicated to the goddess Sulis Minerva. The city, which was then called Aquae Sulis (the waters of Sulis), drew visitors from all around Europe.

Bath has been known throughout history as a spa town. Today, the hot springs continue to supply the Roman Baths and Thermae Bath Spa.

After lunch at an Italian restaurant and a walk through a crowded street that looked like a strip mall, we arrived at the Roman Baths museum.

The lines were long but went quickly. There were plenty of visitors, as you would expect at one of the most popular heritage sites in the UK.

We thoroughly enjoyed ourselves at this museum. We took our time, walked through all the rooms, looked at hundreds of artifacts, and listened to about 70% of the excellent audio guide.

Here’s what you can see and do in the Roman Baths museum:

This is the museum’s centerpiece: a large pool filled with hot spa water with steps leading down on all sides. In the past, the niches around it would have held benches and small tables for bathers. 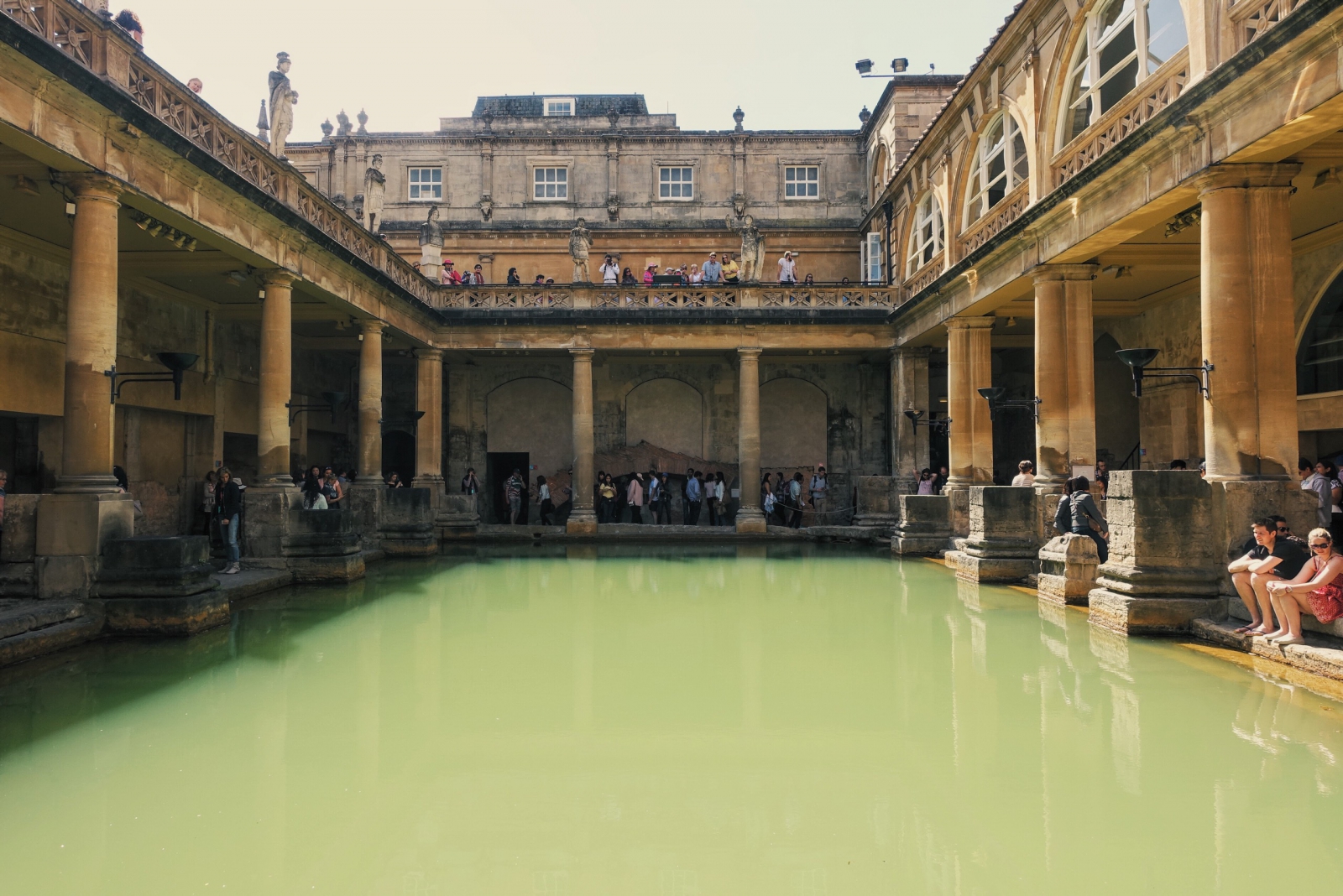 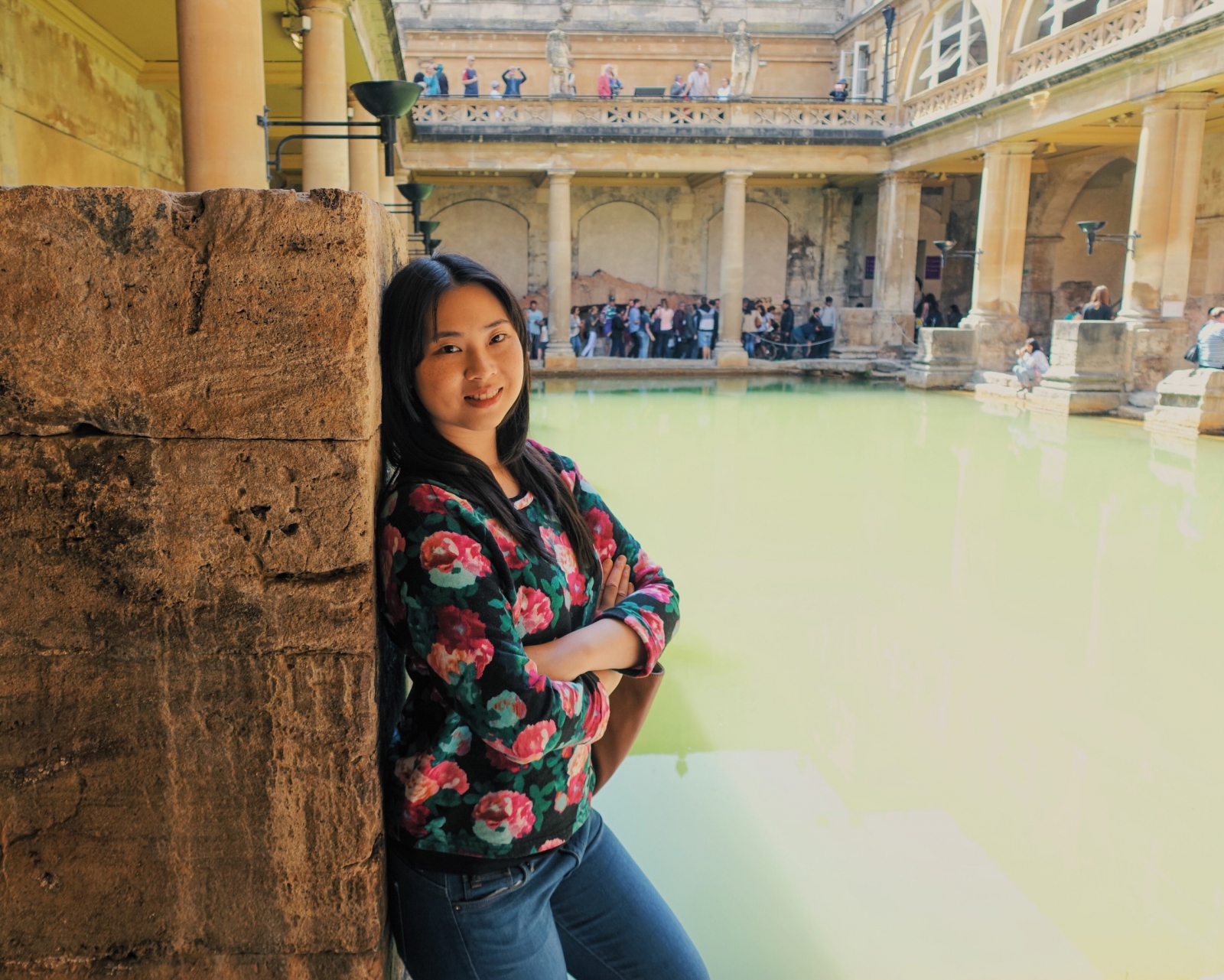 240,000 gallons of natural mineral-rich hot water rises here every day, as it has for thousands of years. 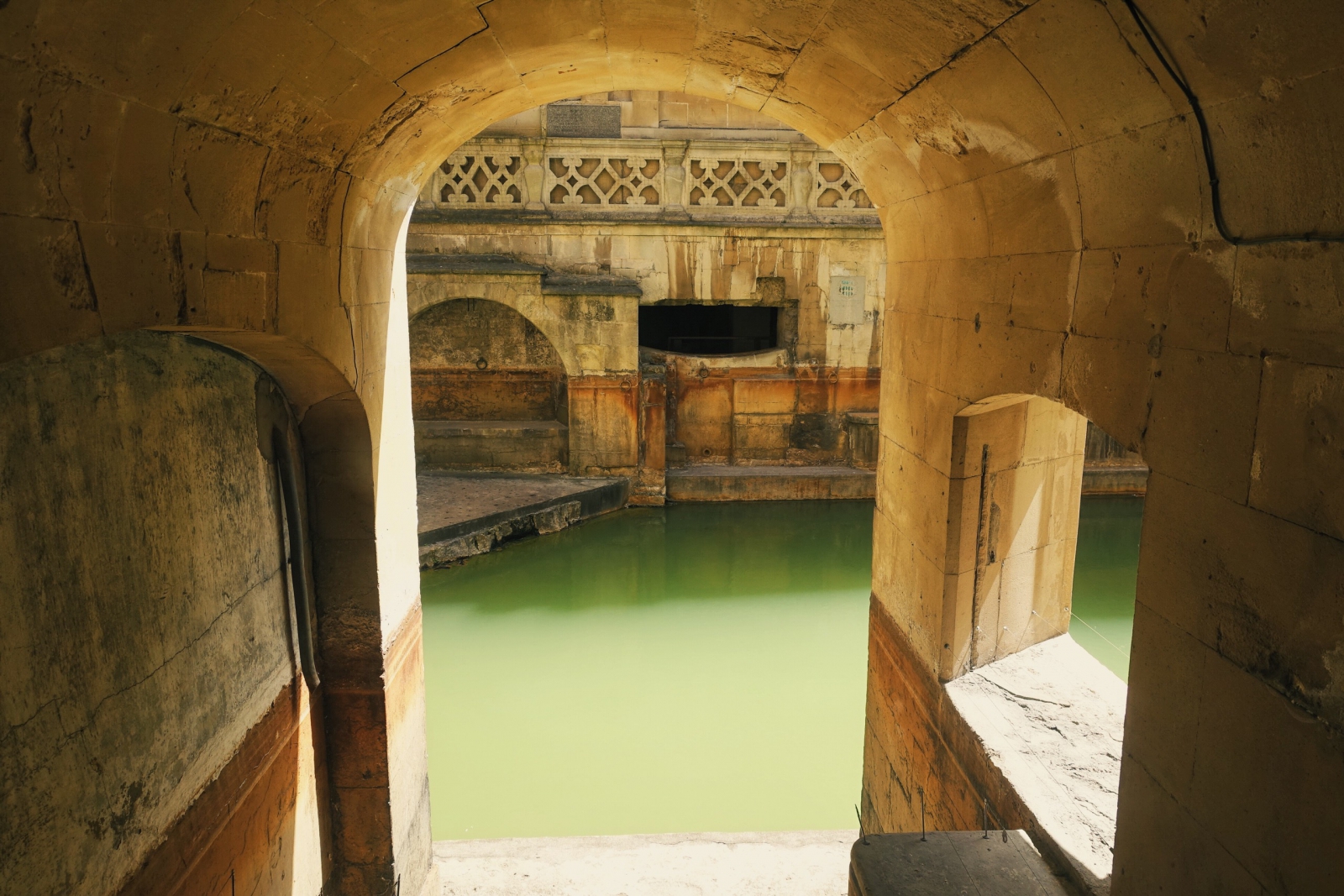 Through a glass floor in the museum, you can observe how the spring overflow carries extra water to the Roman drain, which then takes the water to the River Avon.

The ancient plumbing is still mostly in place today. They used lead pipes and gravity flow to move hot water around the site. 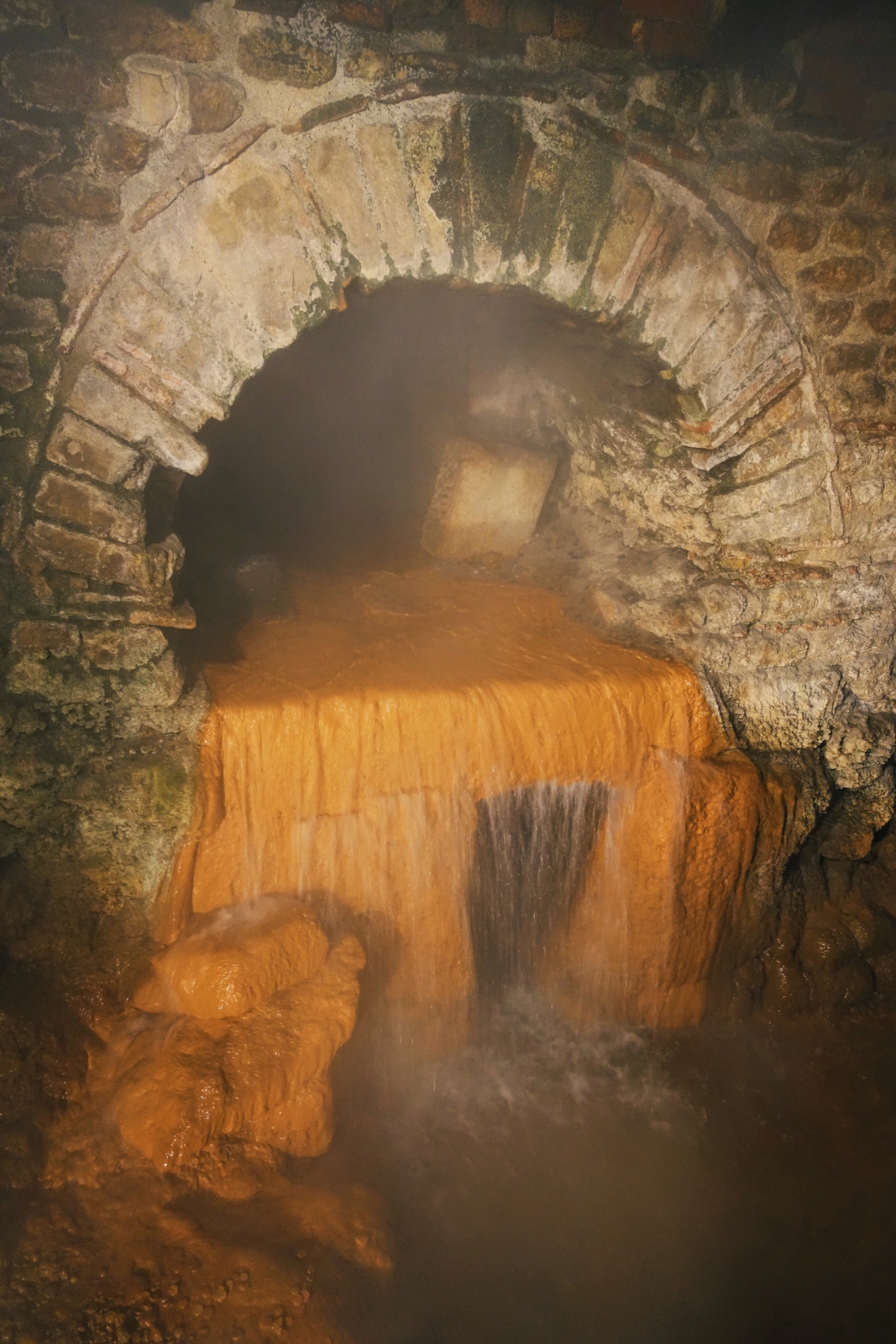 See the surviving ruins of the bathing pools and heated rooms of the Roman Baths.

Walk around the terrace overlooking the Great Bath. Statues of Roman emperors and British governors line this area. 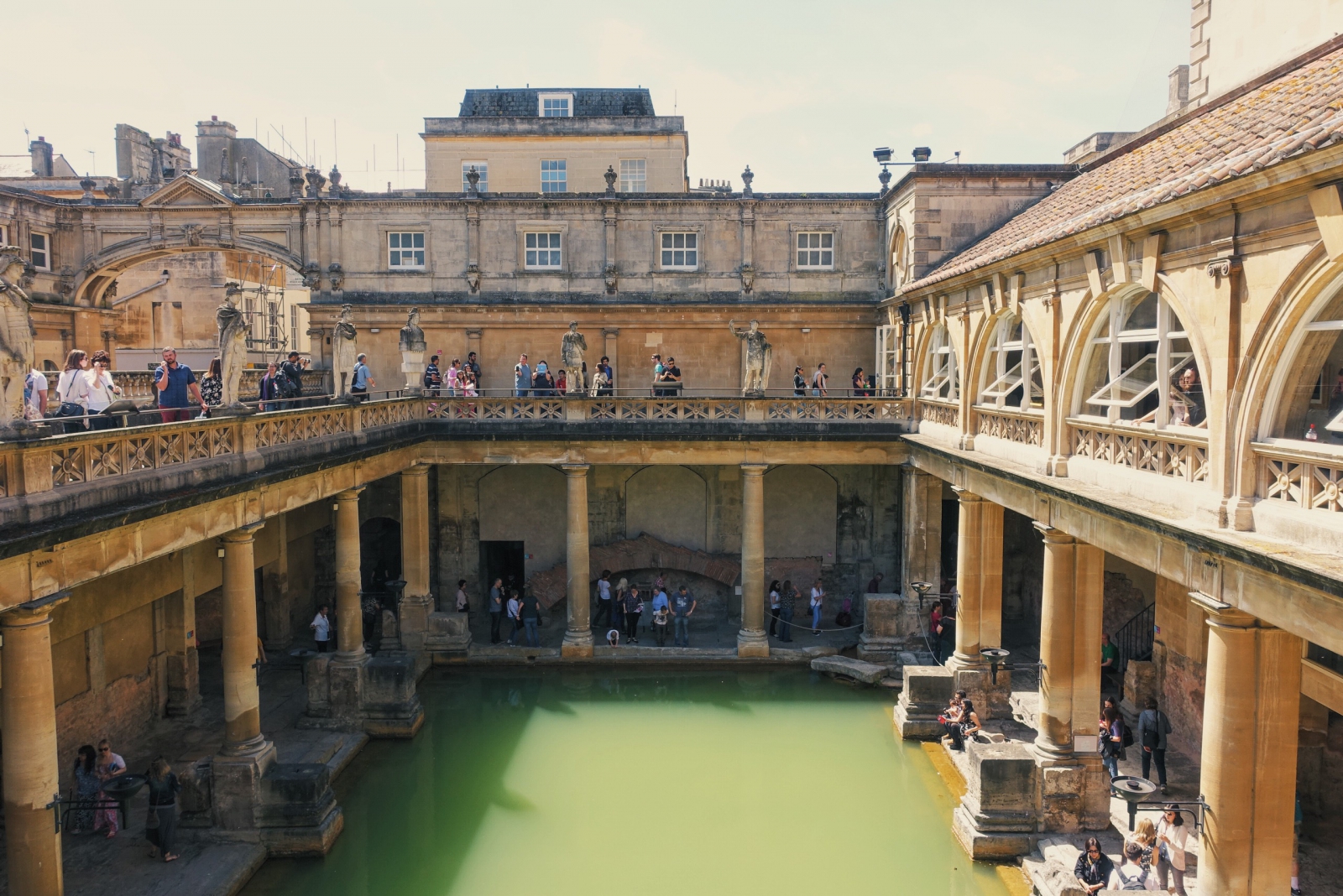 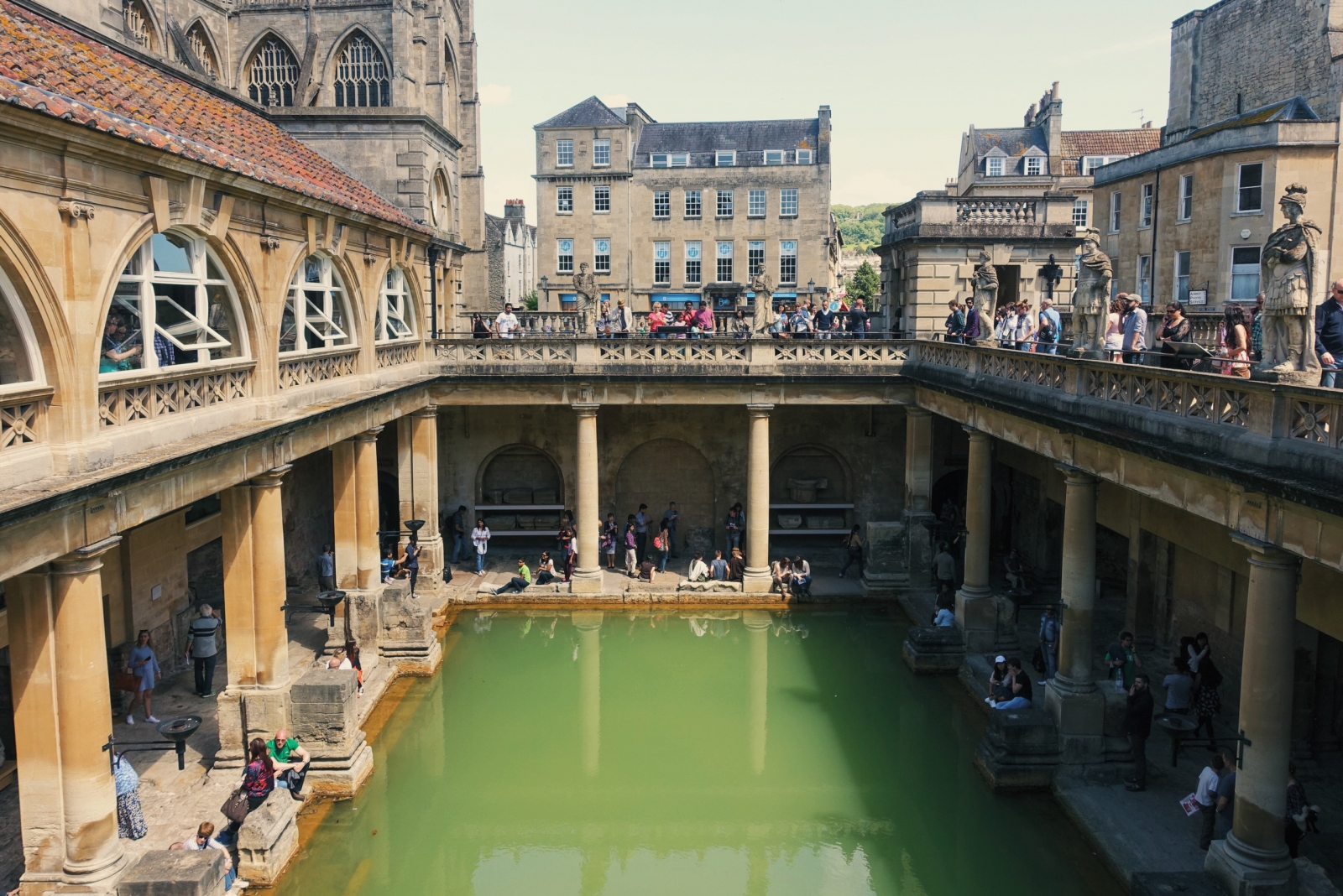 The museum showcases the surviving parts of the temple’s ornamental stone pediment (i.e. the triangular upper part of the front of a classical building). 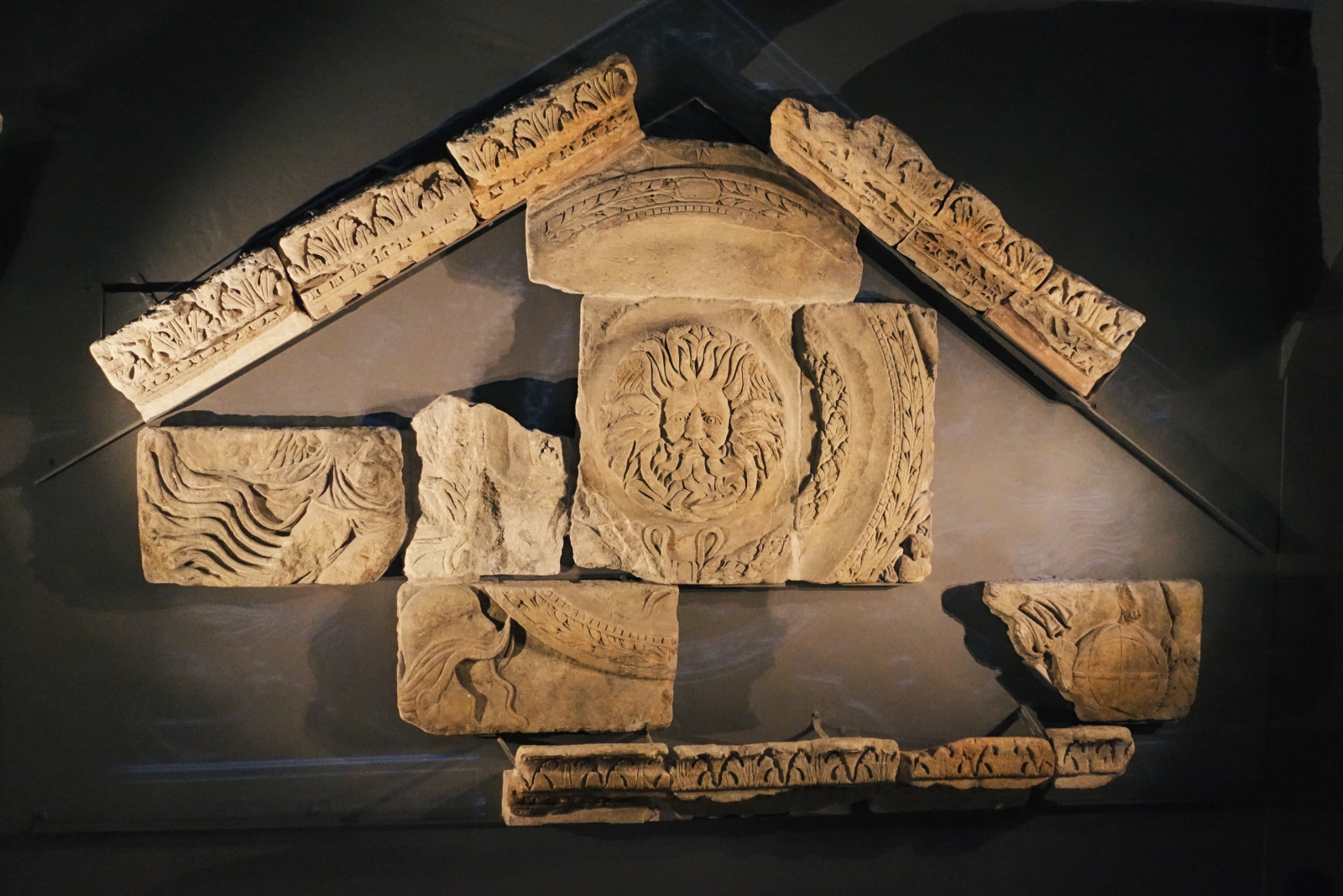 Go down the suspended walkway above what was once the temple courtyard. This was where worshippers prayed to Sulis Minerva and made sacrifices at the great altar. There are also films here showing digital reconstructions of what the temple courtyard looked like in Roman times.

Thousands of objects found in the site tell stories about the people who lived in and visited Aquae Sulis.

What I found especially intriguing were the “curses”—messages etched on lead or pewter sheets, which they rolled up and cast into the spring. They believed that the spirit of the goddess lived in the water—which makes these inscriptions Britain’s earliest prayers.

Examine two models of the temple and baths as they looked in Roman times.

Watch film projections portraying the lives of the people in Aquae Sulis.

After our visit to the Roman Baths museum, we took a walk around town. 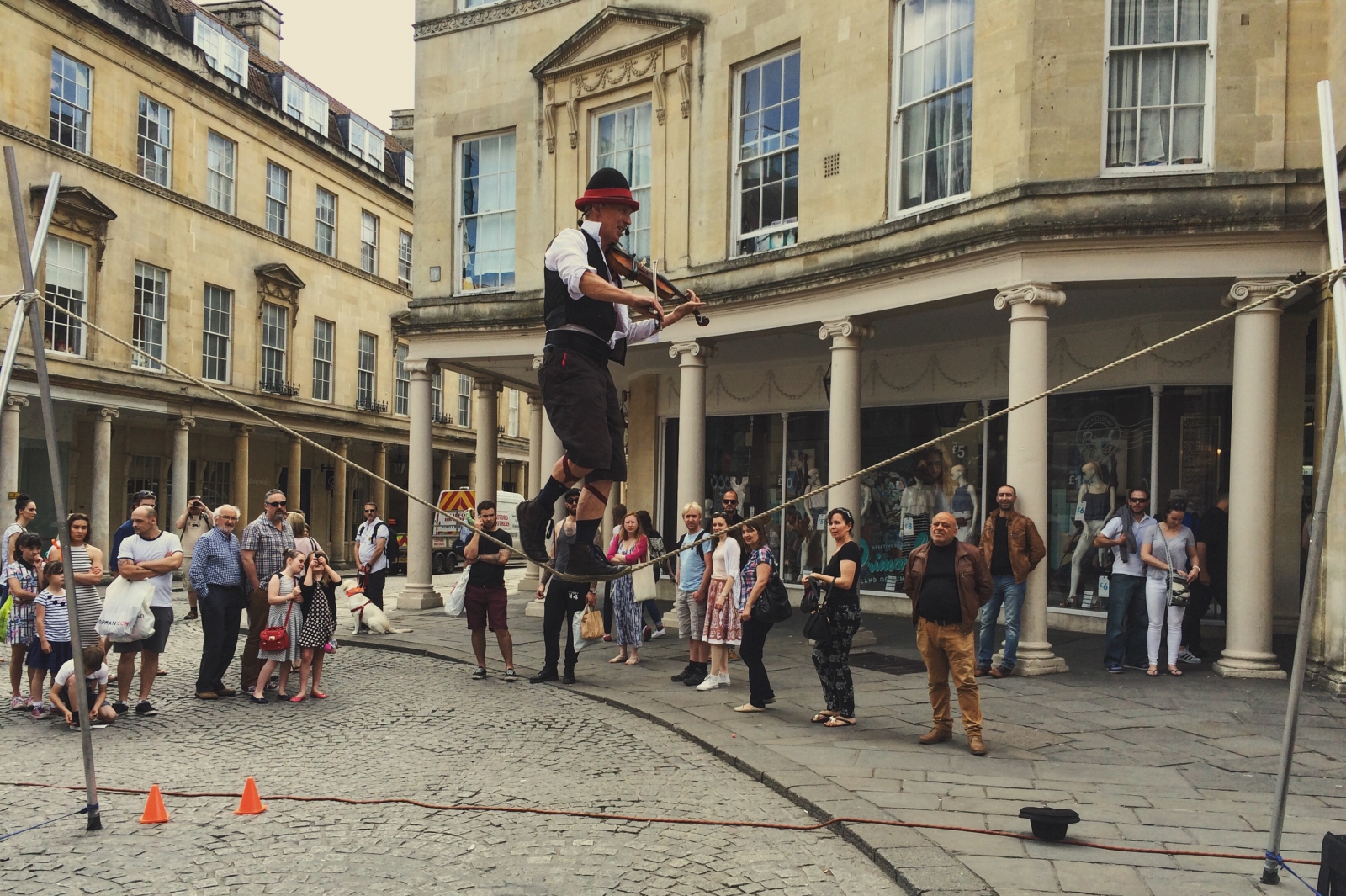 We visited Pulteney Bridge, an 18th-century bridge across the River Avon. It’s one of a few historic bridges in the world lined with built-in shops. 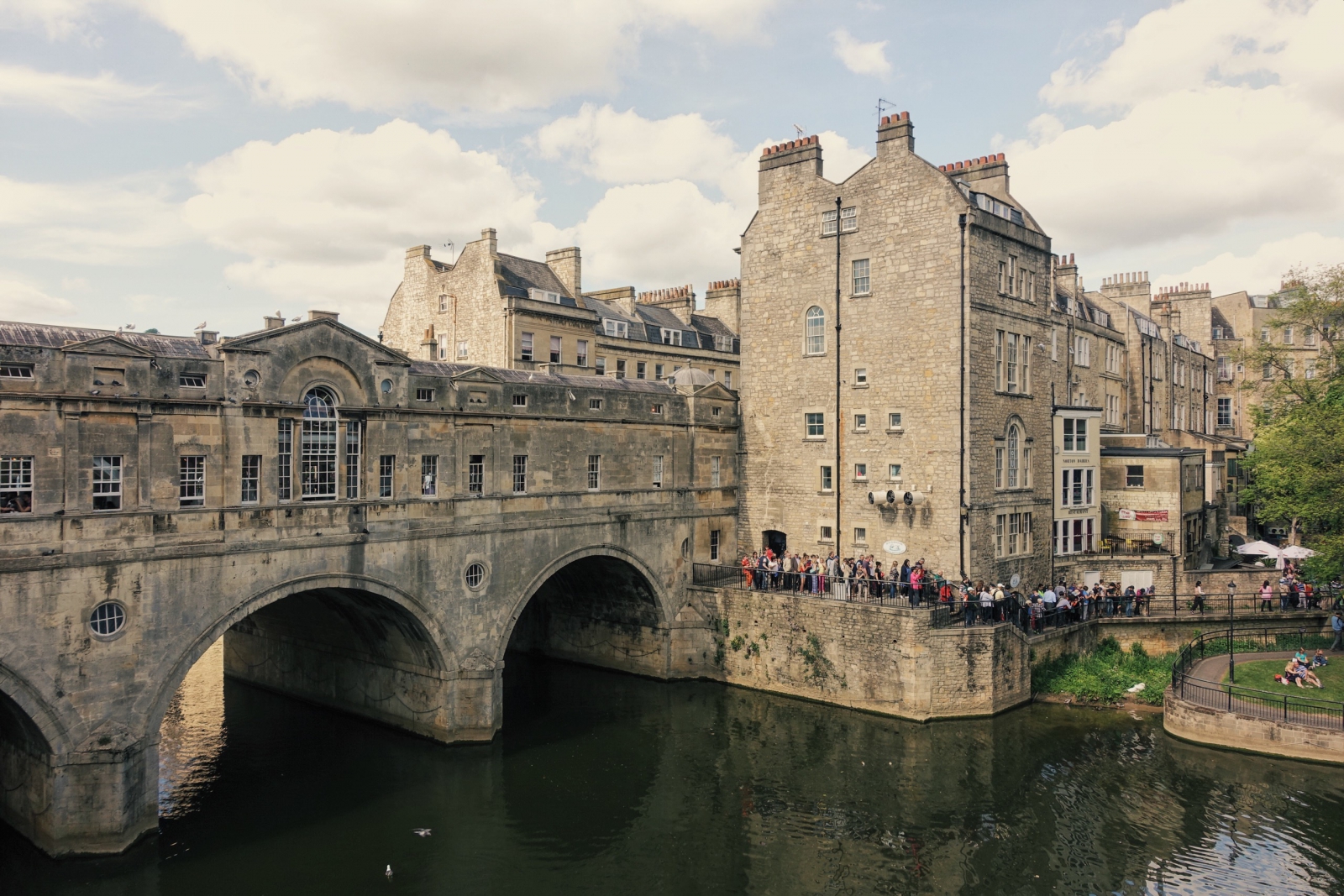 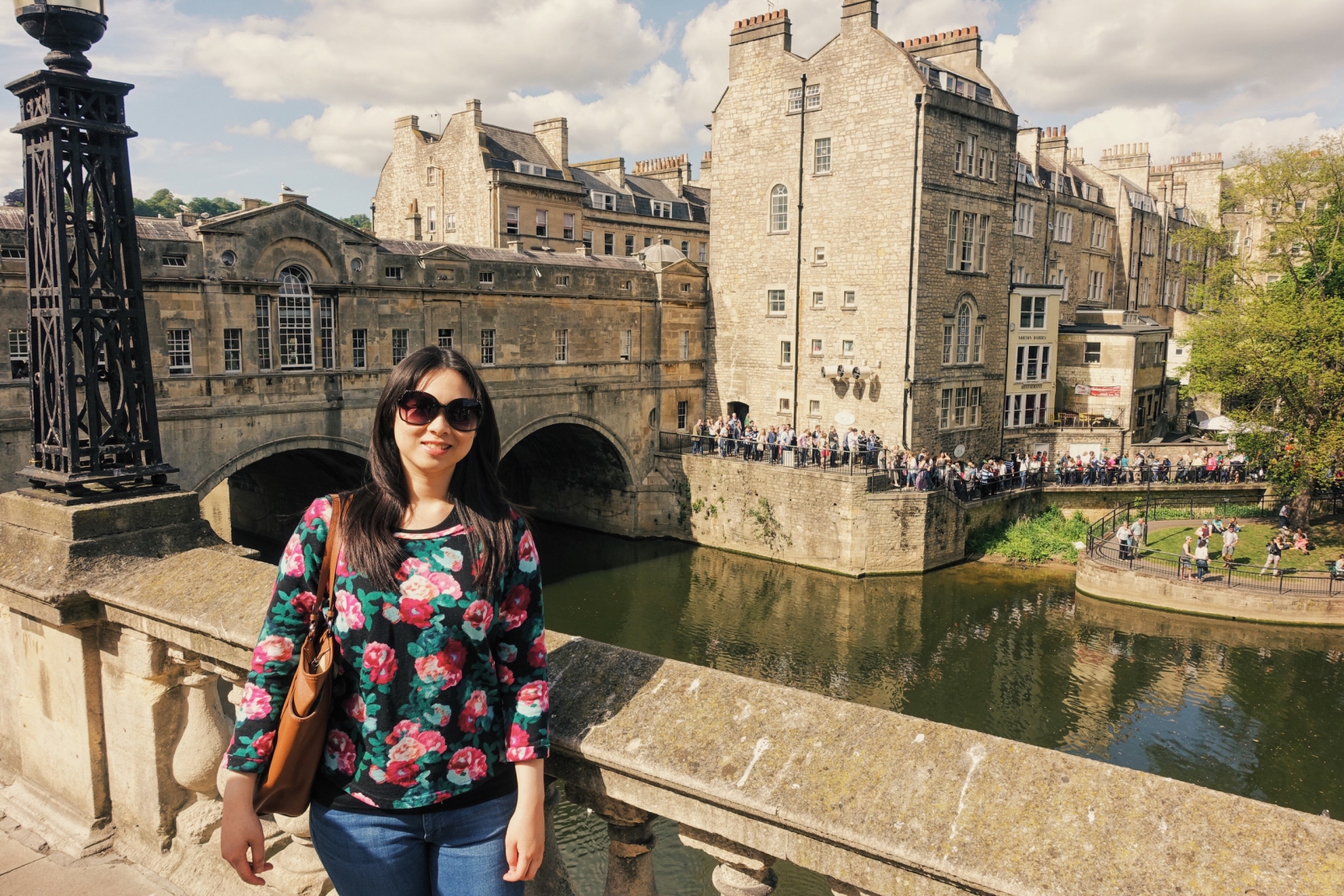 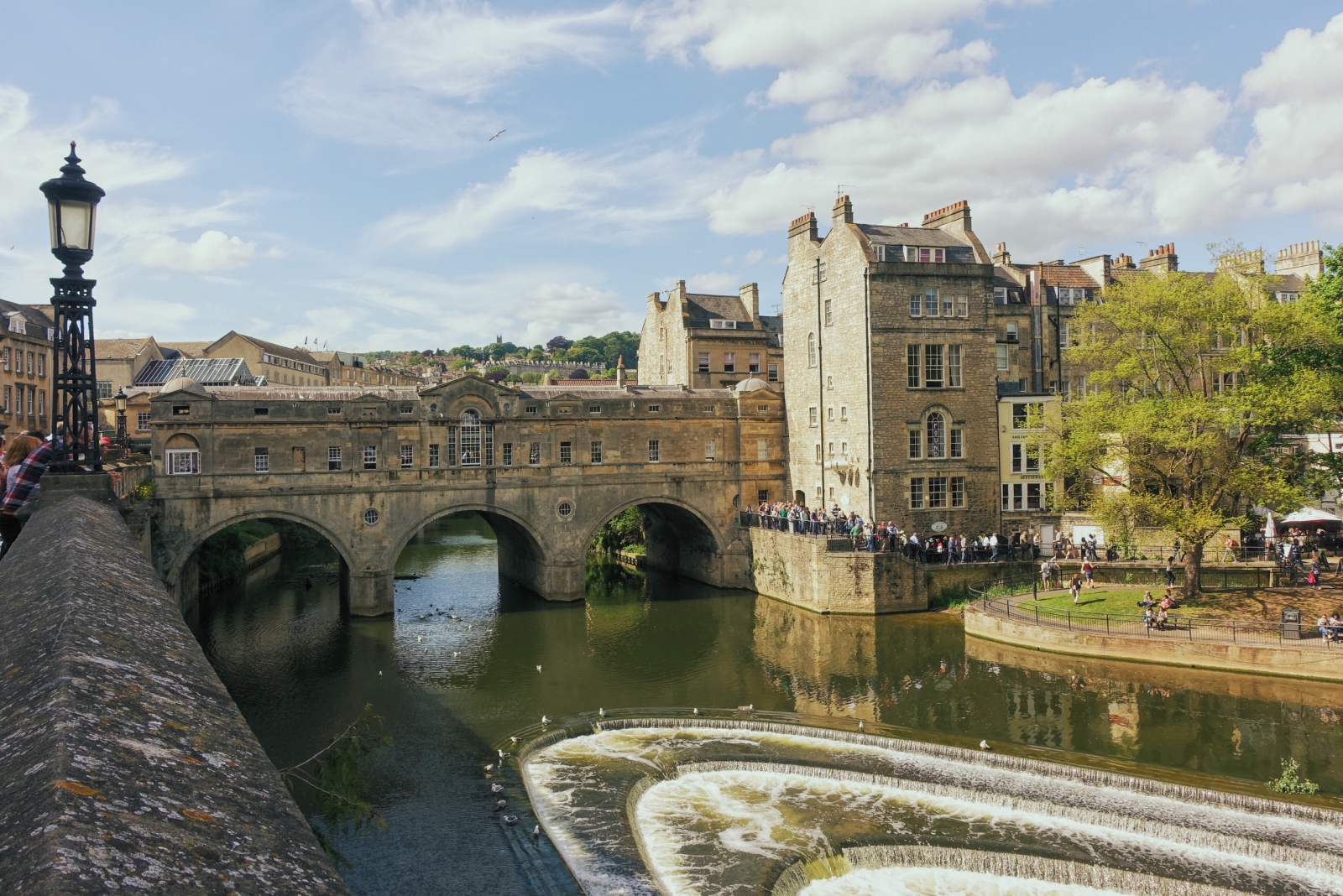 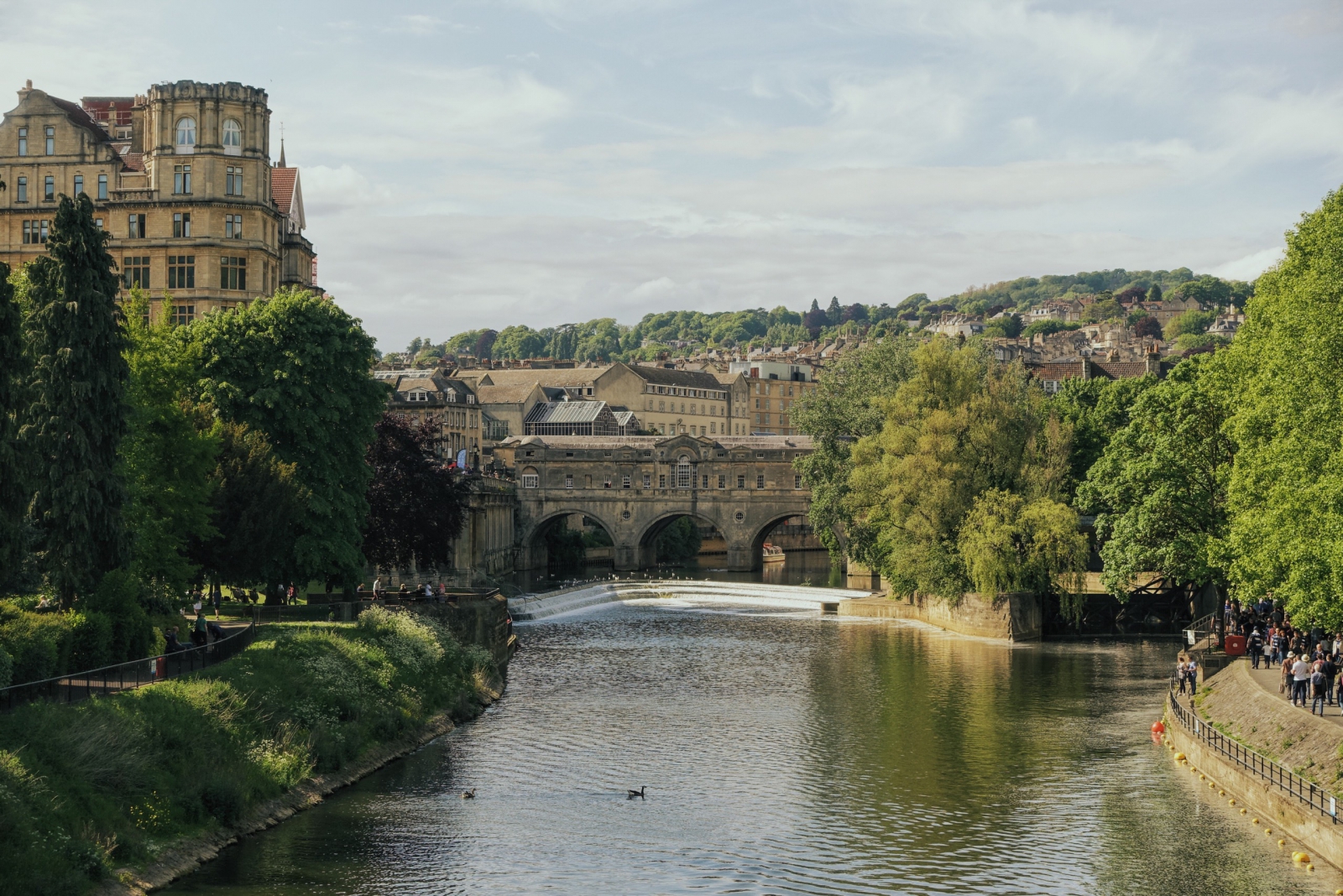 This is one of Bath’s most impressive landmarks: a group of 30 terrace houses forming the shape of a crescent. It’s an excellent example of Georgian architecture in the UK. Today, the Royal Crescent contains a luxury hotel, a museum, and private housing.

We admired the Royal Crescent from Royal Victoria Park. Compared with the other parts of Bath we’d visited, it was quiet and spacious here. We sat on a park bench for a while, watching people as they lounged, picnicked, and played with soccer balls on the grass. 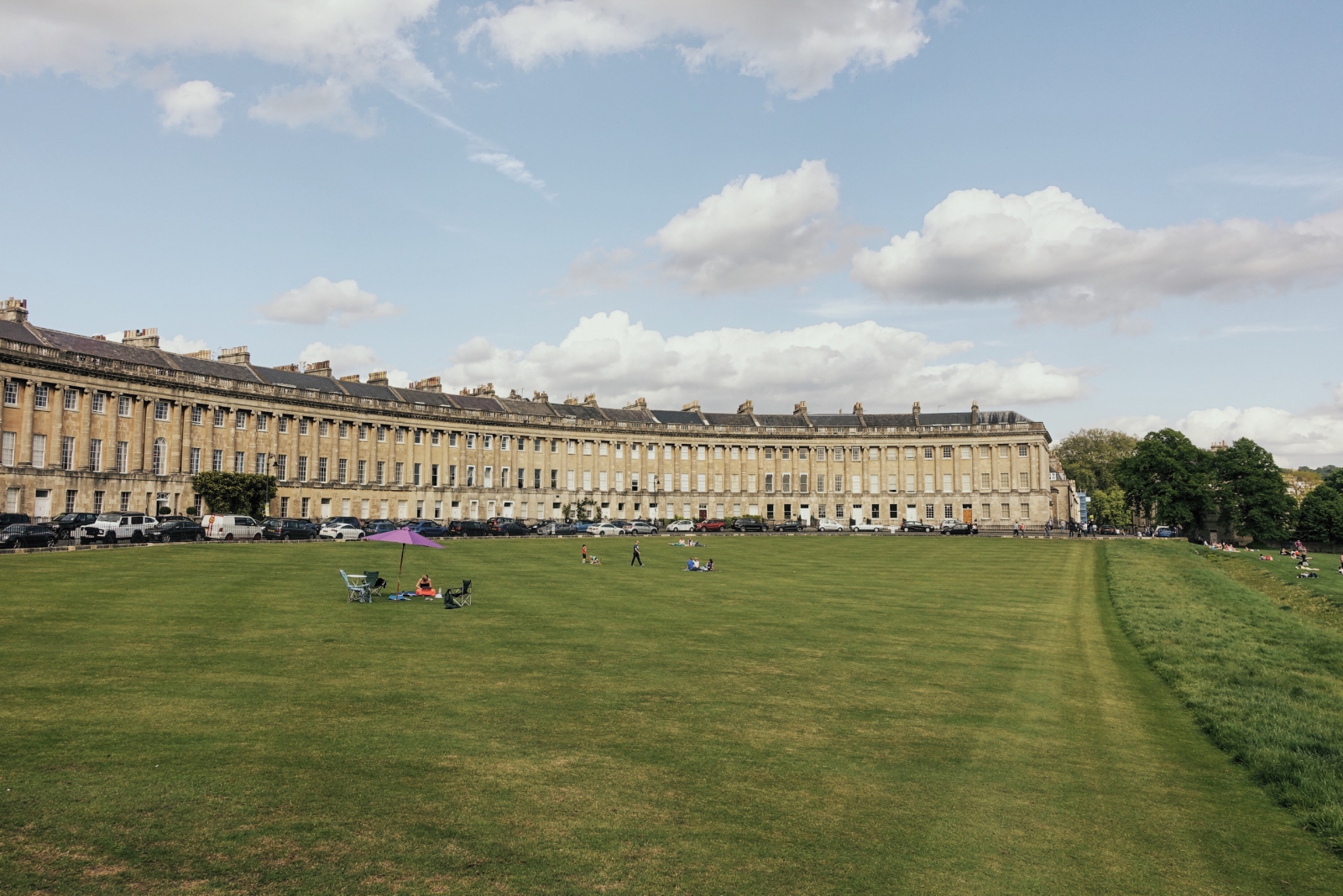 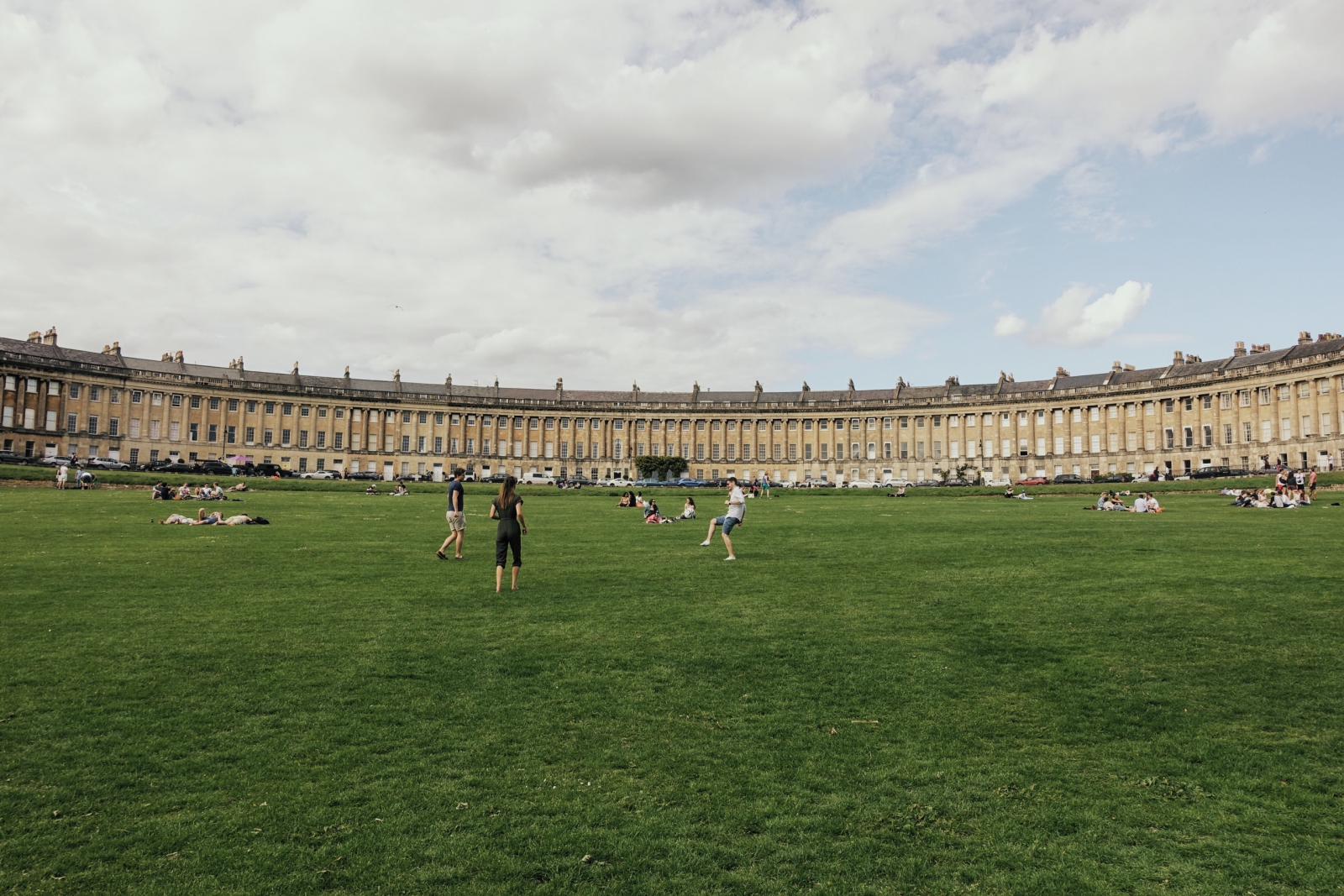 As it grew dark, we returned to the train station. The crowds were gone. It was a comfortable ride back to London.