A Cabin in the Mountains

Our weekend road trip was all planned out. On Friday afternoon, I would leave work early, pick up my bag, and head to N-’s apartment. We would get the rental car and pick up our friend Luis from his office in Palo Alto (1 hour), then drive to our accommodations just south of Yosemite National Park (3.5 to 4 hours), stopping for a quick dinner on the way. 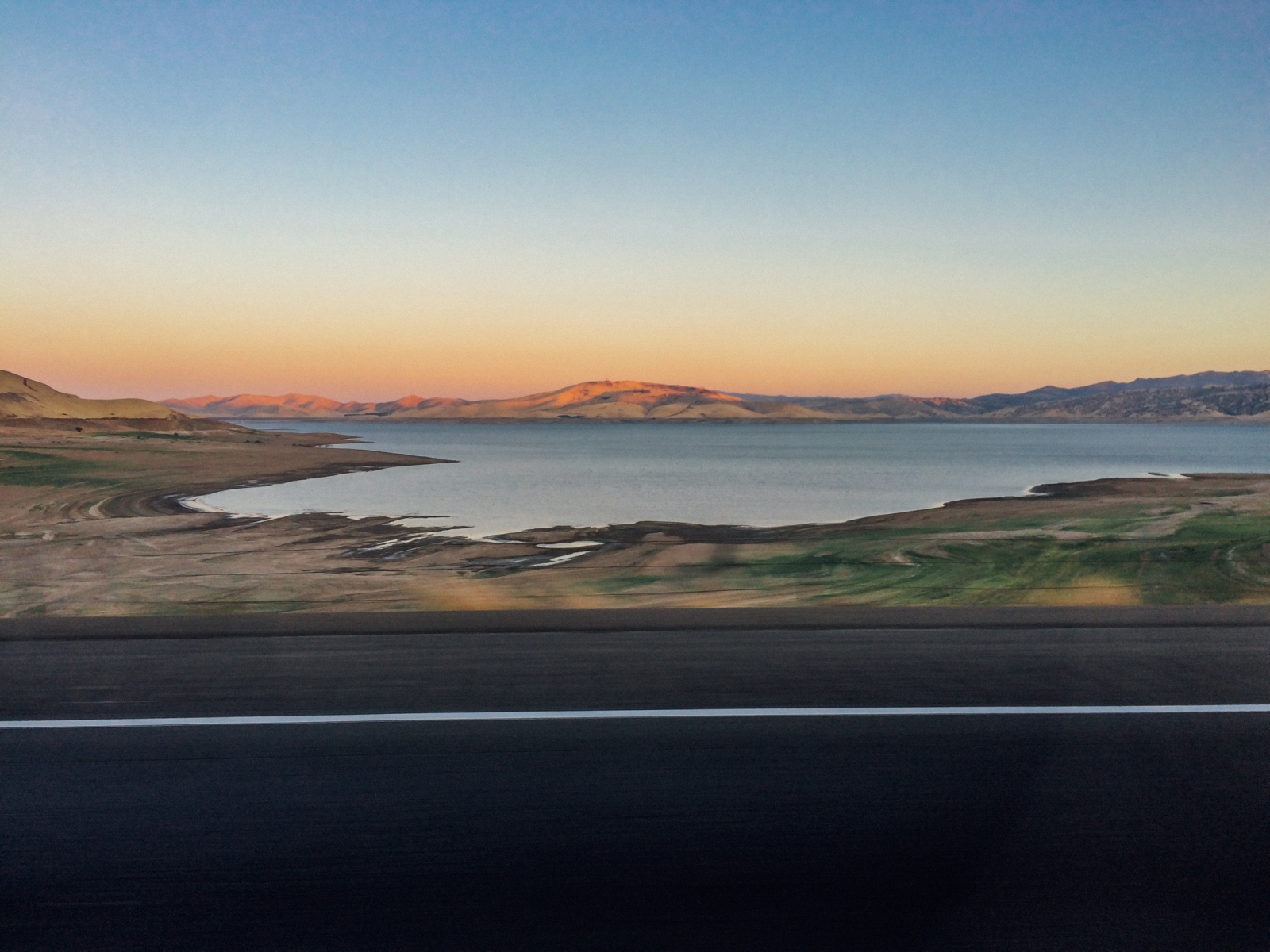 A few things took more time than expected: freshening up, picking up the car, a leisurely dinner at In-N-Out, and perhaps one too many bathroom stops.

And so it was that we were still on the road after nightfall.

The Long and Winding Road

Normally, driving at night wouldn’t have been a problem. But there was one thing we hadn’t expected: Once we got off the freeways, there were no longer any street lamps on the road.

Apart from the occasional passing car, we were alone. Our headlights provided our only illumination. 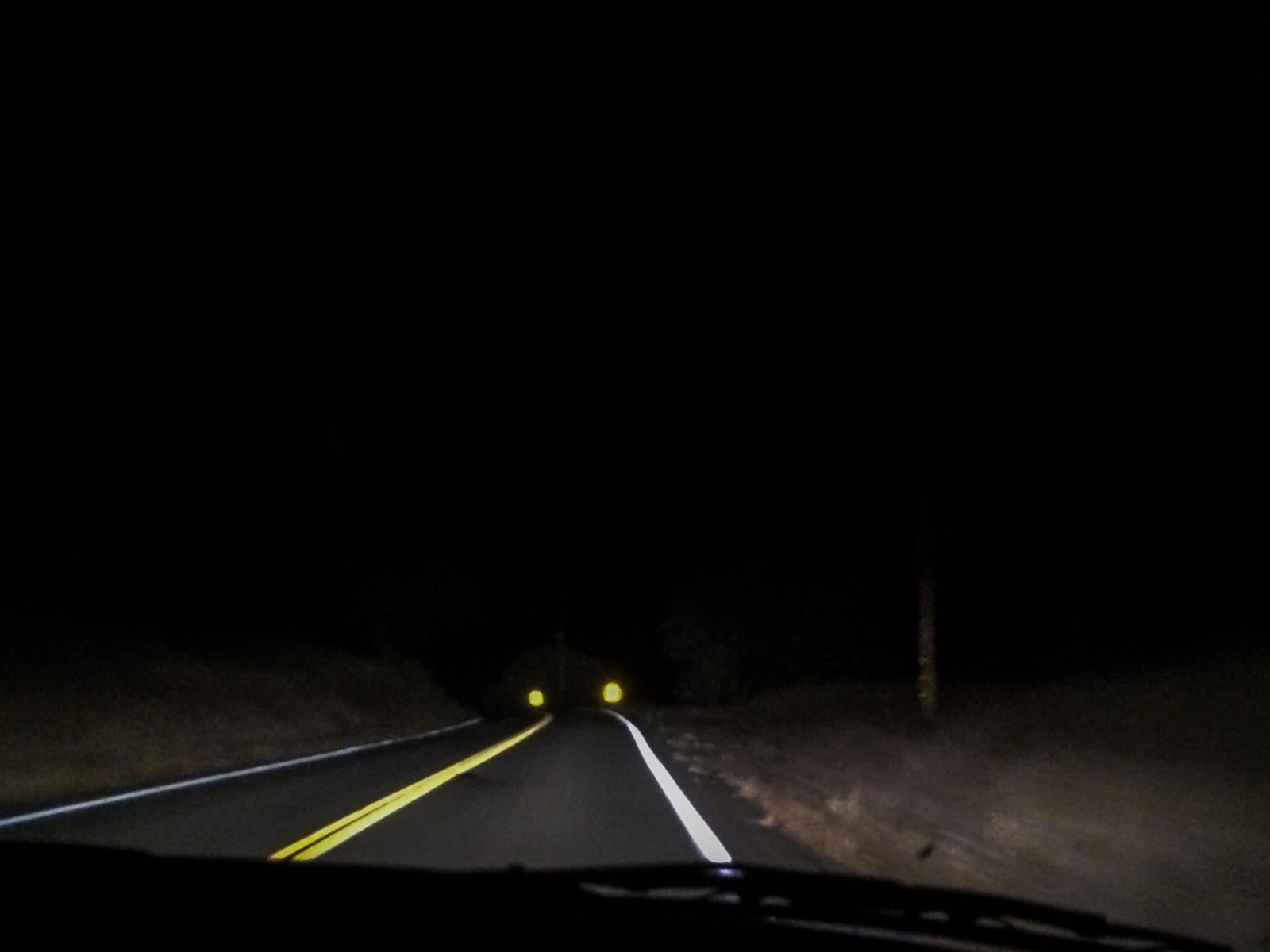 The road grew more and more difficult. It curved left, right, left, right, left—and it didn’t stop. We could never see enough to plan ahead; all we could do was follow the lines that curved before us. 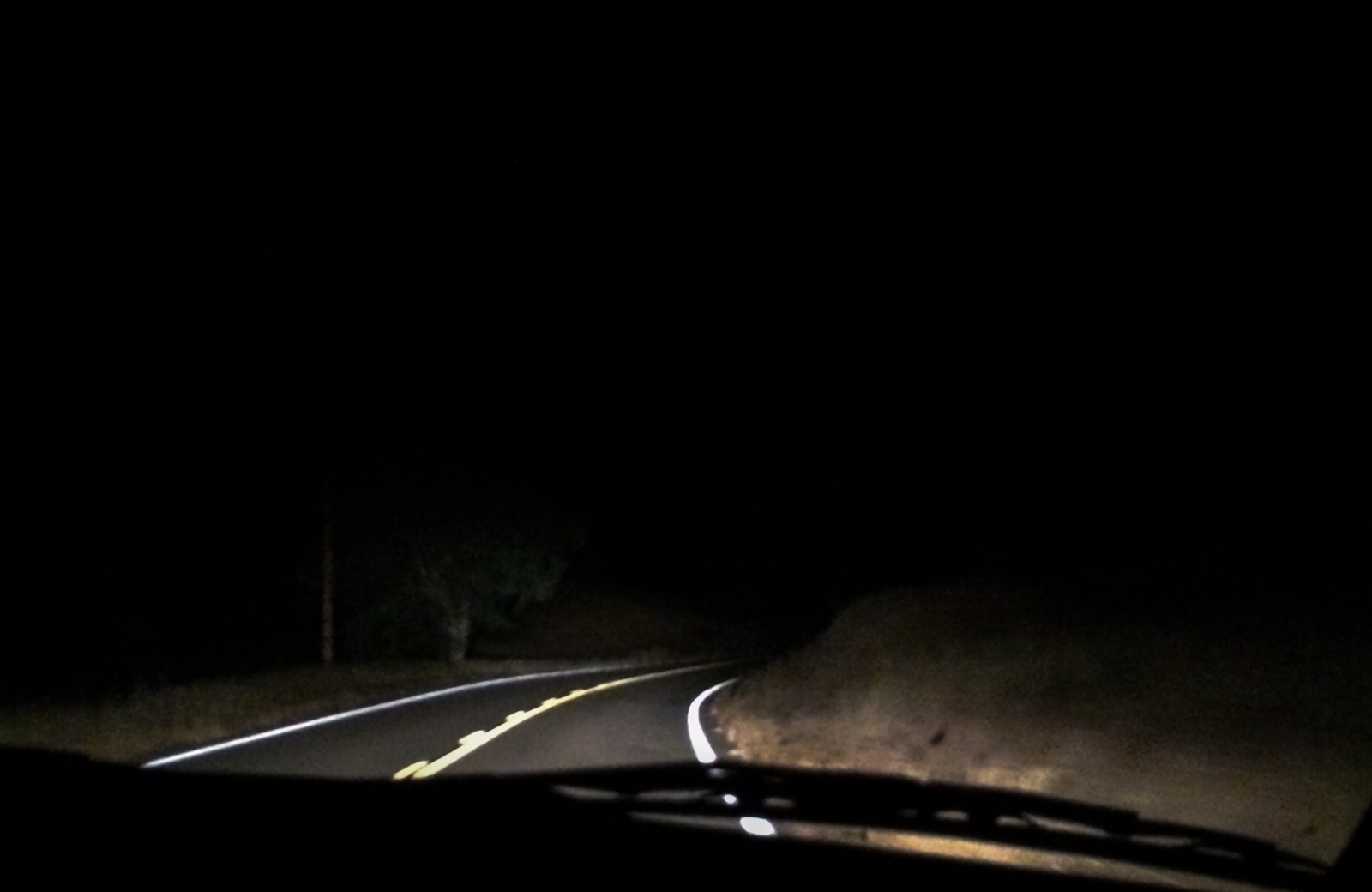 Once, N- accidentally turned off the headlights, and we found ourselves in total darkness. We couldn’t see the road in front of us, and we were still driving.

We started to get antsy as the evening wore on. Our phone signals—all on T-Mobile—gradually weakened. In the end, we had none at all. We were now off the grid. Thankfully, Google Maps had saved the directions on N-’s phone.

Our phone signals didn’t fully return until we drove back to San Francisco two days later.

A Cabin in the Mountains

Our destination was a cabin we had rented on Airbnb for the weekend. It was in an area called Oakhurst, 14 miles south of Yosemite National Park. It was a modern cabin in a rustic setting, providing the perfect balance of nature and present-day comforts.

For some reason—it may have been our city-dweller naiveté—it hadn’t dawned on us that we might have trouble finding this cabin. We went back and forth on the narrow road it was supposedly on, trying to catch a glimpse of it in the darkness through the shrubs and trees. There were no street lamps here either.

This cabin wasn’t only in the middle of nowhere; it was also on the side of a mountain. As we drove down the road, we saw entrances to side roads here and there, no doubt leading to other cabins in the area.

We found the right side road by driving slowly and looking at the stone markers. The road sloped down so steeply that it felt like we were driving straight down the mountain.

After parking, we used our phone flashlights to find our way down the stairs to the cabin’s front door.

It was a relief to finally enter the cabin and flip on the lights.

The interior looked new, but was furnished in a rustic way. It was a strange contrast, though not unpleasant.

A fireplace and plush leather seats made for a cozy living room. A stuffed bear sat in the corner.

Note: All interior photos are from the Airbnb listing. 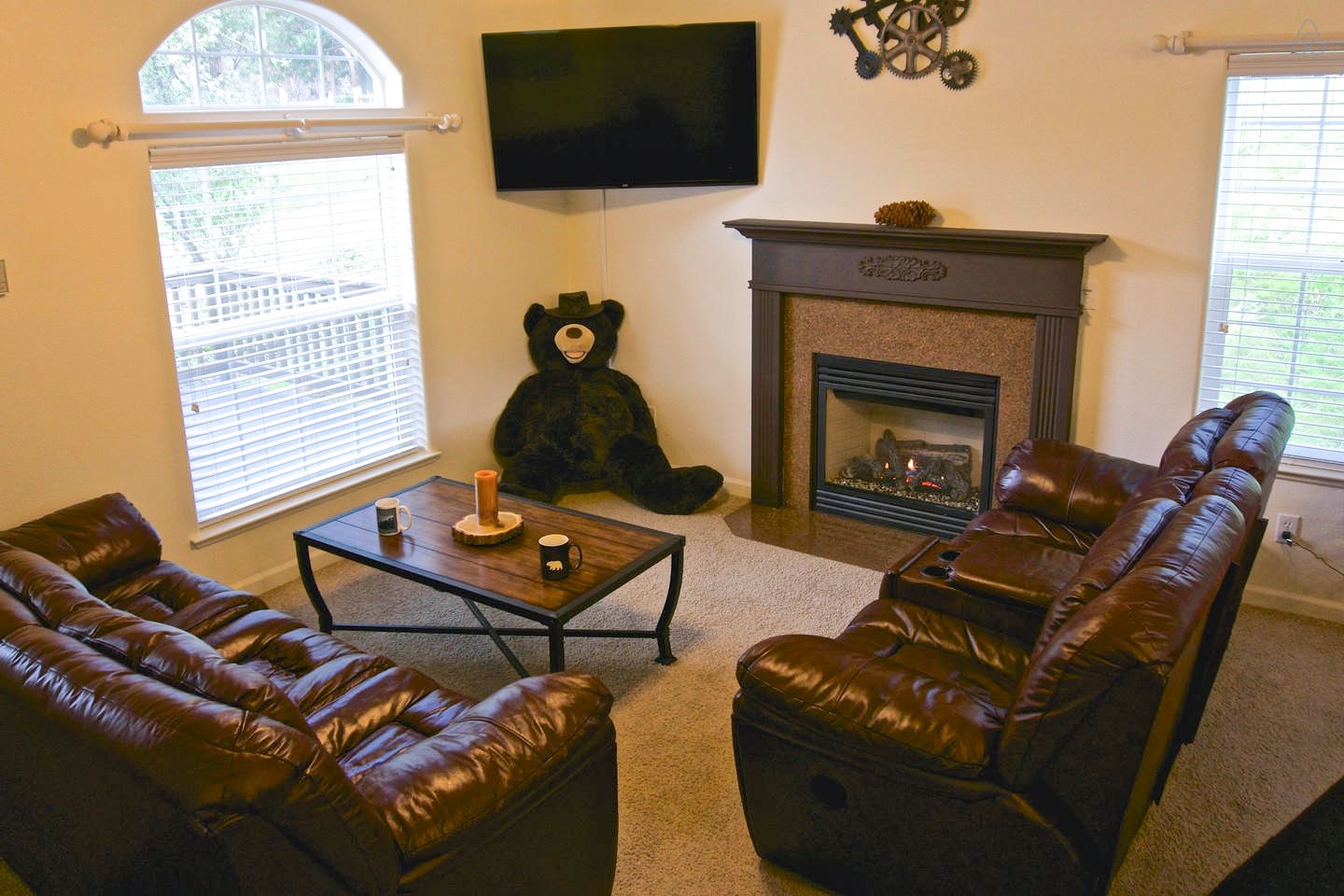 As for the kitchen, an antler chandelier hung over the dining table. A framed print of a bear kept the room in theme. 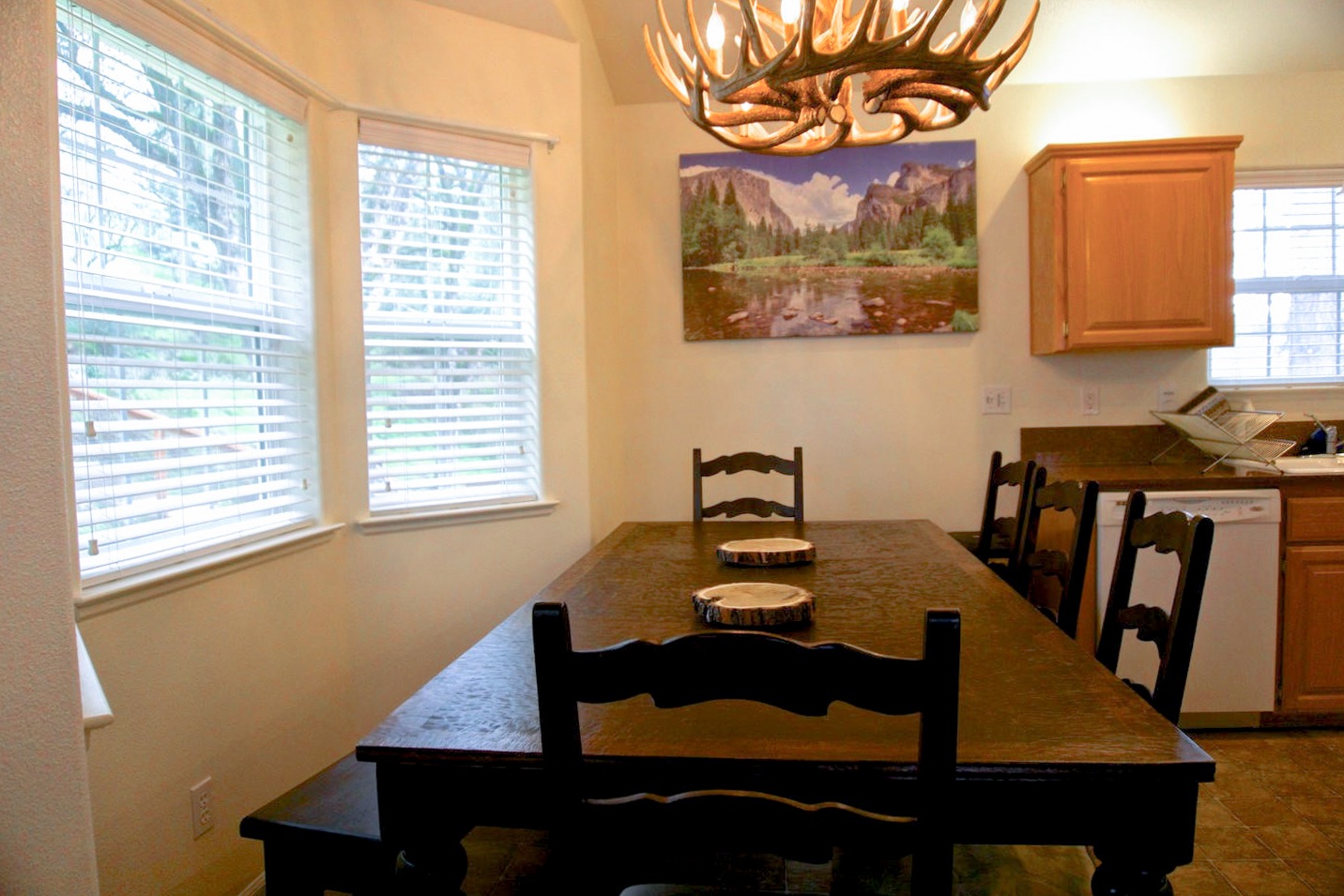 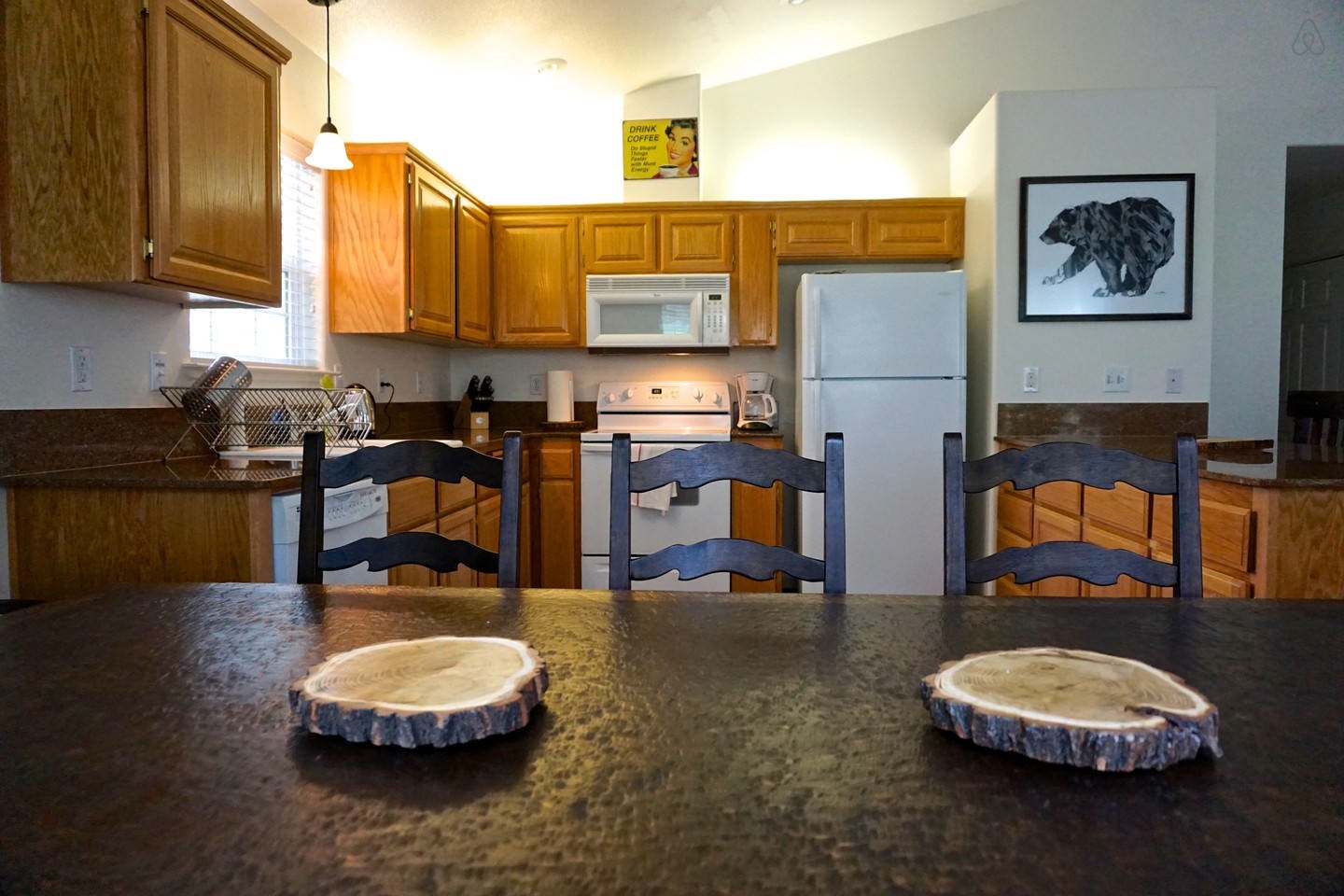 It was so quiet you could hear every rustle from the woods outside.

We were in a cabin in the mountains, and it was fantastic.

A Quiet Night In

N- and I took the master bedroom, which featured a queen bed, a sofa, a bench, and a vintage trunk. It also had a large walk-in closet and an en-suite bathroom with two sinks. 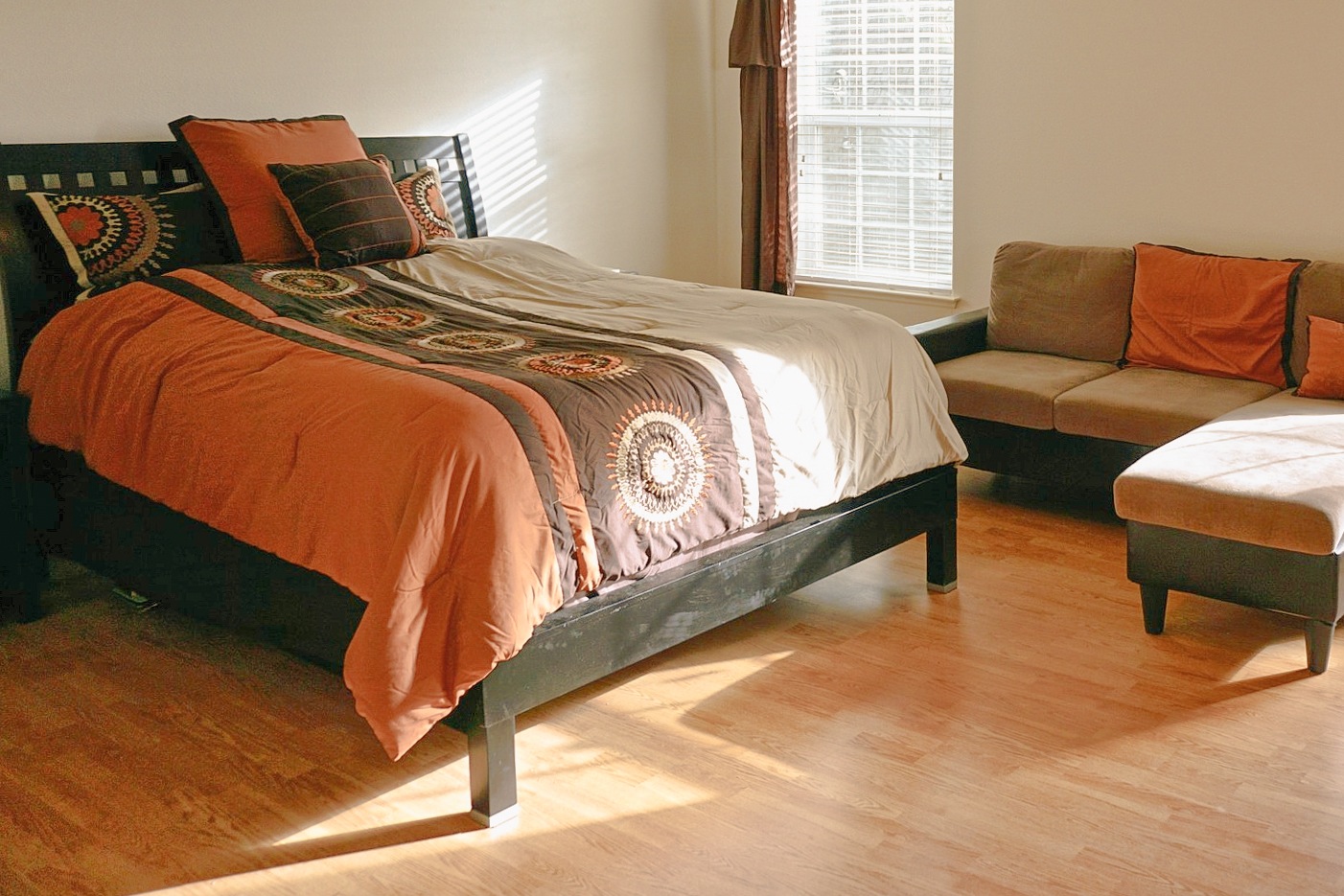 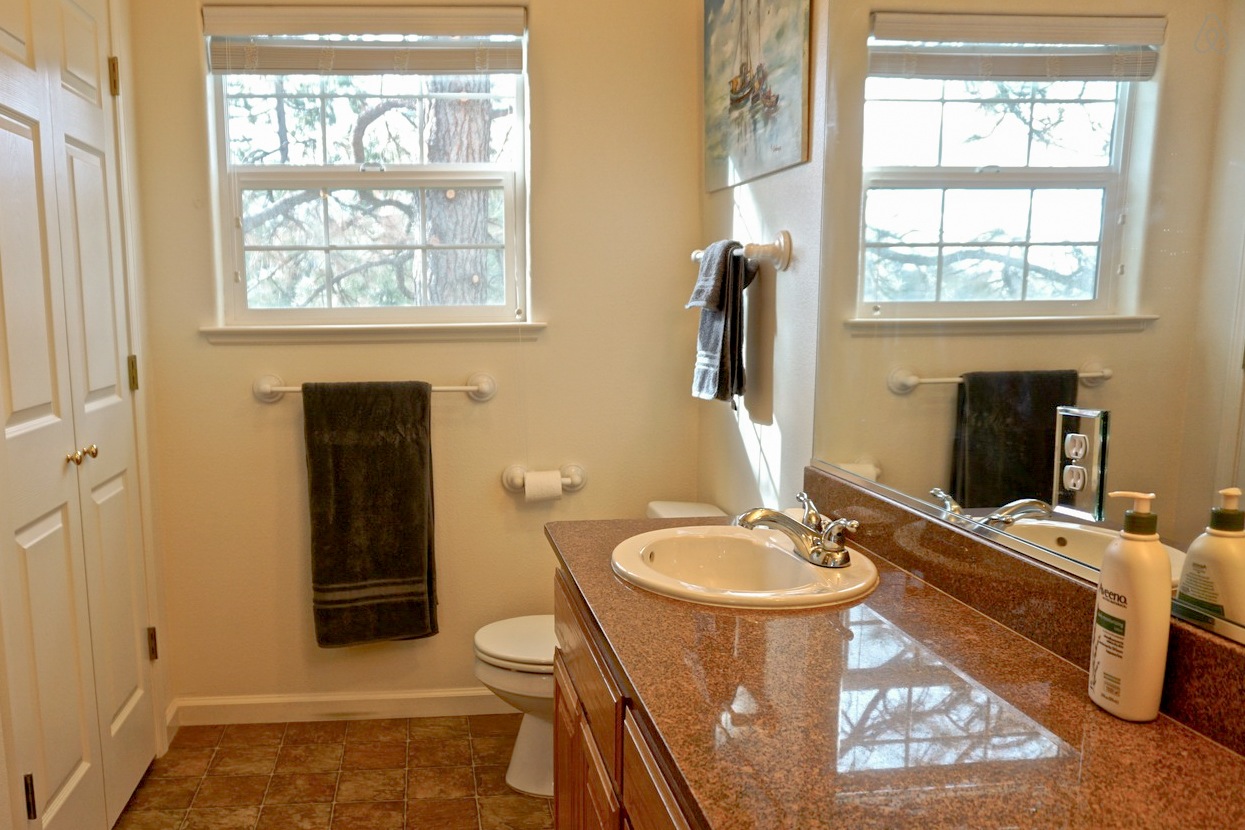 Luis took the second bedroom, which had a queen bed, a leather recliner, and a large window that looked out onto the woods. 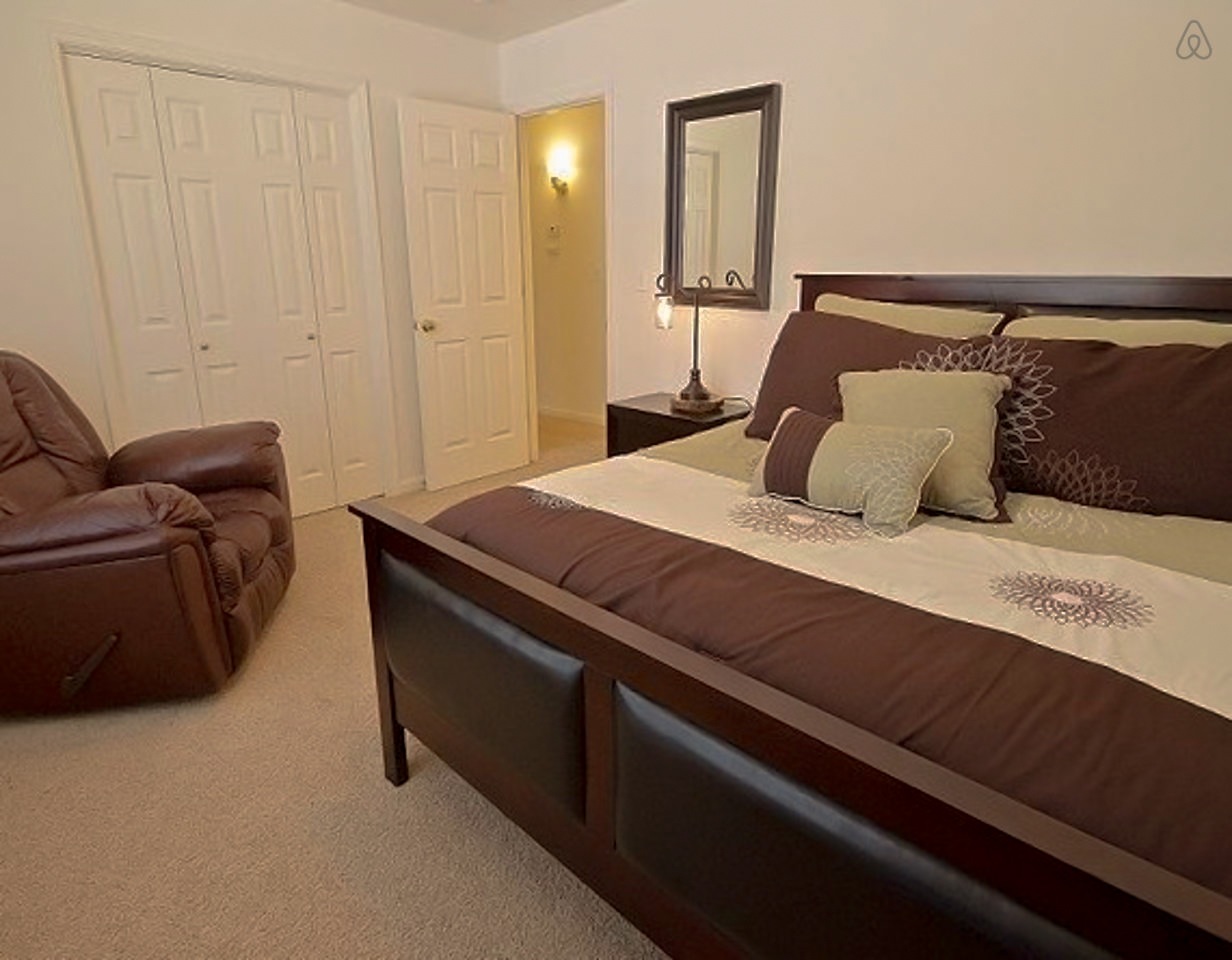 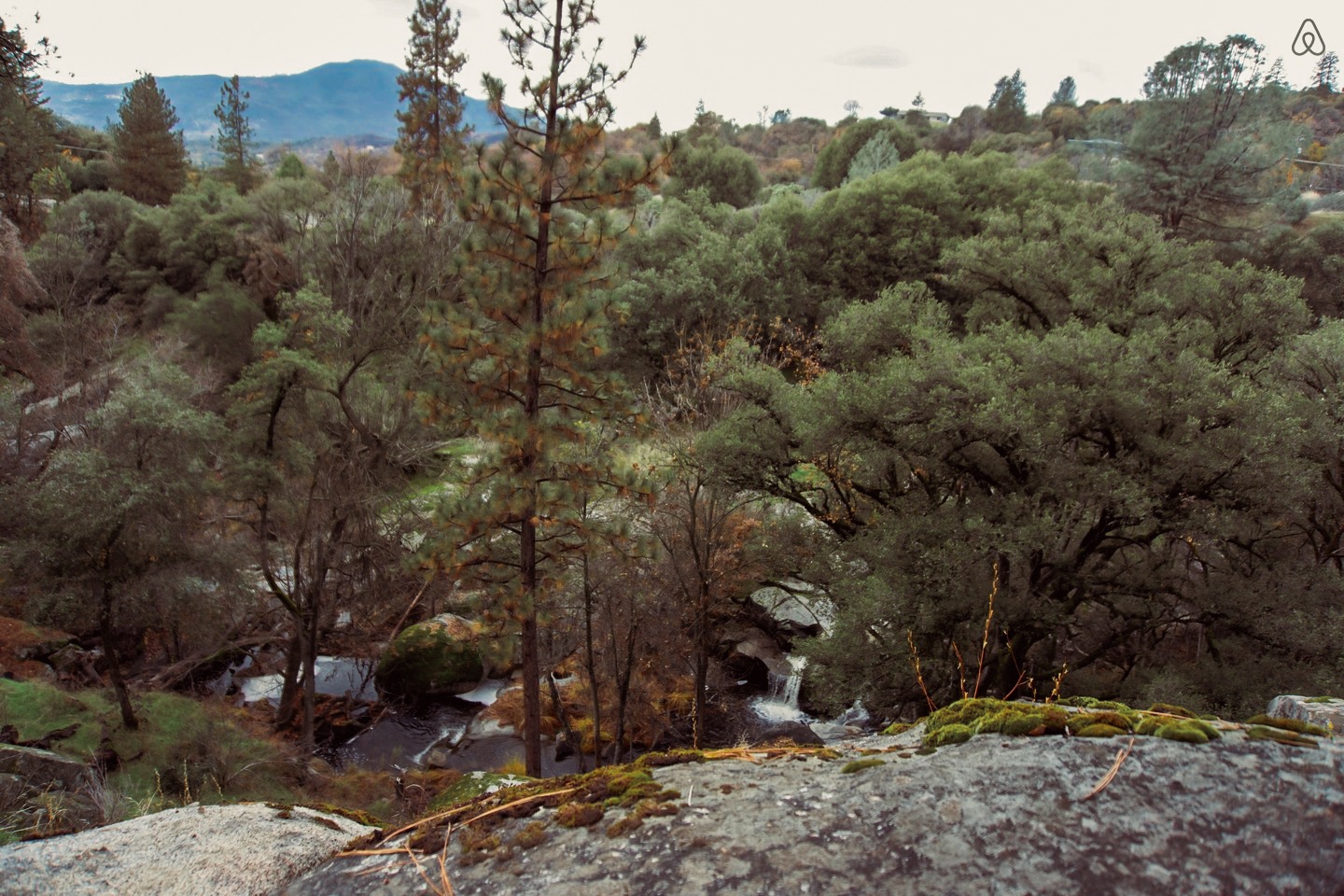 There was also a third bedroom. It looked like a children’s room and had three beds. All in all, the cabin could have slept eight people. 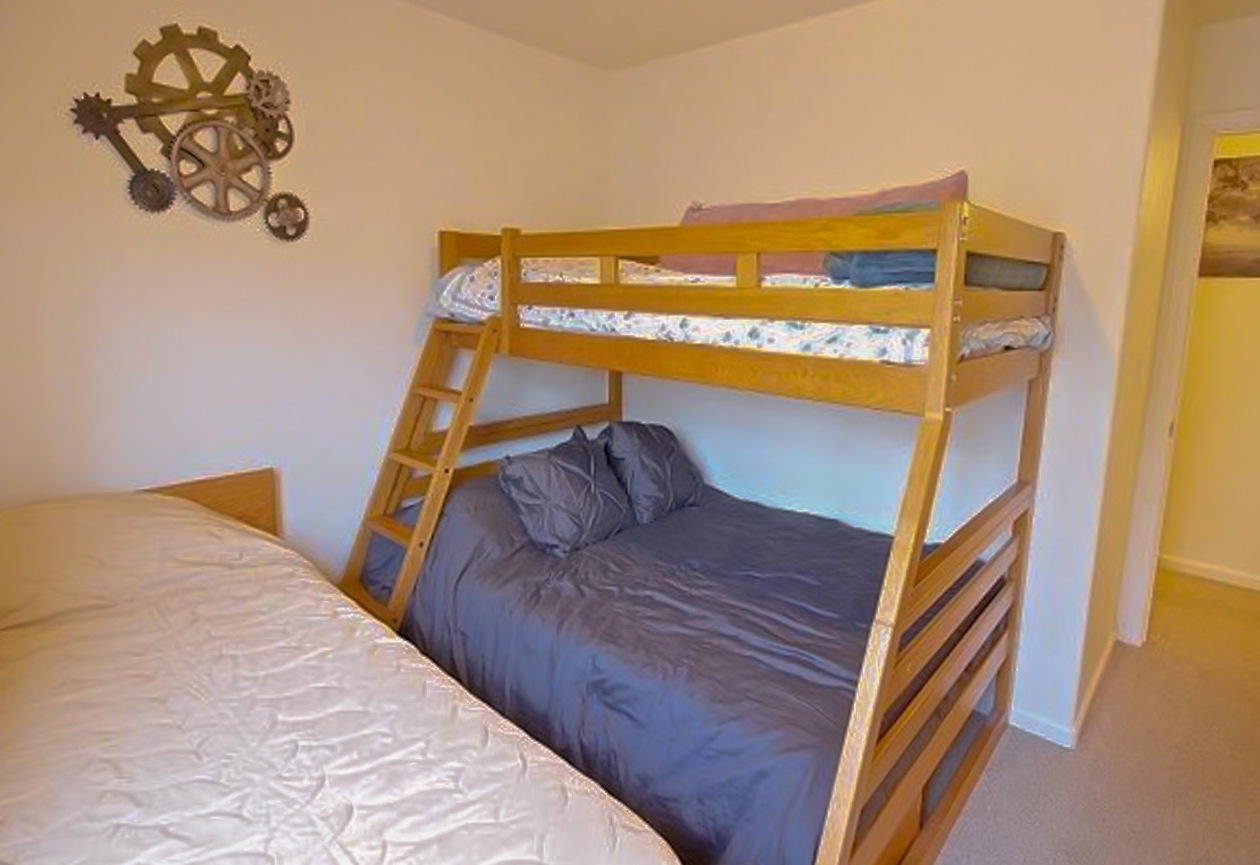 We were tired from the long drive, so it was a quiet night in. I unpacked, took a shower, and went to sleep.

The next day, as we left the cabin to start our day at Yosemite National Park, we saw that the garbage bin outside had been knocked to the ground overnight. Some bread was on the ground in front of it, and N- swears there was a portion of it bitten off.

“Maybe it was a dog,” we told ourselves, and left it at that.

After a fun day exploring Yosemite, we drove into Oakhurst’s town proper for dinner. It was a small town with a tiny number of restaurants, mostly diners and steakhouses. We’d had breakfast at a diner, so we chose Sweetwater Steakhouse for dinner.

The service was terrible but the food was decent. Also, after an entire day of no Internet access, N- and Luis were glad to find a wifi network here. It was named linksys (a popular brand of routers) and had no password. Needless to say, it was probably the least secure wifi network of all time. We didn’t even know if the restaurant owned it. N- and Luis connected to it. I opted to wait until we got back to the cabin.

It had been a wonderful day in nature, but we looked forward to getting back to the cabin for wifi, real toilets, and kicking back with the beers we’d brought with us.

The Cabin in Darkness

After parking, just like the night before, we turned on our phone flashlights, went down the stairs, fumbled with the keys, opened the door, and flipped on the lights.

Except this time, they didn’t turn on.

After fiddling with the switches and checking other appliances, we realized the power was out.

Outside the cabin, it was pitch black.

Inside the cabin, bathed in darkness except for our feeble flashlights, our surroundings took on an eerie quality. The furnishings loomed in the shadows and suddenly seemed… unnatural.

Or the stuffed bear smiling in the corner.

Or the three empty beds.

It was so quiet you could hear every rustle from the woods outside.

We were in a cabin in the mountains, and darkness had fallen.

I suggested looking for an emergency light. Surely they had one here… right?

We searched the entire cabin. They had everything. A hand mixer. A statement canvas print. An emergency ladder.

But they didn’t have emergency lights.

“This would be the perfect time to tell ghost stories,” I said.

Luis wasn’t enthusiastic about the idea either, so I dropped it.

Looking for a Signal

We needed to call our Airbnb hosts. There was no phone in the cabin, so we went back to the car and drove all the way back to town.

We parked outside Sweetwater Steakhouse (which was closed by now) and saw that the linksys wifi network was still up. N- connected and used Google Voice to make the call.

It was answered by Century 21, a real estate company that apparently also managed vacation rentals.

The agent offered no help.

She didn’t seem to understand the concept that we were only renting the place for two nights and we had no phone signal there.

N- hung up in frustration. He managed to email our hosts just before the wifi went down.

We drove back to the cabin.

It was then that Luis realized he had his on-call wifi stick with him the whole time.

Wifi on the Verizon

On-call rotation is common among software engineering teams. When it’s your turn, you get a wifi stick or a phone with cellular data so you can respond quickly if something goes wrong with the systems you’re responsible for.

It just so happened that Luis was on call that weekend. He retrieved his Verizon-network wifi stick and found that it was actually working here.

We called PG&E. They said the power outage wouldn’t be fixed until 5:30 AM the next day.

Now, this wasn’t the end of the world. Practically speaking, it was merely inconvenient and made our Airbnb stay unduly expensive given the available utilities.

Still, we couldn’t help feeling on edge after getting this news. After all, we were in a remote cabin 200 miles from home, surrounded by darkness.

Shower in the Dark

Coming from the Philippines, I’ve had my fair share of blackouts, brownouts, and everything in between. So as I took my evening shower in the dark, it felt almost nostalgic.

The bathroom window looked out onto the woods, but I tried not to think about this.

My every movement cast shadows on the walls. I tried not to think about this either.

The creepy part about showering in the dark is not the actual shower. It’s when you step out and look at the mirror, dimly illuminated and fogged up from the steam. And you see your blurred-out doppelganger, her face blank and unrecognizable as a smear of paint as you watch her moving. That’s the creepy part.

Since there wasn’t much else we could do, we decided to just go to sleep.

It was stiflingly hot in our room, but N- and I kept the windows closed to keep out the allergens—and whatever else lurked outside. We remembered the overturned garbage bin, the half-eaten bread, and thought it would be best.

Also, if you remember, Luis’s large bedroom window faced the woods outside.

He slept in the living room.

Once the flashlights were off, it was pitch dark. I couldn’t see my hands in front of me. Even with my eyes closed, I could sense the darkness, the same way you can sense sunlight through your eyelids.

I slept fitfully. The power didn’t come back until 6:30 AM.

The morning light was beautiful when I stepped out the front door. It was a warm sunny day, and the trees rustled in a light breeze.

It seemed ridiculous how uneasy we’d felt the night before, the way it is when you wake up after a nightmare and everything is back to normal. 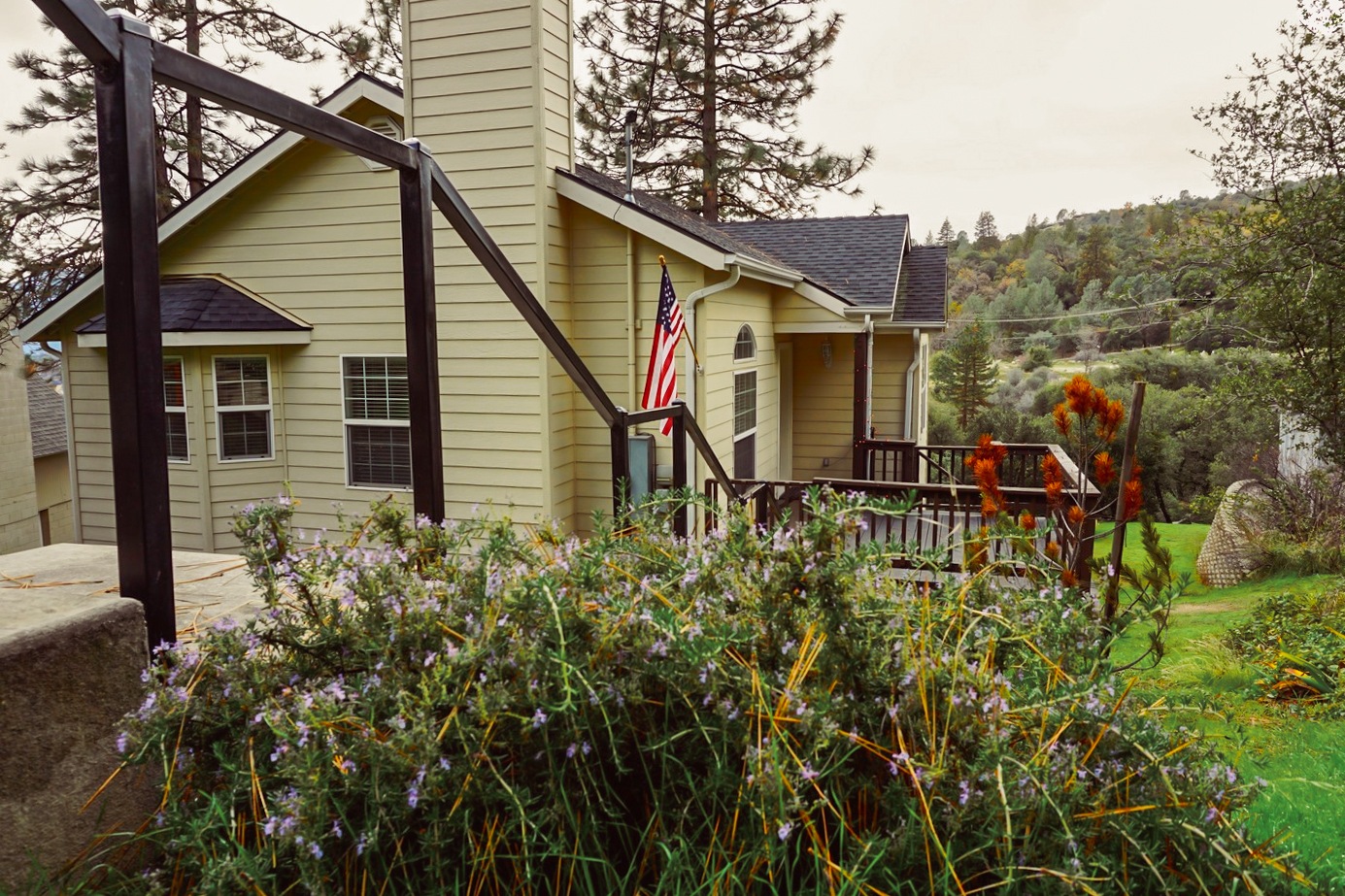 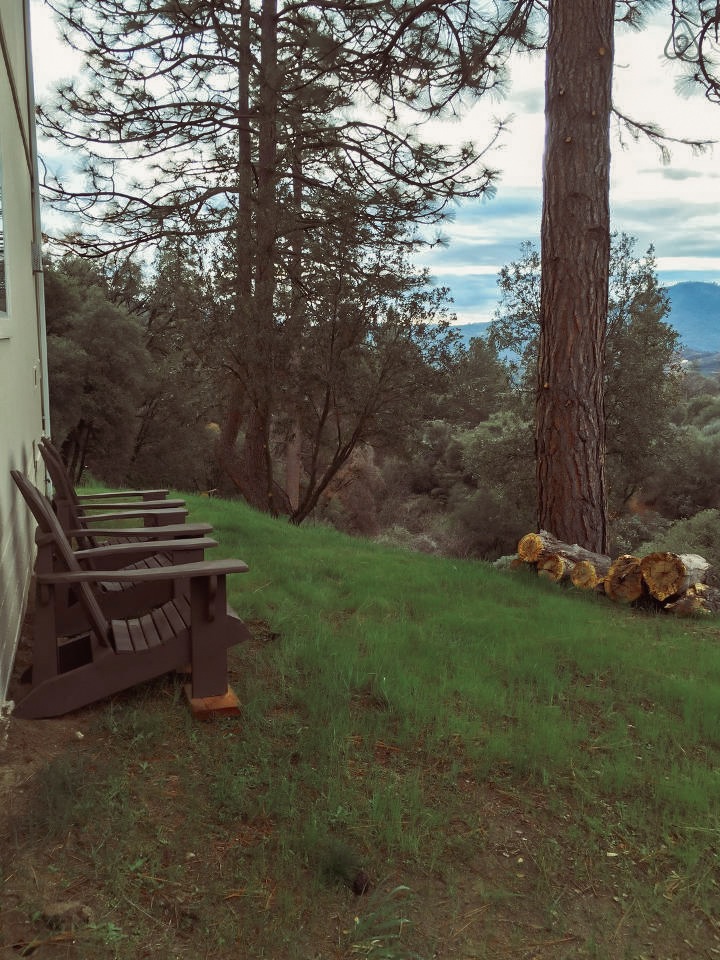 In the end, we were three people who were unprepared for both a power outage and an absence of phone signals—but being the gadget-obsessed tech workers we were helped us magnificently. We had smartphones that doubled as flashlights. We had power banks. We had Google Voice accounts. We even ended up having a wifi stick.

As for our hosts, they got back to us later that morning. We understood that the outage wasn’t their fault. Still, their management company could have handled it better. They’ve now stocked the house with emergency lanterns and flashlights in case this happens to other guests in the future.

This was one of the most memorable Airbnb experiences I’ve had. Would I book a place like this again? Definitely. But next time, I’ll be sure to bring my own emergency lights.

And maybe a ghost story or two, just in case.