N-, Luis, and I kicked off our Saturday morning with breakfast in Oakhurst’s town proper.

Pete’s Place was an old-fashioned family diner, complete with checkered green curtains and marbled wallpaper. It was the kind of place where the server called you “honey” and everything was fried. My chicken fried steak was doused in gravy.

A Series of Long Drives

After breakfast, we started driving to Yosemite National Park. It took 2.5 hours to get to our first destination inside the park. We worked off a paper map, and without a robotic voice telling us how much driving time we had left, it was a constant guessing game.

As the day wore on, it became apparent how much driving we had to do: a lot.

Yosemite National Park covers 1,169 square miles—25 times the land area of San Francisco. To visit our list of five must-see places over two days, we ended up spending 65% of our time driving and only 35% of it sightseeing.

I’m grateful to N- and Luis for doing all this driving—and keeping us safe while doing so. The road curved every which way, slowly increasing (and decreasing) in elevation. It was harrowing at times; many of the mountain roads didn’t have guardrails. Some sharp turns and curves made us nervous. Driving in Yosemite is not for the faint of heart.

On the road, I spent most of my time sleeping, reading, waiting, and trying to curb my motion sickness. But the drive wasn’t without its moments.

We were on the way to Glacier Point—the first must-see on our list—when we drove through a long, dark tunnel.

Just when we were starting to feel claustrophobic, we emerged on the other side, and the world opened up.

The mountains rose majestic before us.

The sky was clear and vast.

The contrast of going from a narrow tunnel to an expansive, beautiful landscape was nothing short of breathtaking.

Suddenly we were so small, just tiny in our little car. The world was infinite.

We were in the heart of Yosemite. And our adventure had just begun.

Yosemite is well-known for its granite mountains, waterfalls, sequoia groves, and scenic rivers. Mt. Lyell is the park’s highest peak at 13,114 ft. Yosemite Falls is the tallest in North America.

Established in 1890, the park is now visited by 4 million people each year, exploring Yosemite via 800 miles of hiking trails and 282 miles of roadways.

Glacier Point was a perfect introduction to Yosemite National Park. It provided a commanding view of Yosemite Valley, Yosemite Falls, Half Dome, and dozens of mountain peaks in the eastern Sierra range. 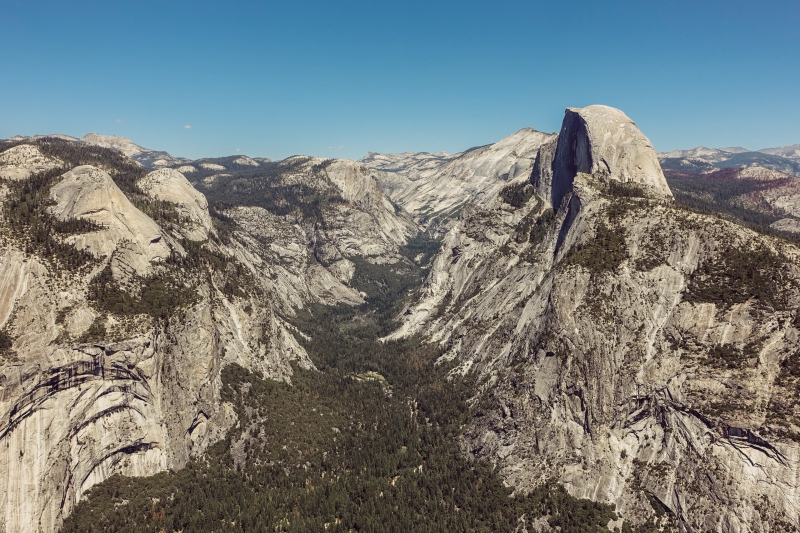 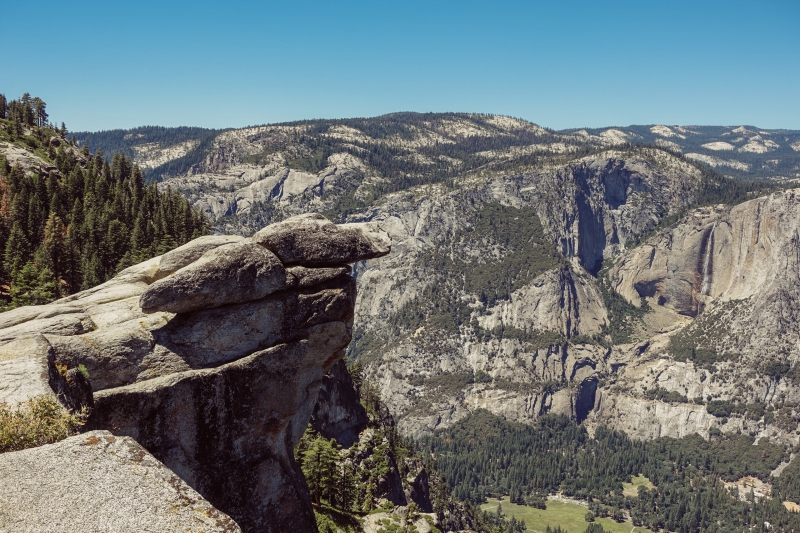 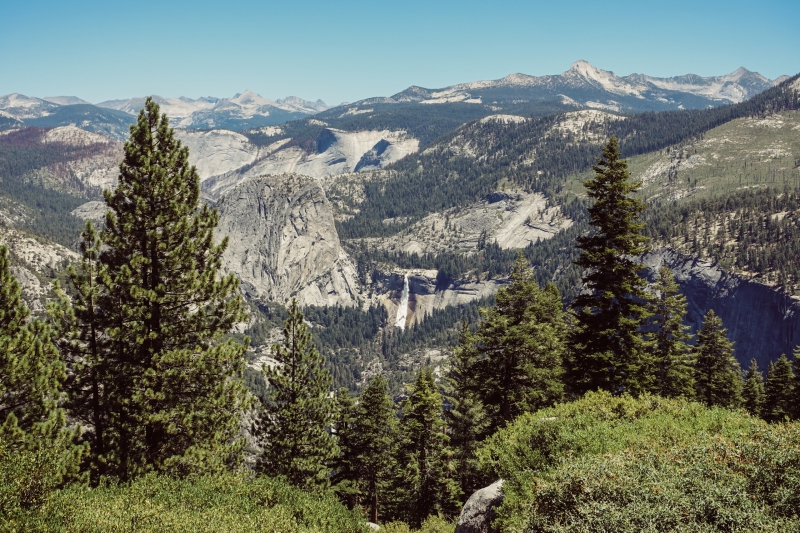 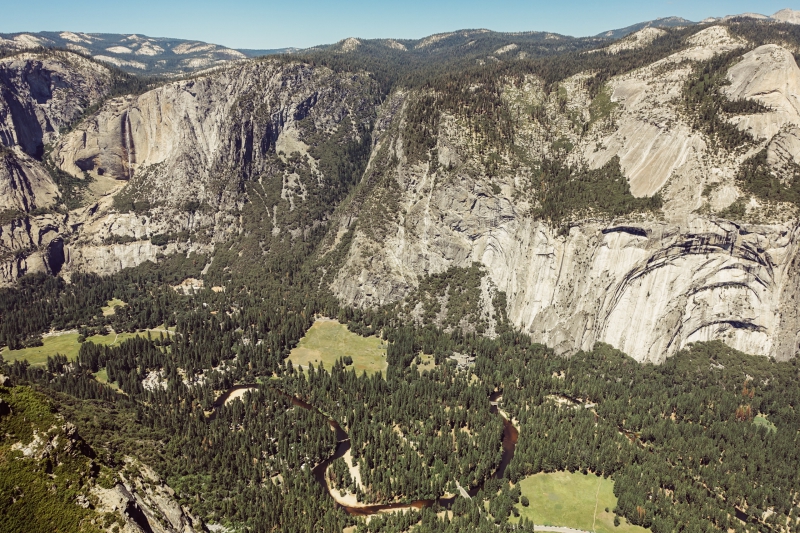 Unlike most of the other places we visited—which we shared with only a handful of people—Glacier Point was more touristy, complete with a large crowd, a café, and a souvenir shop.

If you can barely see the waterfalls in this photo, it’s because it was the same in real life. The strength of the water’s flow here depends on the season. We may have caught it on a dry day. 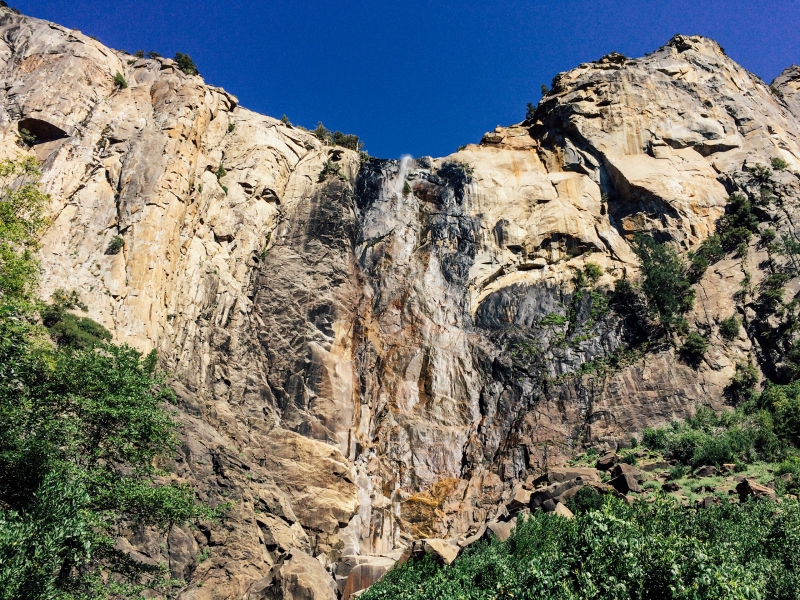 A lone chapel stood on a meadow with mountains as its backdrop. This was what greeted us when we arrived at this area—a striking first impression. 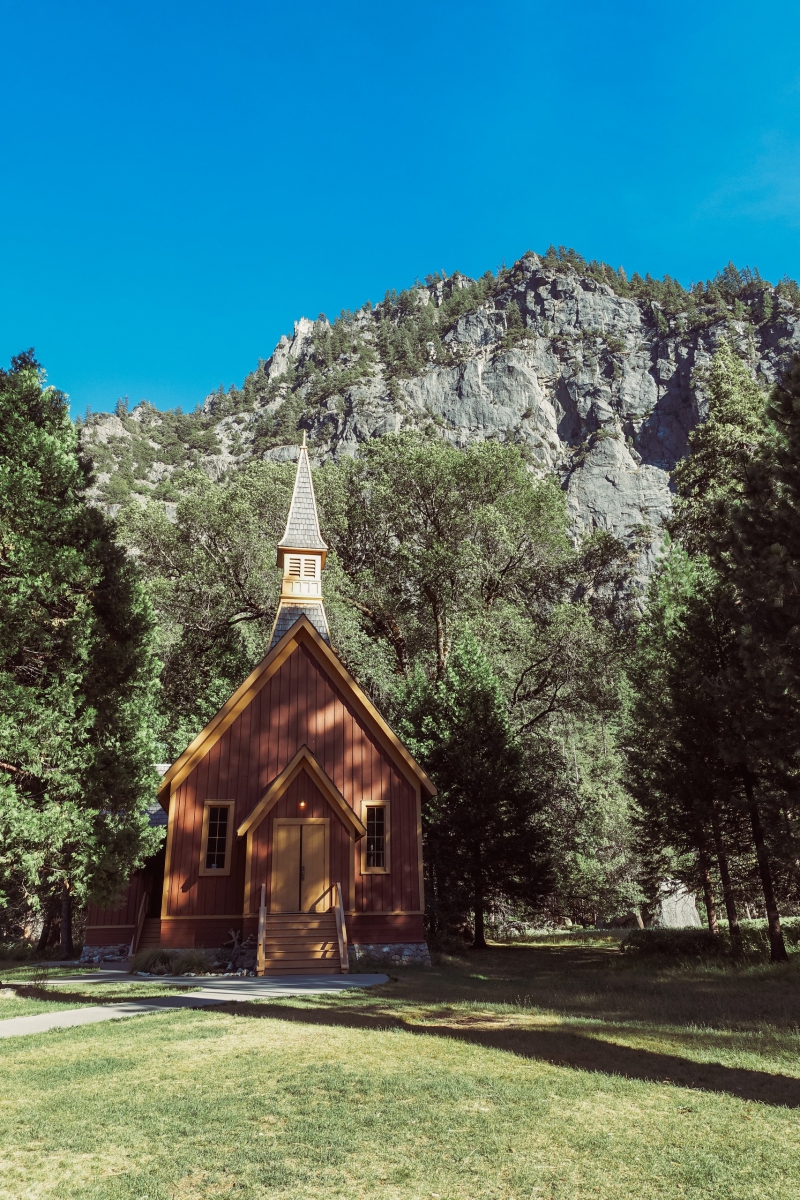 We enjoyed a leisurely walk on the trail through these lovely meadows. We crossed a bridge with a scenic view of Merced River. We strolled down a boardwalk and admired Yosemite Falls, roaring from a distance. The weather was perfect, and we were only too happy for some physical activity after a long drive.

This brings us to the end of our first day. It was another long drive back to Oakhurst, and you can read about what happened next.

On our second and last day, we started off with another breakfast at Pete’s Place. This time I had sausage, eggs, biscuits, and gravy—and made sure to ask for my gravy on the side. 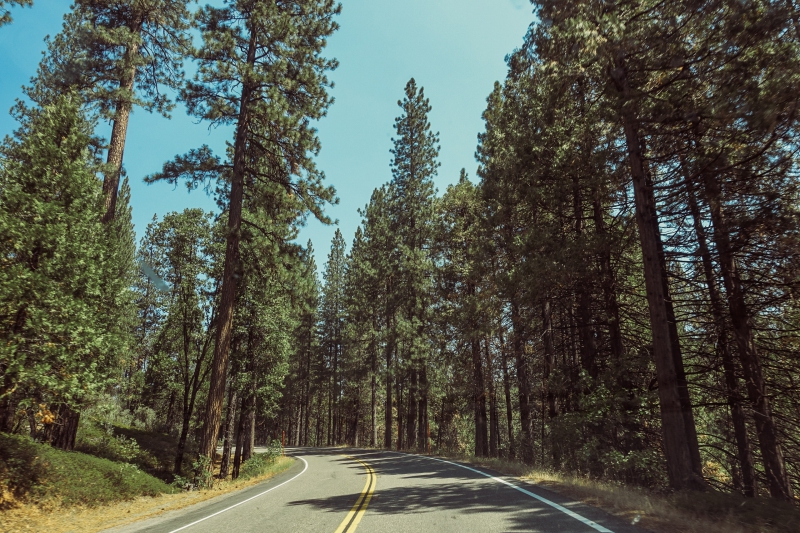 On the way, I saw a bear among the trees while looking out the window. However, we were going too quickly for N- and Luis to see it too.

Tenaya Lake was my favorite of the places we visited. Awe-inspiring mountains and a calming lake made for a beautiful combination. 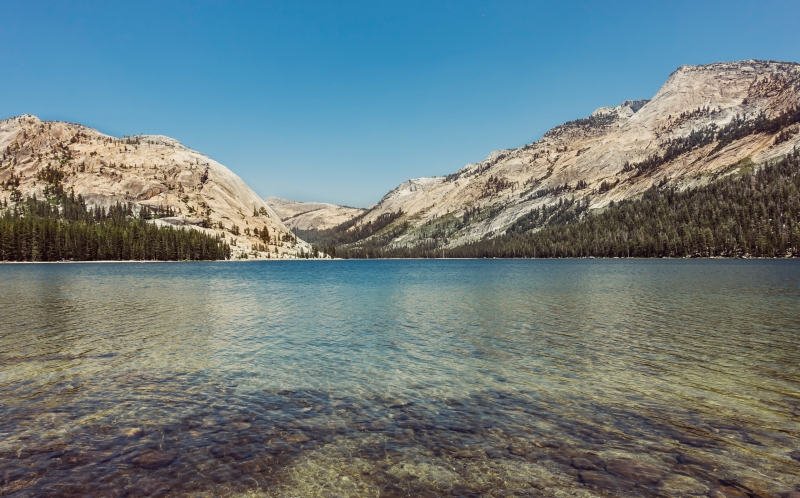 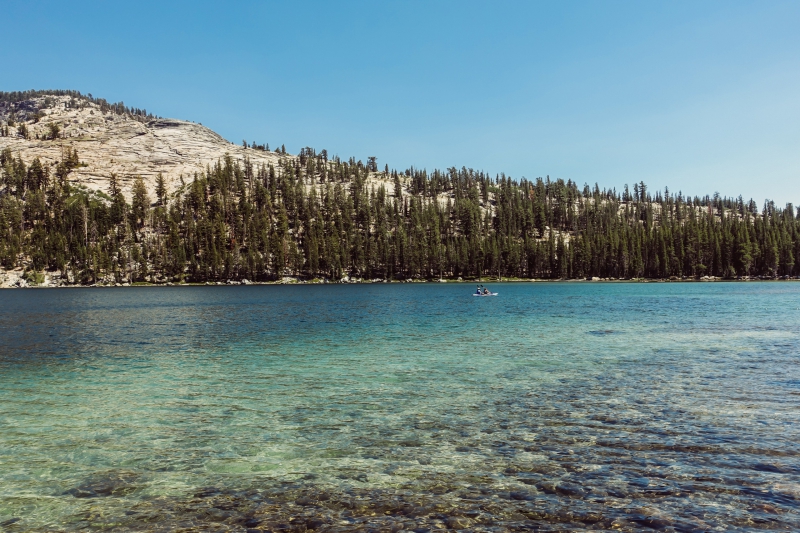 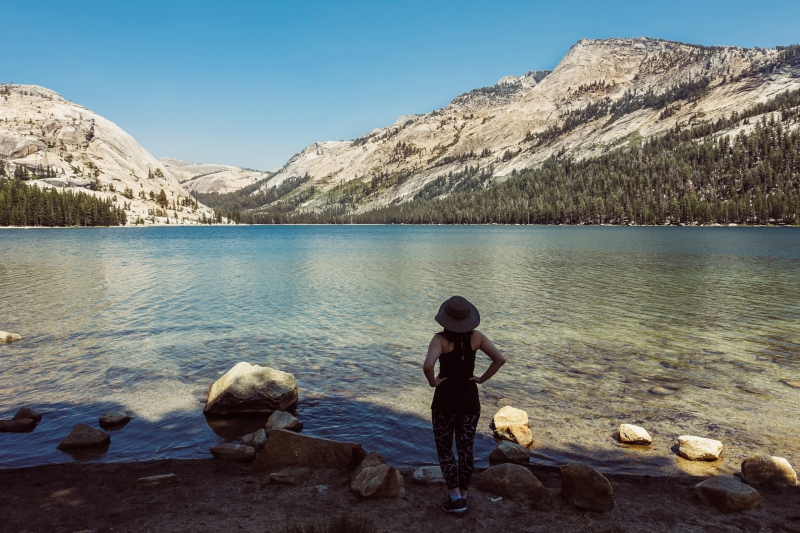 The water was blue and clear. Lofty peaks stood in the distance. Families and couples picnicked on the shore. It was picture perfect.

We had lunch at Tuolumne Meadows Grill. I had a burger and fries. We enjoyed our meal at a picnic table in the shade.

Then we proceeded to Tuolumne Meadows. This was a high-elevation area with grassy meadows that stretched out far and wide. The Tuolumne River meandered through the landscape. 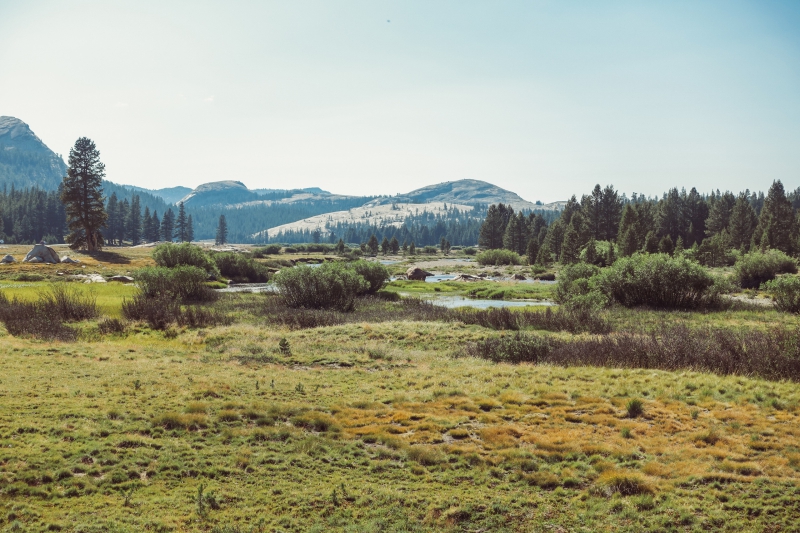 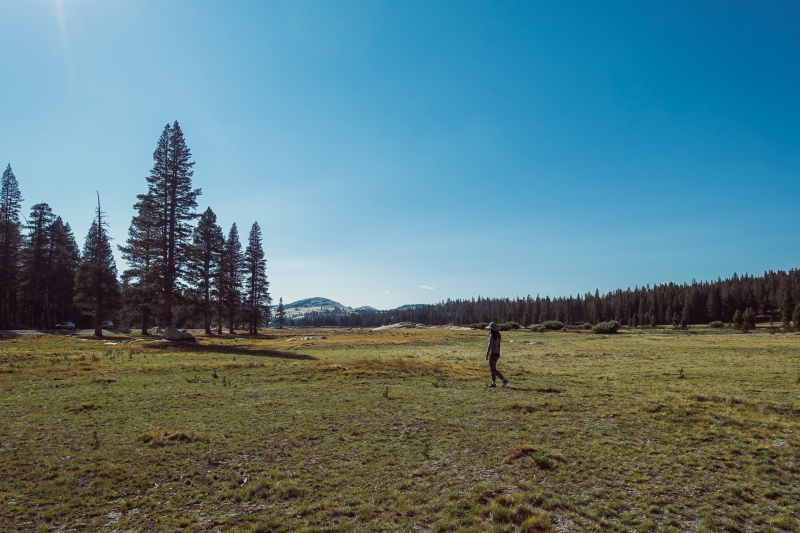 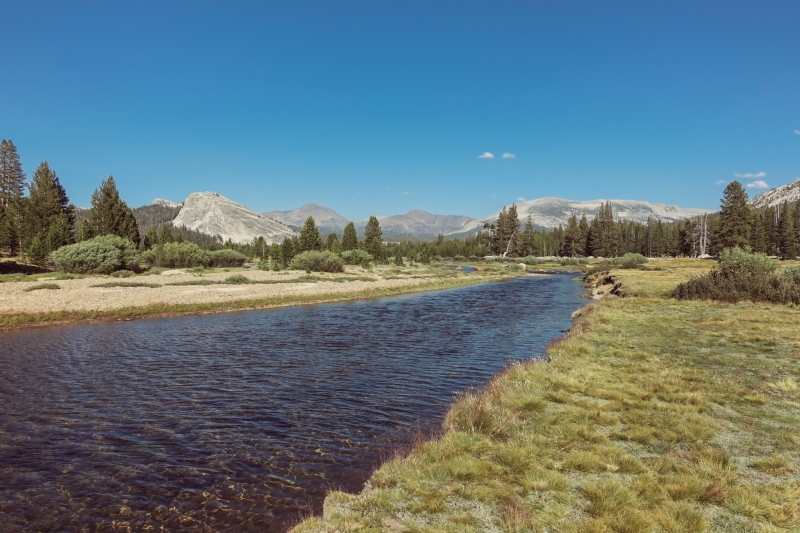 It was in Tuolumne Meadows that we all saw a bear in the wild.

It was a big brown bear just going about its business. We watched it from a safe distance. Then it crossed the path and went on its way. 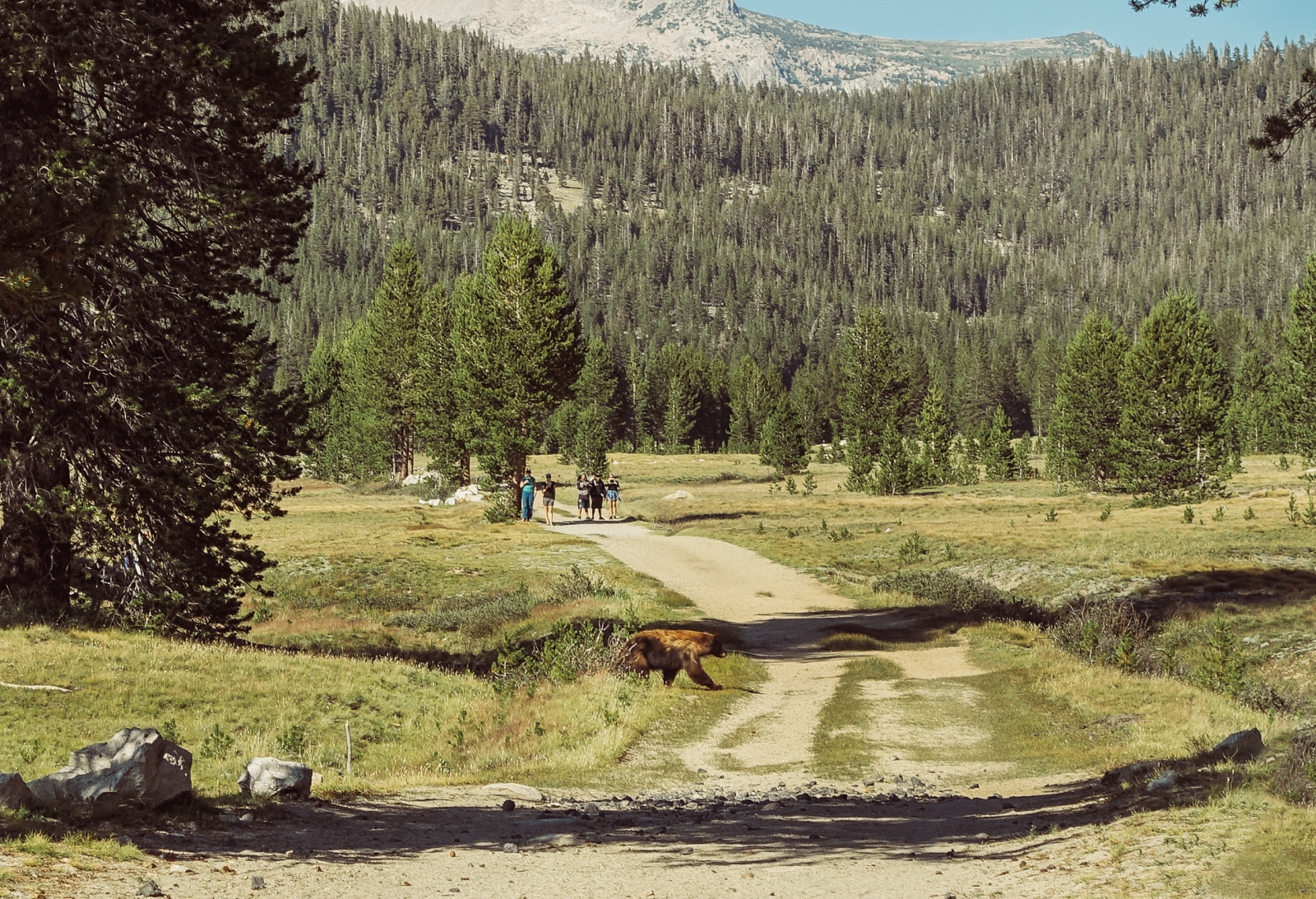 Seeing a bear isn’t uncommon in Yosemite, but we were lucky to see a bear on our very first trip there.

A little ways down, we watched a group of deer grazing on the riverbank. Later, two of them walked across the river. They must have thought the grass was greener on the other side. 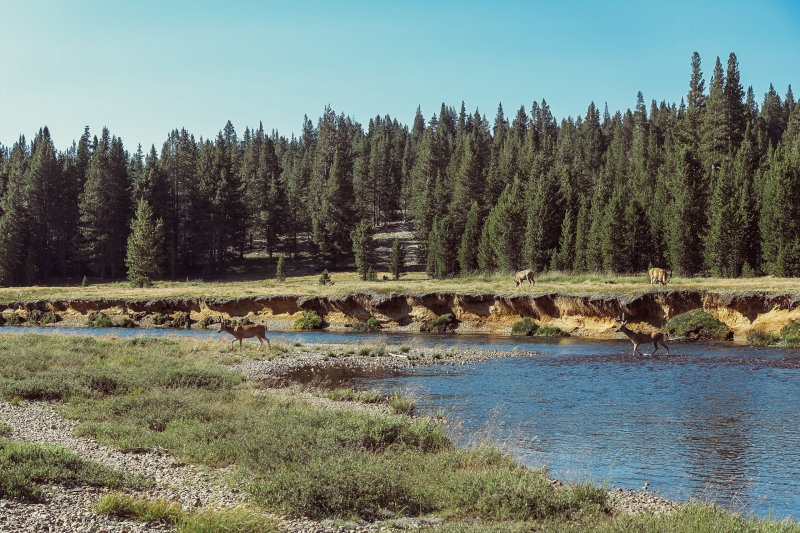 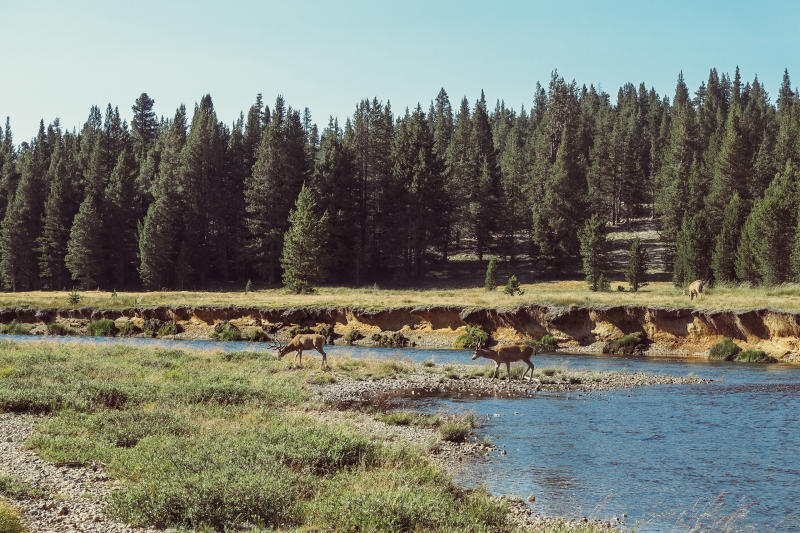 Tuolumne Meadows was the last of our list of must-sees. But since we were going to pass by a few more points of interest, we decided we could stop for breaks on our way back to San Francisco.

We stopped at one of Tioga Road’s scenic overlooks for some fresh air. 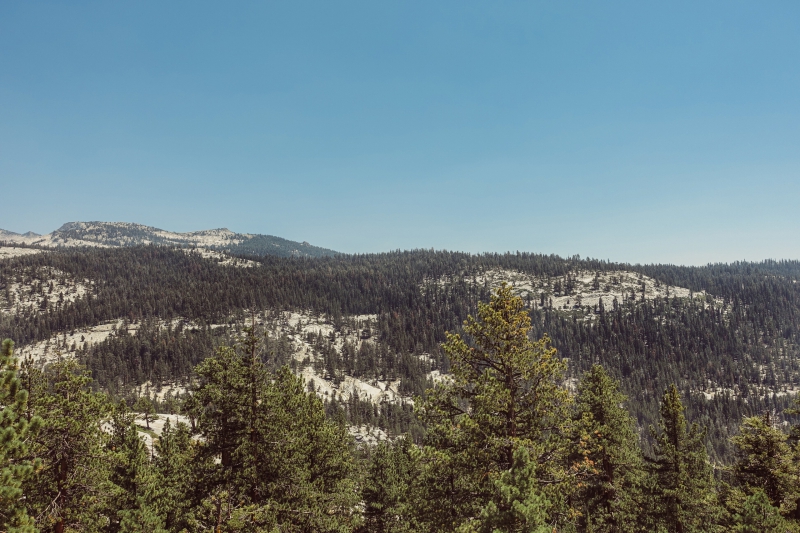 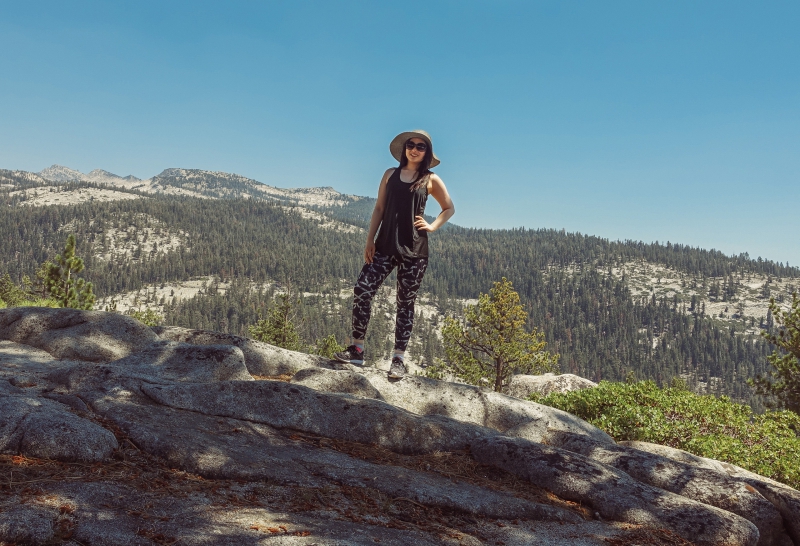 At Olmsted Point, we got a good view of Clouds Rest and Half Dome. The area itself featured slopes shaped by geological forces. Magma crystallized 80 to 100 million years ago to form the granite rock. Over time, erosion and glaciers sculpted and smoothed the rock, resulting in unique formations. 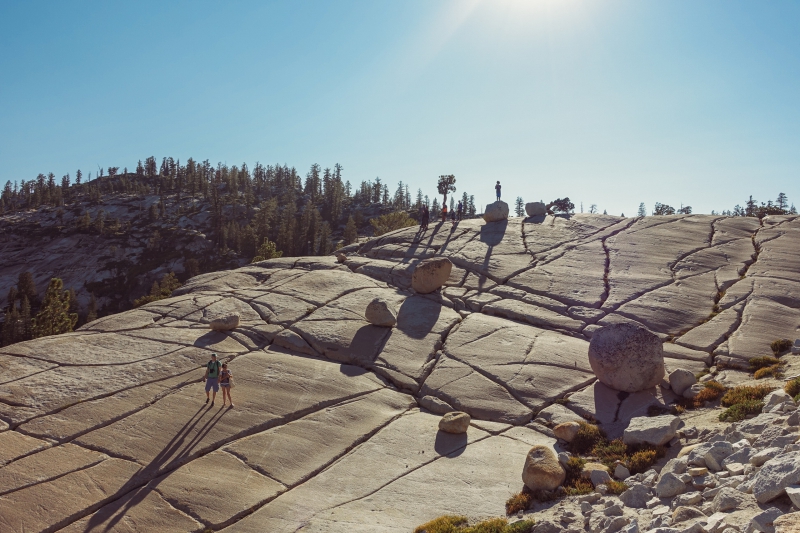 We were going to Porcupine Flat, but instead we found ourselves on a hiking trail in the woods. It turns out this was the Porcupine Creek trail. It was cool in the shade and sunlight filtered through the trees—it would have been a perfect place for a long walk. We only had time for a short one before heading back to the car. 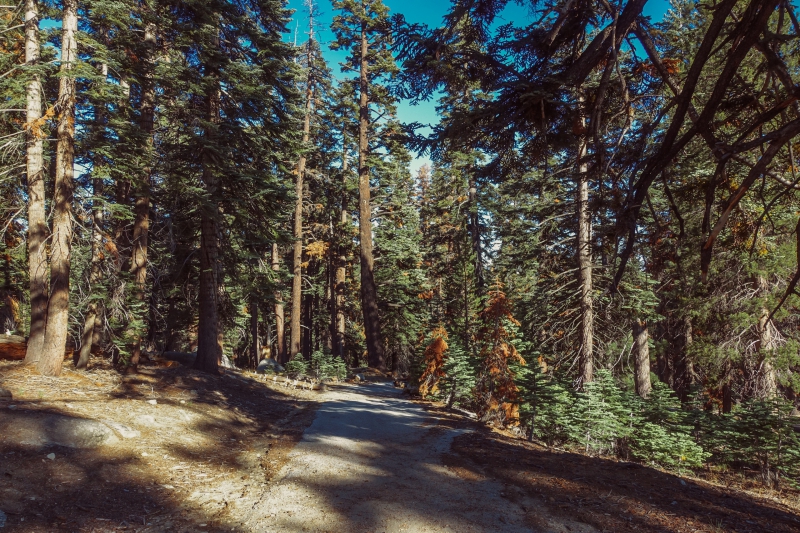 Also, we saw another bear while driving to our last stop. 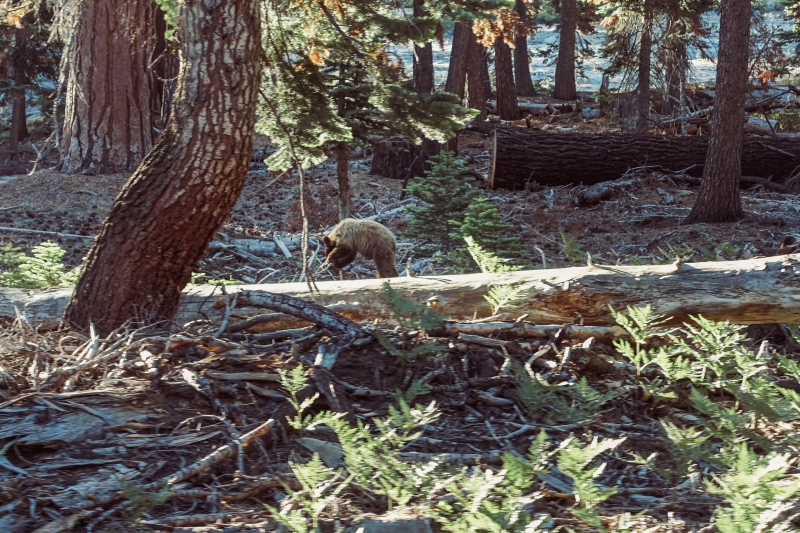 Earlier, I described how we drove through a dark tunnel and the world suddenly opened up.

It was bright and sunny when we saw it the day before. But now, it was a little different.

In the afternoon light, the sun smiled gently on this beautiful panorama from a distance. Farther off, the mountains were veiled in a half-haze. 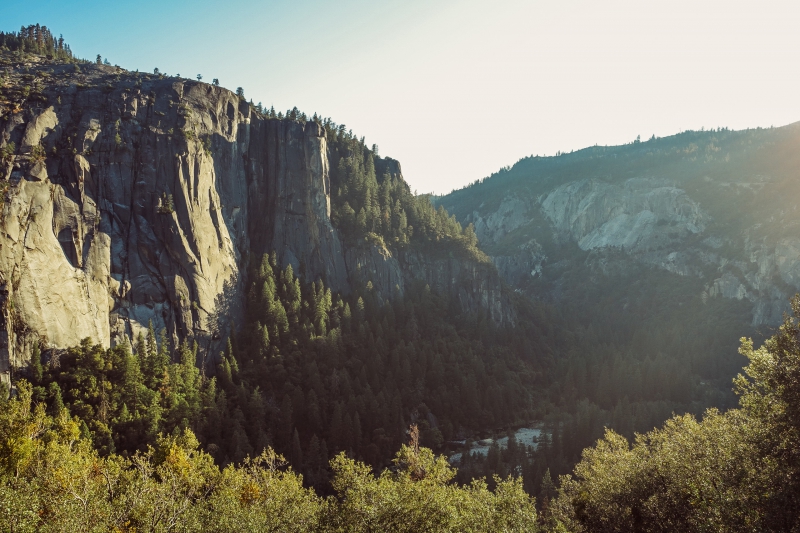 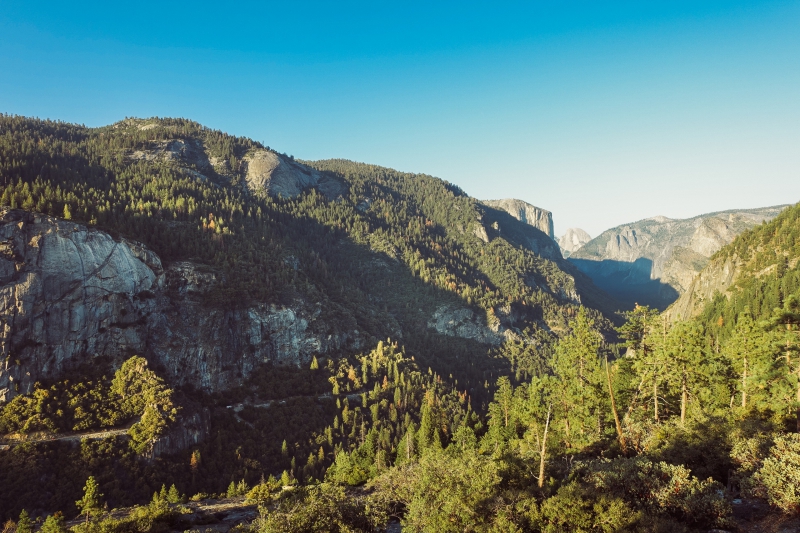 Along with Glacier Point, this was one of the best views we had of the mountains. While the scenery at Glacier Point was more expansive, we were at Tunnel View almost at sunset, which was an ideal time of day. 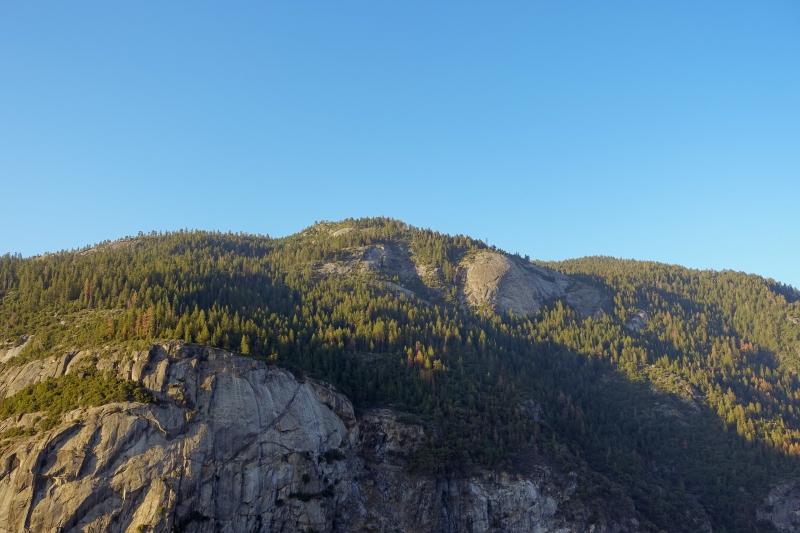 My photos of this view don’t do it justice. Someday I may just end up forgetting exactly how it looked in real life. But—as with the best memories—I’ll never forget how I felt when I was there.

It was the perfect end to our Yosemite trip.

And so we drove back home.

With Yosemite behind us, the drive seemed unbearably long. By the end of it, we were silent, restless, and anxious to get back to our apartments.

You might wonder if the amount of driving was worth the places we went.

For Yosemite, it was worth every mile.

But every once in a while, something wonderful happens.

You go to a place you’ve never been before. You marvel at beautiful meadows and rivers and lakes. You see bears in the wild. You catch a glimpse of something more—something beyond everything you previously knew.

The road is long. But it helps to have friends to drive with. And if you find yourself in a dark tunnel, just keep going. There’s a light at the end of it.

And if you’re lucky, there’s more than light. 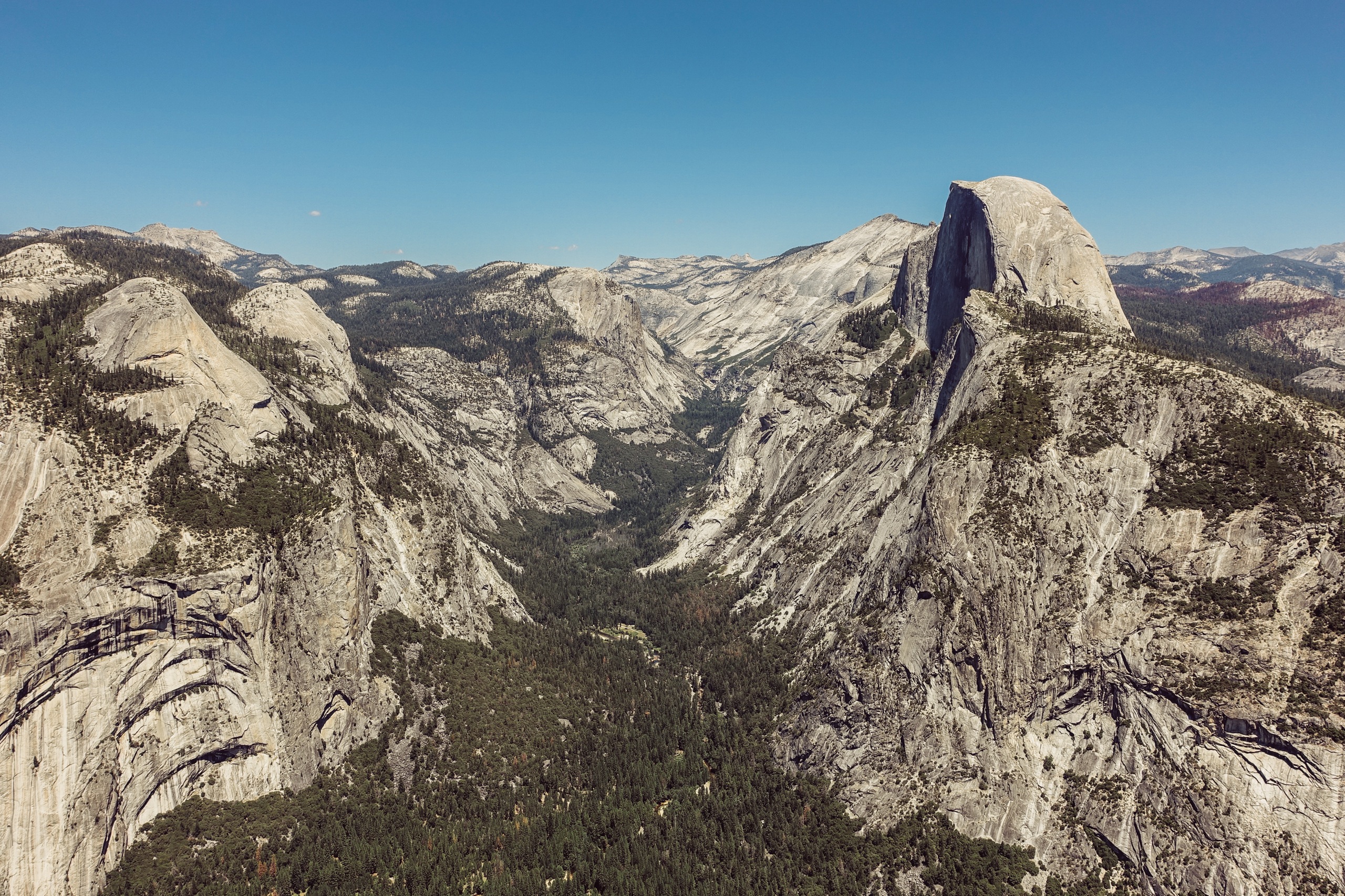 Car Rental: We booked a car on Zipcar, but there are plenty of standard car rental choices (Enterprise, Alamo, Hertz, etc.) in San Francisco.

Getting There: From SF, the shortest route is via I-580 E. From Palo Alto, you can get there via CA-120 E or CA-152. Google Maps says both routes take about 3.5 hours—but in my experience, Google drives fast and doesn’t need bathroom breaks. 4 to 5 hours is more realistic.

Accommodations: We booked a cabin on Airbnb, underestimating how far away it was from the places we wanted to go. Most Airbnbs are some distance outside the park. There are hotels, lodges, and B&Bs inside the park itself, so I would suggest staying there if you can—it’ll save you some driving time.

Mobile Networks: T-Mobile was totally useless in Oakhurst and Yosemite. To be fair, I’ve traveled to a few US destinations, and this was the first time T-Mobile failed me. Luis’s Verizon wifi stick worked in Oakhurst and at the bottom of the mountains in Yosemite National Park, but eventually faded away as we drove further into the park.

GPS: It might be useful to have an actual GPS or download offline maps beforehand. However, Yosemite National Park officially recommends going by paper maps and road signs because GPS isn’t always accurate in the area.

Bears: If you see a bear in a developed area, scare it away by making noise and yelling loudly. If you’re in a group, stand together to look more intimidating, but don’t surround it. The goal is to make it leave the area. If you see a bear in the wilderness, keep a distance of at least 50 yards from it—about the length 4 shuttle buses end to end.

There are many ways to enjoy Yosemite National Park—from easy walks to grueling hikes, and from campgrounds to historic hotels. Visit their official website for more information on what you can see and do.